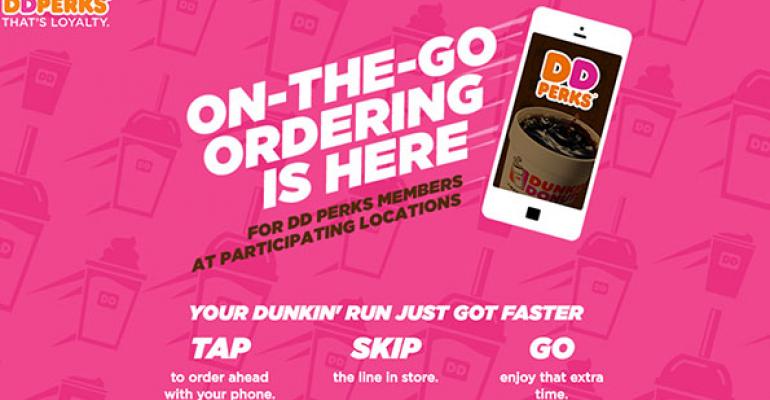 DD Perks members can skip the line for quicker pickup

Dunkin’ Donuts on Monday rolled out nationally a new app that allows loyalty members to order and pay ahead, and skip lines for pick up.

Dunkin’ Donuts’ On-The-Go app has been tested in Maine, Boston and the New York metropolitan area over the past several months.

The move brings 11,000-unit Dunkin’ Donuts in line with rival Starbucks, which last year rolled out mobile ordering and pay-ahead across its 7,500 company-owned locations in the U.S.

A growing number of other quick-service breakfast competitors have also made the order and pay-ahead move, including Taco Bell and, most recently, Chick-fil-A.

During parent company Dunkin’ Brands Group Inc.’s most recent earnings report in April, chairman and CEO Nigel Travis called the rollout of On-The-Go ordering “one of the most game-changing initiatives” in company history.

“Not only is it a way to drive membership to our loyalty program, but it is a clear demonstration of our commitment to enhancing convenience for our guests through technology-based initiatives,” Travis said.

The goal, said Travis, is to link the On-The-Go app with delivery, “a step that we believe can be very powerful in providing our guests even greater ease of use and access to the Dunkin’ Donuts brand,” he said.