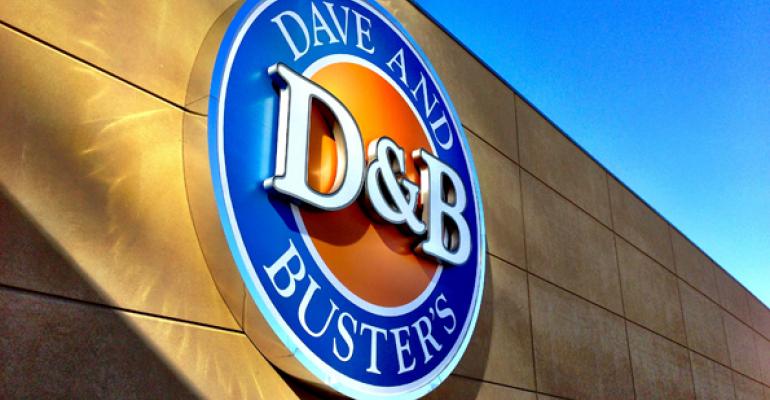 Dave & Buster’s Entertainment Inc. unveiled Thursday smartphone mobile versions of three popular arcade games that reward users with tickets as if they were in the restaurants, and are intended to build traffic and frequency.

The Dallas-based company, which has 76 restaurant-entertainment complexes, said the mobile games give users the ability to play in the digital world while winning prizes in the real world.

“Players redeem points for real-world ticket items that are automatically stored on their Power Card and redeemable for prizes at all Dave & Buster’s restaurants across the U.S. and Canada,” a spokeswoman said.

The games are available for both iOS and Android devices.

“Nearly every one of the guests who comes into our stores has a smartphone. That transforms the entertainment experience,” said Bachus, who joined Dave & Buster’s in the new position two and a half years ago. “People want to continue the experience when they go home. They want to take the games with them. They want to be able to interact with us.”

The three mobile versions introduced in app stores this week were of the popular Big Bass Wheel and Tippin’ Bloks, both developed by Robosoft Technologies, and Speed of Light, developed by Sarbakan.

Dave & Busters said the development teams expanded on the arcade-themed fun by adding new features to the mobile games, optimizing them for a smaller screen and integrating the technology that allows players to accumulate tickets and transfer them directly to the D&B Power Card, which are used to play the games in its locations.

Power Cards are available at the front-desk kiosks in Dave & Buster’s locations, and customers load various amounts of cash onto the cards.

The mobile apps help Dave & Buster’s address one of the biggest marketing challenges for restaurants, Bachus said, which is to keep the brand top of mind among consumers.

“These are not promotional apps, the quick little giveaway things,” he said. “These stand on their own as quality mobile games.”

But “the runaway hit game” in the Dave & Buster’s arcades was Big Bass Wheel, Bachus said, which benefited the brand by moving it to the smartphone.

“First, we wanted to make sure they were quality games, and second, we wanted them to feel like true mobile apps from the start, but yet still recognizable as adaptations of games they know and love,” he said. “And the third thing, which put the cherry on top, is we wanted to give our guests a reason to come back to the store.”

Brand engagement, he said, is a big piece of the mobile-app strategy, Bachus said, which includes “seeing the logo and thinking about us.”

“We give people the ability to win actual Dave & Buster’s tickets, which are automatically loaded onto their Power Card,” he said.

With those tickets awaiting them, customers might be drawn back in sooner than usual for a meal or drink, he added.

“They are free across all the platforms, but we do have some things we are tinkering with in the game where you can do an in-app purchase, like in Tippin’ Blocks you can buy a power-up that straightens up blocks,” Bachus said. “You can play without, but you can super-charge your experience.”

Next week, Dave & Buster’s is changing all the Power Card swipe readers on every game throughout all the arcades in the system, Bachus said. The new devices have touchscreens, which can show balances, and have radio-frequency identification (RFID) built in for possible use down the road, Bachus said.

The devices also allow customers to determine the option of getting paper tickets, as in the past, or electronic tickets loaded on the Power Card, which can be accrued on the app and at locations over a series of visits.

“It’s a much more attractive and convenient way of swiping the cards,” Bachus said.

Dave & Buster’s will measure success through both the number of app downloads and weekly-monthly users, as well as broader yardsticks, Bachus said.

“What is unique here is we’re looking to see if it has an impact on the number of visits or the amounts guests spend in the stores,” he said. “Many guests use Power Cards as a disposable on each visit. With this, because tickets are applied to the Power Card, we think it will make the individual Power Card more valuable and allow us to track visit.”

Dave & Buster’s arcades have between 140 to 170 games or more, and Bachus said there are many more options for game development.

Dave & Busters was founded in 1982 and went public in October 2014, raising $94.1 million. It has locations in the United States and Canada.