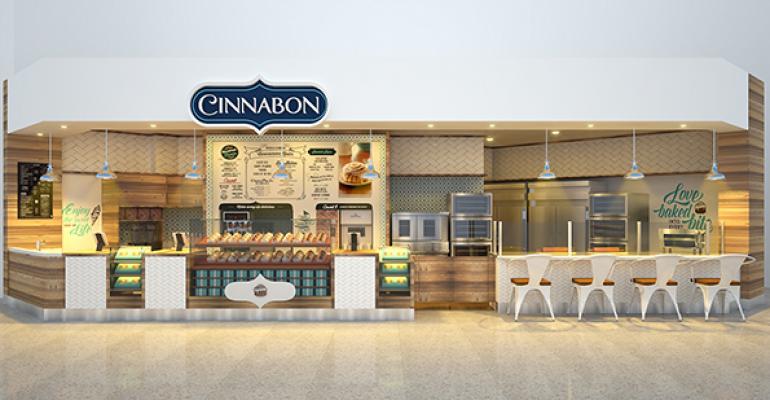 Joe Guith has been brand president of Cinnabon since August 2014, and since then has worked on updating the brand to make it more attractive to Millennials — both as customers and employees — as well as updating the brand’s point-of-sale system to make use of the latest technology.

He recently discussed his progress with Nation’s Restaurant News.

Tell me about it your new store model.

In research we did around brand architecture, clearly [Cinnabon] represents indulgence, but we found that people also associated it with belonging — with going to the mall with friends, and baking at home with mom.

We love the baking credentials of a French patisserie, but we also want approachability, because Cinnabon is for everyone. So we have French patisserie meets home kitchen as inspiration. You’re looking at lighter-tone woods, a lighter color palette in general, bringing in some more of the accent colors such as the teal [Cinnabon’s signature color].

What technology upgrades are you working on?

We’ve formed a partnership with Revel for point-of-sale. It’s iPad-based and can be integrated with back house [software], and it never goes down because it can spool transactions. So even if the Wi-Fi goes down it still works.

On top of that, from a hardware standpoint, if something goes wrong, guess what? We’re in malls a lot of the time: You pop that thing off, you walk down to the Apple Store, you swap it out, hit the download button, and you are back in business.

We can also do labor scheduling on it, which we didn’t have.

Are you accepting wireless payment now?

All locations that have the Revel system — we’re in about the 80 [unit] range right now, out of the 250 we have in malls — can accept Apple Pay.

We’re just now getting focused on labor scheduling. We had none of that. We’re now going to get focused on theoretical food cost. That might sound like, “You didn’t have what?”

I would have said that about scheduling, too, but even more so with about cost.

We had some franchisees that were doing it with their own systems, but we weren’t doing it as a company. You could say, “What were you doing? Were you a bad franchisor?” But at the prior [sales volumes] they couldn’t afford to pay for all these systems. When we started rolling systems like this at [my previous job at] KFC, they were tens of thousands of dollars. Now I’m doing it for less than a [traditional] point-of-sale [system]. So the ability to leverage that technology and deploy it, plus our pretty dramatic increase in AUV has brought us to a point where we can do it.

To what do you attribute the rising AUVs?

[Former president] Kat Cole and the team did a great job at getting buzz around what had always been a cult, iconic brand, and being scrappy around PR and social media and print.

There’s also been a lot of transfers of units from operators that weren’t a great fit to long-term multiunit operators of other brands. The combination of execution and buzz has really carried the day so far.