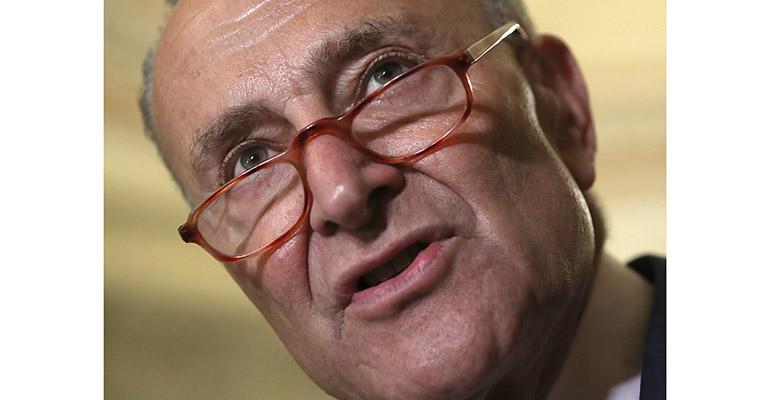 Schumer held a press conference in front of a Five Napkin burger restaurant in Manhattan on Sunday. He was there to discuss how the Manhattan blackout the night before had impacted small businesses, including restaurants. But the New York Democrat also took on another hot topic: Complaints that Grubhub is charging “fake” fees.

Restaurants have long been apprehensive of the delivery services they’ve come to rely on, but the latest bout of complaints started when restaurant owners discovered Grubhub, which is part of the same company as Seamless, was charging restaurants for phone calls made to restaurants through the company’s app — even when those calls don’t result in an order. The calls in question could be a customer inquiring about a particular dish or making a reservation to dine in. A class-action lawsuit was filed in Pennsylvania by Tiffin Indian Cuisine, a chain in Philadelphia and New Jersey, against Grubhub over these fees.

“Today, I am putting in my own order at Grubhub and asking them to eat any fees they wrongfully charged restaurants or even customers,” Schumer reportedly said on Sunday, weighing into a fraught debate.

“Fake” fees that @Grubhub is charging New York restaurants or even customers should stop.

If it’s an algorithm problem, they should put in an order to fix it.@SBAgov is investigating and must report the impact on businesses to Congress ASAP.https://t.co/h3jGfxr0Vn

In response to Schumer’s statements, a spokesperson from Grubhub wrote: “We welcome the opportunity to work with Senator Schumer, the U.S. Small Business Administration, and others to show our proven commitment to the restaurant community and disprove the flagrantly inaccurate narrative that our business practices are misleading or lack transparency […] We will continue to highlight the value we bring to local restaurateurs and to directly disprove false allegations about our business that have recently been spotlighted."

To Andrew Rigie, the executive director of the New York City Hospitality Alliance, who was part of the press conference, the senator’s statements were proof that the complaints from New York City restaurateurs were being heard across the country.

“Clearly, the concerns with Grubhub’s business practices have gone from just locally here in New York City to national concerns,” said Rigie. “We were happy that the senator wanted to come and support local restaurants.”

Restaurateurs & I stood with @SenSchumer & @MarkGjonajNY and called on @Grubhub 2 stop the bogus fees & engaging in questionable business practices. NYers love restaurant delivery & it can b great 4 biz but large delivery corporations must engage in fair and transparent practices pic.twitter.com/x5r6Q9y2yA

In late June, the Grubhub phone charges, among other complaints, led New York City Councilman Mark Gjonaj, to hold an oversight hearing to understand the impact of food delivery apps on the restaurant industry.

In what is widely considered the first hearing of its kind, representatives from the Grubhub and Uber Eats were grilled over business tactics and antitrust allegations were made. Grubhub controls nearly 70% of the food-delivery market in New York, and earlier this month Gjonaj asked New York Attorney General Letitia James to open an antitrust investigation into Grubhub.

New York State Liquor Authority rules, which stipulate who must be listed on a liquor license, were also discussed during the hearing. The New York Post reported that the New York State Liquor Authority would consider regulations that could impose costs and administrative requirements on the meal-delivery company when fees exceeded 10% of revenue. Meal delivery apps regularly take up to a 30% cut on orders.

Another concern for operators and a topic of the hearing was ownership of customer data.

“If a restaurant doesn’t own their own customer information, it’s very difficult for them to leave that [delivery] company,” said Rigie, adding, “Delivery can be great for the restaurant business, but we need to have a fair and transparent relationship.”