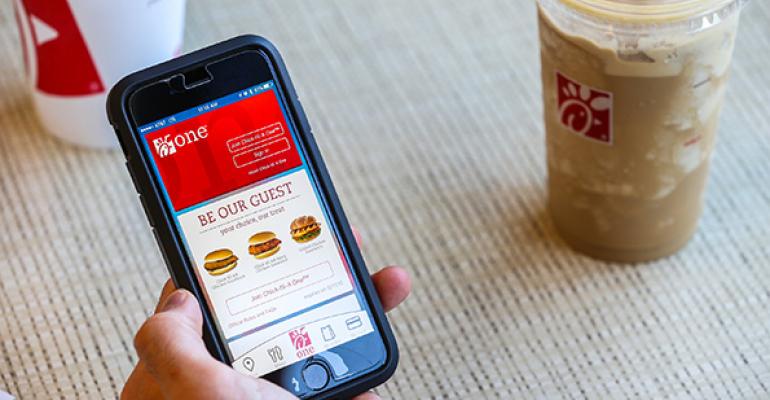 In a big push to please Millennial parents, Chick-fil-A launched Wednesday a new mobile app that allows users to order and pay ahead, customize meals and skip lines at the register.

Dubbed Chick-fil-A One, the new app also incorporates a rewards program that allows users to earn free food based on their preferences and previous orders. The app also lets them track their progress toward the next free offering.

The One app replaces Chick-fil-A’s former mobile app, first launched in 2012 with the addition of mobile ordering starting in 2013.

Why was a new app needed?

According to Chick-fil-A surveys, 82 percent of Millennial parents say they would do almost anything to avoid long lines at quick-service restaurants when they are with their children.

Almost half of those surveyed — 48 percent — said they would rather not eat at all than stand in a line, Chick-fil-A executives said.

“We know time is valuable, and we’re excited to offer this new convenience that will empower guests to order what they want, when they want it and exactly how they want it, all from their mobile device,” Michael Lage, senior manager of digital experience for Chick-fil-A, said in a statement. “This app was developed based on customer feedback, so it was specifically designed to give our guests an even more convenient and personalized experience in our restaurant.”

Once an order is placed, customers can check in at the restaurant, signaling the kitchen to fire the order so it is cooked fresh, the company said.

The app is the result of a significant investment in innovation by Chick-fil-A, which includes the creation of a 35,000-square-foot “Hatch” center at the 2,000-unit chain’s Atlanta headquarters.

The app is downloadable via Apple App Store or Google Play, and, in an unusual move, also on Twitter.

Within the chicken segment, Wingstop has invested heavily in digital ordering, saying mobile and online orders comprised close to 16 percent of sales during the March 26-ended first quarter.

Popeyes Louisiana Kitchen has also pledged to make a push into technology that it says will show results by the end of the year.