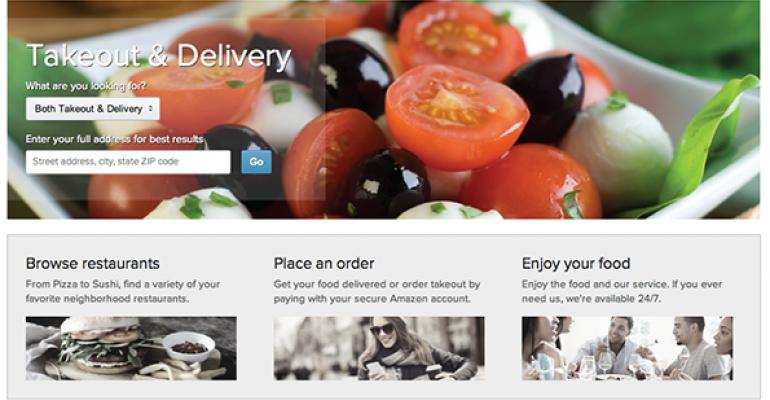 Customers in Seattle can order, pay through existing accounts

The service provides competition for similar existing services, such as GrubHub Inc. and Delivery.com. So far, Amazon’s service offers takeout and deliveries from about 100 Seattle-area eateries.

The Seattle test also allows customers to pay for food using their Amazon accounts. The company doesn’t actually deliver the food, but it connects patrons to restaurants that do.

Amazon’s media representatives had not responded to emailed questions by press time. Amazon reportedly allows restaurants to charge whatever delivery fees they want and set minimum order amounts as well.

“It remains to be seen just how Amazon’s offering will compete with the multitude of different companies that offer a similar service, if not one that is fairly refined at this point,” David Murphy wrote in PC magazine.

Those similar services, such as Chicago-based Grub Hub, which merged with rival Seamless in 2013, are giants in comparison to the one-city Amazon test. GrubHub said it now covers more than 600 cities and represents about 28,800 restaurants.

Those existing services could be a hurdle for another startup, Murphy of PC magazine noted, “especially if these competing services will happily go get your order for you and bring it to your door—allowing them to include more restaurants on their lists and, as a result, more interest from customers.”

The market for takeout and delivery is large. The National Restaurant Association says NPD Crest surveys found 75 percent of restaurant traffic is “off-premise,” which includes delivery, takeout, drive-thru and curb-side.

Delivery competition has been increasing, with additional companies expanding into the space. Fast-growing taxi alternative Uber in August debuted the smartphone app-based UberFresh, a test service that connects restaurants with Uber drivers to deliver customers’ meals.

Uber claims it will deliver lunch meals from local restaurants in less than 10 minutes, and it offers the local options on its dedicated UberFresh blog.

On Monday, Uber announced that it was expanding its lunch UberFresh offerings in Los Angeles to include dinner as well.

“The catch is that Uber's Seamless killer is only operating in two areas currently: Beverly Hills/West Hollywood and Westside Los Angeles,” reported Business Insider on Monday, which added that the UberFresh blog said the company “will continue to expand to other neighborhoods soon.”

Some major quick-service restaurants such as Burger King in the U.S. and McDonald’s in Australia have set up their own delivery services in some cities to compete with a growing number of separate delivery companies.

And a number of start-up, specialty companies -- from TryCaviar and Munchery, both based in San Francisco, to Seattle-based Peachd and Baltimore-based OrderUp -- have entered the market.

“There are several startups going after food, but there are over 600,000 restaurants in the U.S.,” Scott Stanford, co-founder of Sherpa Ventures and an investor in Munchery, recently told Geekwire.

“If the market has already proven that it can support that many restaurants,” Stanford said, “I would argue that there is room for one, two, five or 10 more coming at it from a completely different angle.”