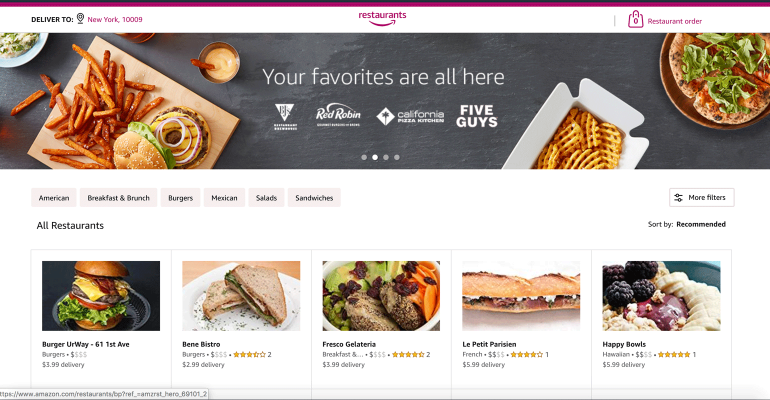 Amazon.com Inc. is shutting down its Amazon Restaurants delivery service.

The Bellevue, Wash.-based retail giant will close down Amazon Restaurants on June 24, according to a report Tuesday in GeekWire.

“We will be discontinuing the Amazon Restaurants business in the U.S.,” an Amazon spokesperson confirmed by email. “A small fraction of Amazon employees are affected by this decision, and many of those affected have already found new roles at Amazon. Employees will be offered personalized support to find a new role within, or outside of, the company.”

Online food-ordering companies like Olo had integrated Amazon Restaurants into their platforms.

In January 2018, Gus Lopez, then general manager of Amazon Restaurants, told an ICR investment conference panel that the online giant had found that speed and reliability determined customer attitudes toward brands.

“One of the big commitments we have as a company in general is focusing on the customer experience,” Lopez said. “This is a space that’s prone to lots of errors. What we are trying to do is sit back and go through every possible thing that could go wrong and try to prevent that from happening.”

But Amazon isn’t out of restaurant delivery entirely.

Last month, the company led a $575 million funding round for Deliveroo, a U.K.-based food delivery company. Amazon also delivers groceries through Whole Foods Market, which the company purchased in 2017.