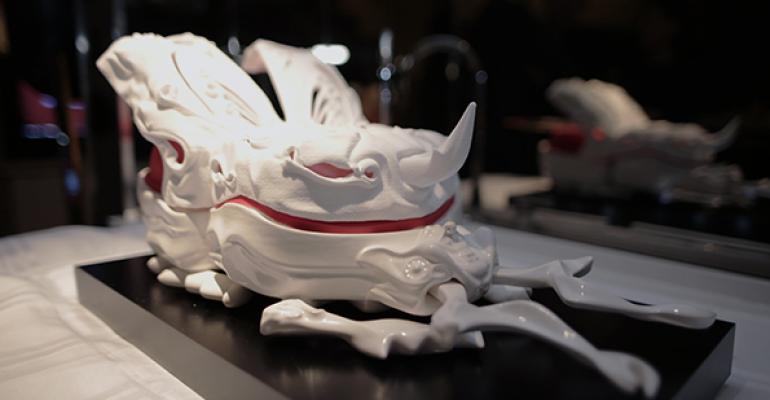 3D printing could be ‘game changer’ for foodservice

Three-dimensional printing could be a tool in a whole new realm of food preparation and presentation, and The Culinary Institute of America is working to be part of that process.

The premier culinary school, based in Hyde Park, N.Y., has partnered with three-dimensional printing company 3D Systems Corporation, of Rock Hill, S.C., to develop applications for the ChefJet Pro, a 3D printer designed for fabricating food.

The partnership will include fellowships for CIA students at The Sugar Lab, its 3D printing culinary center in Los Angeles, which is slated to open to the public this spring. The CIA and 3D Systems said they also plan to hold a series of conferences and seminars on the technology.

The CIA announced the partnership last week at the Consumer Electronics Show in Las Vegas, where Thomas Vaccaro, the school’s dean of baking and pastry arts, used a 3D printer to create a ceramic piece of bakeware shaped like the bottom half of a beetle, based on beetle jewelry designs. The bakeware was filled with a cake covered with vanilla glaze and red fondant. It was topped with an “exoskeleton” made of flavored sugar, produced with the 3D printer, and complemented with traditionally pulled sugar wings.

“The combination of traditional baking and pastry technique, combined with this new technology, is allowing for a whole new world of creativity and personalization for chefs. Desserts like this would not be possible without the use of 3D printing,” CIA communications director Stephan Hengst said in an e-mail.

“It’s part of the decorative aspect, but it’s completely edible,” he said.

Vaccaro said he hoped he and his colleagues would find broader applications for the technology.

“We don’t have the crystal ball, but our sense is that the technology is sound enough to potentially be a game changer in the industry,” he said, adding that the main reason for the partnership with 3D Systems was to explore those possibilities.

“This partnership is about exploring innovation. We have a bunch of really bright engineers and a bunch of chefs who are going to get together and start innovating and see what happens,” he said.

Some pastry chefs already use 3D printers to make cake decorations and more. Kate Sullivan, owner of Cake Power in New York City, which makes custom sculptural cakes for weddings and other events, uses 3D printers to make specialized molds into which she has poured chocolate. “The results have been really great,” she said, adding that she’s just in the early stages of exploring the printers’ potential.

“It’s sort of a fascinating moment in time for that,” she said, noting that the CIA’s involvement could have unexpected applications elsewhere.

“The whole structure of the way 3D printing is developing is that people are talking to each other,” she said. “Someone who is working on a food thing could figure out something that could then be passed on to someone who is working on growing cells and working on printing a human ear. … I feel like we’re at a time of shared information and people working together, and whoever brings it to the next level shares in that. If the CIA has a machine and they’re experimenting, they’re going to be part of that process.”