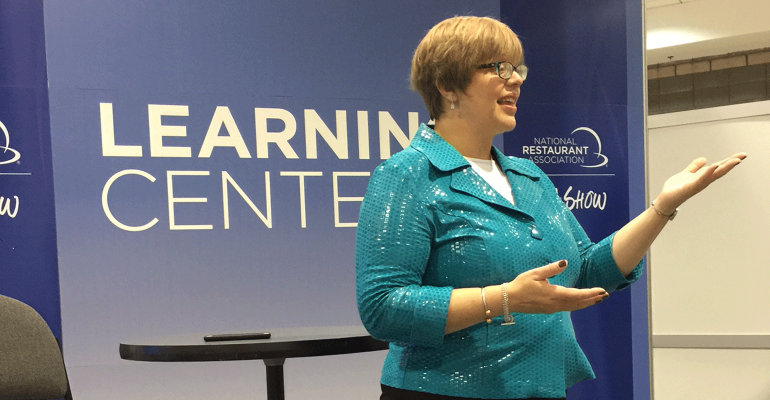 At an NRA Show session on Saturday, titled “Trends in Training,” Herbel outlined three training tools that can open up a world of opportunity for restaurants.

1. Micro-learning: Sometimes also referred to as “chunking,” micro-learning involves training employees in short bursts to model a specific skill, behavior or event at the point of question.

Herbel pointed to Yummly videos as an example. The three- to four-minute videos demonstrate how to do specific tasks, like mincing garlic.

Many loyalty programs have a gaming component, such as buy five, get the sixth free offers, Herbel said. They don’t have to involve technology.

But game apps like Cooking Dash or Diner Dash also provide a simple format for competitive educational games, she said.

Game designers can help trainers build simple games. Herbel said they don’t have to be tech-enabled, but can be simply about participation in some way.

Kahoot, for example, is a free educational resource that allows trainers to design and develop any kind of quiz or interaction on a smartphone.

Such games works best when they offer a leaderboard that introduces a competitive element, allowing participants to earn points and become champions for learning, she said.

Yelp, for example, has an augmented reality app that allows users to point their camera down a street and read reviews of restaurants in the neighborhood.

Herbel said similar technology could be used to train workers about new menu items, she said.

Perkins has a printed binder with recipes, but those pages also have a Zapcode, or a code that can be read with the Zappar app, which makes the information come to life as a 3D image, rather than a one-dimensional photo. The technology is used more commonly in other countries, often for marketing.

About three years ago, McDonald’s in Australia had a “Track My Maccas” campaign that let customers click an augmented reality code on their burger box to see the story of the item’s ingredients and where they came from.

They key to such tools is that they motivate participation and build loyalty, Herbel said.

“And people can start and stop on their own time and set the pace for their own learning,” she said.