Toward the second half of 2021, labor shortages became the number one gripe of restaurant operators. Among personnel benefits and recruiting changes, one of the tactics restaurants took was to invest in more autonomous technology that could do the jobs they weren’t able to hire for.

McDonald’s CEO Chris Kempczinski said in June that the company was testing autonomous drive-thru technology at 10 units in the Chicago area, which will be able to lighten the load of employees in the future, but isn’t quite ready for prime-time yet. Buffalo Wild Wings meanwhile announced in October that the company is testing out a partnership with Miso Robotics to “hire” a robot that can fry wings.

Alongside these more preliminary tests, several brands are also trying out autonomous delivery that could eventually eliminate or lessen the need for delivery drivers, like Domino’s’ Nuro bot which went for a test run this April in the Houston area.

Some technology could eliminate the need for human interaction entirely, like AI startup Wings, which will be launching a human-free smart AI food-making system, Nectar, in 2023.

2021 was a tale of two types of ghost kitchens: The first was the continuation of established restaurant brands like Inspire Brands looking to expand their reach and digital capabilities with virtual locations or even launching side-brand spinoffs like Red Robin and Chick-fil-A, which launched Little Blue Menu in September.

The second type of ghost kitchen news that dominated 2021 was the explosive growth of burgeoning virtual restaurant empires like C3 and Virtual Dining Brands and ghost kitchen operator, Reef. Practically every week, these three (among other virtual restaurant companies) announced new brand and celebrity partnerships while the number of virtual restaurants grew by the thousands transforming from 2019’s trend to 2021’s mainstream operations strategy.

During the pandemic when consumers began relying heavily on third-party delivery, local regulations came down hard on Grubhub, DoorDash, and Uber, instituting delivery fee caps (some permanent) which led to an evolution in third-party delivery offerings to continue enticing disgruntled operator customers.

First DoorDash, and then followed by Uber Eats/Postmates, rolled out tiered commission pricing to offer operators the choice of paying higher commission to get more perks or fewer fees to pass those onto the customer.

“We want to be wherever our customers are,” Shake Shack head of digital experience Steph So said during a November CREATE digital keynote. Increasingly, where guests are is not the dining room: they’re ordering food at drive-thru lanes and pickup windows, picking up their orders via contactless curbside delivery, and asking for delivery to their homes or elsewhere.

So, what are operators doing? They’re overhauling their restaurant designs to shrink dining room spaces and make room for first-ever pickup lanes, like Pizza Hut and Chipotle, which just debuted its first-ever digital restaurant with a pickup lane and they’re introducing triple drive-thru lanes or making over the inside of their restaurants, like the new Papa Johns restaurant redesign which emphasizes takeout convenience for digital customers.

The drive-thru lane gets a makeover

Drive-thru is the QSR element that is arguably getting the biggest technology makeover, like the new Taco Bell Defy store design, which has four drive-thru lanes with three dedicated to mobile or delivery order pickups, a much smaller store design, and digital QR codes where customers will scan their order and watch their food being delivered to their car by a contactless proprietary lift system.

We’ve already spoken about AI in the drive-thru lane which can take the place of employees with higher order accuracy but Bite Ninja also launched in 2021, which outsources drive-thru operations to gig workers working from home, while customers can interact with them via video chat.

As technology options grow, companies are scrambling to bundle them together to make it easier for operators to create a tech stack. Whether emerging restaurant technology solutions brands merged with one another or were bought by restaurant chains like Yum’s purchase of Dragontail Systems in September, which coordinates the process of getting food to customers from the time digital orders roll in, to when drivers are dispatched.

Getting technology to behave well together and stack easily is the next big hurdle for operators. Yelp, for example, launched Guest Manager in September: a platform that bundles the company’s front of house features — including some new ones — like reservations, POS integration, takeout, curbside pickup, and table management into one “fully integrated solution.”

Besides figuring out how to get their tech solutions to behave well together, many operators are turning to proprietary technology solutions and managing their own off-premises platforms to save money on commission fees and become more independent. Companies like Lunchbox and InHouseDelivery.com encourage operators to DIY digital guest management and even offer their own delivery services. In August, Lunchbox acquired New York City-based digital marketplace, Spread to build a commission-free delivery platform with mom-and-pop restaurants in mind.

One of the biggest criticisms aimed at third-party delivery has been that operators relinquish control of precious customer data to the delivery companies. But as restaurants figure out that customer data is becoming increasingly important to provide personalized customer experiences and targeted marketing, that is changing. In May, Grubhub set up direct ordering, which allows restaurants to use the Grubhub platform to set up direct ordering through their website and obtain access to customer data. And CRM companies like Thanx are empowering restaurants to own their data and leverage it in building guest loyalty.

Many of the largest restaurant companies use customer data to inform operational decision-making, like Domino’s which handles its own consumer data and has long-since touted its status as the last pizza chain holdout not on delivery platforms. In April, Starbucks CEO Kevin Johnson said that the company has been testing detailed customer personalization via its Deep Brew AI technology.

Contactless persists beyond the pandemic

Contactless restaurant experiences began as shorthand for pandemic-era safety precautions, but have persisted after COVID lockdowns. Contactless payments with just a tap of a phone have become the norm and 21st century automats like the Piestro portable pizzeria have popped up with practically zero need for human interaction.

The quick-service experience of the future might look like this new Starbucks store prototype which launched in November in partnership with Amazon Go: customers can use their Amazon app or credit card to scan into the store and pick up food or drink from the marketplace and just walk out, where they’ll be charged via the aptly named Amazon Just Walk Out Technology. 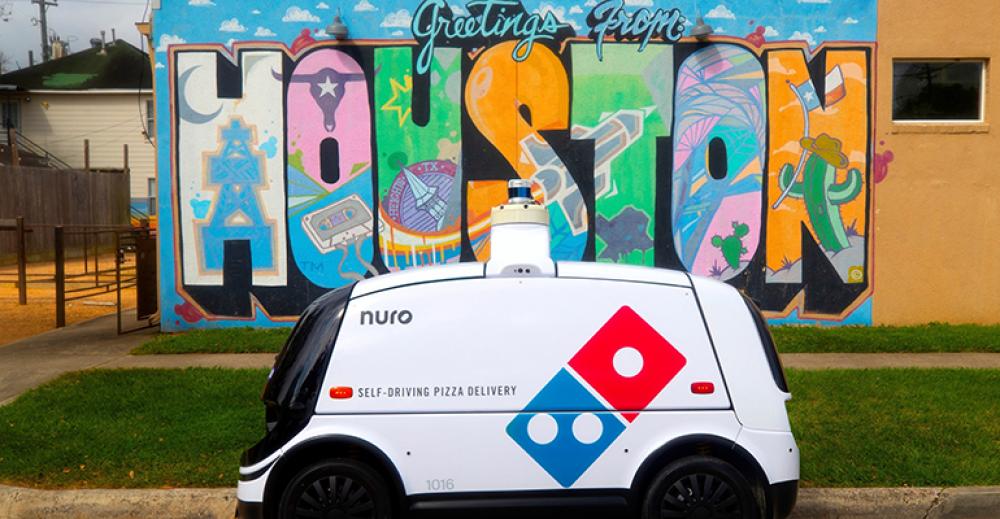