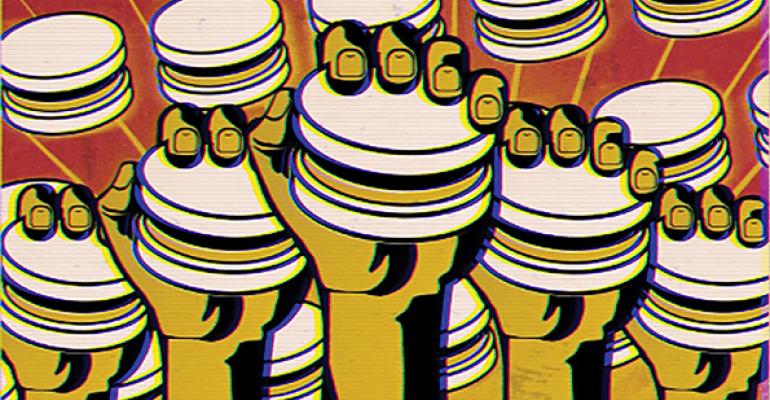 Taco Bell Corp. will launch a Biscuit Taco nationwide on Thursday, along with a new crispy chicken option and a marketing campaign designed to spark a breakfast revolution, the company said Tuesday.

The new Biscuit Taco features a flattened buttermilk biscuit, folded over like a taco, stuffed with crispy fried chicken and topped with either jalapeño-honey sauce or Southern-style gravy. Another version is available with scrambled eggs, cheese, and bacon or sausage.

“We’re taking the traditional Southern breakfast and making it portable,” said Taco Bell CEO Brian Niccol. “Nobody has anything like this and you can get it at a terrific value.”

The crispy chicken featured in the breakfast taco — marinated white meat chicken coated in crushed tortilla chips — is a new protein option that will appear elsewhere on the menu and can be swapped in for other proteins.

For a limited time, starting Thursday, the chain will feature three new items:

• The Chickstar: Crispy chicken with Cheddar cheese, lettuce and tomatoes, wrapped in a warm flour tortilla and grilled, along with sauce options like Mango BBQ, Creamy Chipotle or Bacon Ranch, for a recommended $3.99.

• Crispy Chicken Grillers: A smaller snack version as part of the more value-positioned Grillers line, with the crispy chicken wrapped in a tortilla and grilled with the various sauce options, for a suggested $1.69.

• The Double Crispy Chicken Quesadilla: The chicken is combined with a three-cheese blend and a creamy jalapeño sauce, folded into a freshly grilled tortilla, for a recommended $3.99.

A multichannel marketing campaign to support the rollout will focus on Taco Bell’s attempt to “break the sea of sameness” that dominates the morning daypart, and “defect” to a new kind of breakfast, said Chris Brandt, Taco Bell’s chief marketing officer.

Developed by Deutsch LA, the campaign borrows imagery from Soviet Communist propaganda posters of the 1920s and ’30s. Younger consumers, however, will likely associate the imagery with the mythical totalitarian regimes portrayed in movies like “The Hunger Games” and “Divergent,” Brandt said.

In Taco Bell’s case, the evil regime is the “Routine Republic,” a gray, dystopian world ruled by soldiers in creepy clown makeup, where “happiness is eating the same breakfast.”

The commercials are filled with amusing references to McDonald’s, the quick-service breakfast leader, and its iconic Egg McMuffin, along with other similar circular breakfast sandwiches.

“McDonald’s has done a great job of developing a routine around breakfast for most people,” Brandt said.

Hints of the campaign began subtly on Monday. Taco Bell put up posters in several major cities promoting the notion of eating the same breakfast every day — without any Taco Bell branding. Each, however, notes the website RoutineRepublic.com, at which propaganda films from the “Routine Republic’s Department of Information” can be found.

On Tuesday, commercials that explain the oppressive rule of the Routine Republic and the revolution at hand will begin airing.

On Thursday, another set of commercials returns to the real world, with spotlights on “Breakfast Defectors,” who had the courage to try something new at Taco Bell.

Brandt said the message is simple.

“We’re pushing against the breakfast routine,” he said. “The same is lame. Let’s try something different.”

The TV ads will run through March and April, Brandt said, and Taco Bell has more innovation planned for breakfast.

Cap’n Crunch Delights — a pastry designed to evoke a bowl of Cap’n Crunch’s Crunchberries cereal — is also expected to debut later this year.

“We will continue our pressure against breakfast,” Brandt said. “We are in breakfast for the long term.”