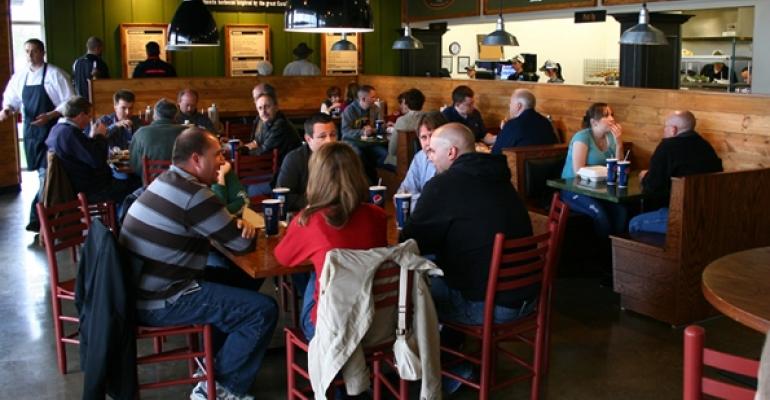 Fast-casual chain Old Carolina BBQ could reap cost savings and the “green” cachet that results from a greater focus on sustainability, and leaders of parent company Ichor Restaurant Group credit the enthusiasm of a franchisee for sowing that effort.

He received permission from Ichor to pursue those initiatives, including attaining LEED certification for the new building in Mentor, despite the franchisor not having plans of its own for aggressive sustainability.

“We haven’t done this in our corporate stores yet, but we’re watching what he’s doing with it and guiding him with some of our suppliers,” Bailey said. “We hope to learn something from it and maybe adopt these things.”

Schafer, who said he was encouraged to “run with it,” has reduced build-out costs for the Mentor location by 33 percent, compared with his first restaurant, using tactics like running all the utility lines through two common walls, cutting costs from furniture package, and building countertops from recycled rubber.

In his first unit in Lyndhurst, he developed a “fire-on, fire-off” schedule of utilities to conserve energy used to operate the restaurants smokers, fryers and ovens, rather than leave everything running all day. The schedule led to a 50-percent reduction in the restaurant’s utility bill in the first month, Schafer said, and the procedure will be in place in Mentor from day one.

With the Mentor restaurant now open, he plans to retrofit as much of the LEED-certified unit’s practices into the first location as possible before focusing on the next three Cleveland-area units he has agreed to open. Ichor might retrofit some of the features as well, Bailey said.

Schafer said Ichor afforded him the flexibility to pursue his interest in sustainability not just because of his passion for the initiative but also because he wants to spread the practices to other franchisees that might join the company. He is working with Ichor to consult prospective franchisees on site selection and build-out.

“I understood that in order for my store to be more successful, there needed to be more validity to the brand, which we can create with more franchisees,” Schafer said. “Making the brand more attractive by cutting costs for the operators, working one-on-one with the franchisor and along the way creating some brand loyalty with the things I’m doing, will make more people want to buy the franchise.”

Bailey said Old Carolina’s next franchisee will open a restaurant in Ann Arbor, Mich., next year, and added that Ichor has received interest in Old Carolina and Smoke from operators in Michigan, Florida and Texas. Conservative plans are to double the number of Old Carolinas next year from eight to 16 units, likely with the help of forthcoming private-equity backing, he said.

“We’re a company looking for partners that maybe don’t want to build across the country, but they want the Ichor brands to complement each other,” Bailey said. “There’s a lot of room to be successful between two units and 1,000, and we’re happy anywhere along the way.”