Little touches that highlight attention to detail appeal to many restaurant-goers these days. That’s illustrated by the trend toward pickles that are either made in house or sourced from small-batch producers. Charleston, S.C.-based chef Sean Brock had his own pickles on display at the 2014 Food & Wine Classic in Aspen.

A growing interest in safeguarding the environment dovetails with the need to manage costs to make food waste an important issue to chefs.

Herb walls in restaurants, rooftop beehives and farms owned by the restaurants themselves, or by their neighbors, have all become sources for ingredients in restaurants, and that’s something chefs expect to continue in the coming year.

Concerns over safeguarding the planet have gone mainstream, and that means striving for sustainable seafood, such as this keta salmon from Alaska, whose state constitution requires that sustainable fishing practices be followed.

As part of a trend away from food perceived as excessively “processed,” many consumers are looking for food made the way our ancestors ate it. Hence the term “ancient grains,” which can mean anything from amaranth to teff to quinoa to millet to varieties of wheat, corn or rice that are not seen as commodities. Starbucks’ Ancient Grain Flatbread, seen here in its Chicken Santa Fe Panini, is made mostly of organic Khorasan wheat.

Telling guests where food comes from physically — such as from a local farm or small-scale producer — is one approach to helping them feel connected with their food. Another is telling them the origins of the dish itself. Serving creations with origins in distant lands helps guests go on an adventure without leaving town. So does serving food that springs from the local community, like the tacos pictured here at Yellow Coyote Tortilla Factory in Carlsbad, Calif.

Helping young people eat better is a national concern, and chefs see that trend continuing with items such as the grilled chicken strips paired with unsweetened applesauce that were introduced at Smashburger ealier this year.

Many restaurateurs are looking to reduce their carbon footprint and engage in other practices that will reduce their impact on the planet. That was a priority at The Greenhouse Tavern, pictured here, which is Ohio’s first LEED Certified restaurant.

A sign of growing interest by many consumers about where their food comes from, many restaurants are now stating on their menus which local producers are supplying them.

Many chefs are expanding beyond the fine-dining world to spearhead new fast-casual chains, including The Little Beet, pictured here, by chef Franklin Becker.

The relatively low startup cost of food trucks, combined with stiff competition and high prices for prime real estate, has given young entrepreneurs the impetus to open their first restaurants on wheels, according to the NRA’s “What’s Hot 2016 Culinary Forecast.” Numerous food trucks on both coasts have been successful enough that their founders have moved on to brick-and-mortar operations.

Small touches can go a long way. Making ice cream in-house or having it custom-made for your restaurant is a trend chefs see continuing into 2016. Ice cream truck chain Coolhaus has made a thriving business of this trend and features ice cream such as the cream cheese and rye flavor pictured here, made with a cream cheese and mascarpone base with crumbled rye cracker swirled into it, served between a black-and-white cookie.

Rising commodity prices, particularly for beef, and a general sense of culinary adventure, are opening the door in terms of both supply and demand for relatively new or less frequently utilized cuts of meat, such as the teres major, or shoulder tender, pictured here.

Probably driven by the runaway success of Sririacha sauce, chefs surveyed by the NRA see condiments and spices that are popular overseas resonating with their guests.

Housemade charcuterie keeps culinary tradition alive and can give chefs added credibility among their guests and peers. Curing whole hog legs for prosciutto or other ham can be costly and time consuming, but the cost of entry for housemade sausage is considerably lower. It’s also a specialty of The Cannibal, a New York restaurant that plans to go bi-coastal this winter with the opening of a new location in Culver City, Calif. Its cornbread sausage dish is pictured.

Many chefs at independent restaurants, and even at some hotels, are purchasing whole animals and breaking them down themselves. As a result, small-scale butchery has become en vogue.

Local fruits and vegetables resonate with customers and speak to seasonality like nothing else, which is one reason why salad chain Sweetgreen highlighted local radishes in the Roasted Salmon + Radish dish it promoted this spring, which also included organic arugula and kale, beets and carrots in a mustard-oregano vinaigrette.

Ethnic-inspired breakfast items
Courtesy of the National Pork Board

In our melting pot society, ethnic-inspired breakfast items resonate with many consumers, according to the chefs surveyed by the National Restaurant Association. So it should come as no surprise that at the “Pork Summit” held earlier this year at the Culinary Institute of America’s Greystone campus in St. Helena, Calif., Paul Carmichael, who at the time was chef at Ma Pêche in New York City, made these Mexican-inspired chilaquiles. 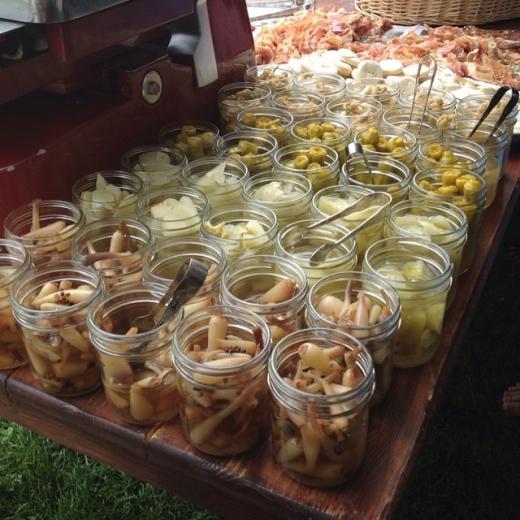