Famous chefs including David Chang and Thomas Keller have joined a growing list of operators offering this staple. Keller’s doing it at Addendum restaurant in Yountville, Calif., and Chang is offering fried chicken sandwiches (pictured) at two Fuku locations in New York City.

Newfangled versions of this American classic include one flavored with Cheddar cheese at Qui in Austin, Texas, and a do-it-yourself offering at The Meatball Shop in New York City, where guests are brought out house-made cookies and ice cream and are set loose to make their own creations.

Ice Cream Sandwich chain Coolhaus has introduced a line inspired by Jewish delicatessen, including the Reuben (pictured), made by combining a Marbled Rye cookie (chocolate and vanilla whoopee-pie style cookie with caraway seeds) and pastrami ice cream, which is made with an ice cream base containing a savory “special sauce” by boutique ketchup manufacturer Sir Kensington spun with caramelized pastrami.

Freeman said diners have shown a willingness to pay for these pricey sandwiches that are popping up across the country, including the growing Lobster ME chain. Uno Pizzeria & Grill introduced lobster rolls (pictured) as a limited time offer this past summer, too.

Restaurants seeking the next frontier of house-made items have started buying small grain mills to grind their own flours. Freeman said restaurants doing that include Baker Miller in Chicago and Josey Baker Bread in San Francisco.

Poke, a Hawaiian dish made with raw fish, salt and a wide array of flavorings is becoming a staple in Los Angeles. Freeman points to restaurants elsewhere, such as Liholiho Yacht Club in San Francisco, Poke to the Max in Seattle and Noreetuh in New York City as Hawaiian-oriented restaurants that are helping to spread the trend.

Freeman said cucumbers are the “it” vegetable, and restaurants are sourcing different varieties of them and using them to “add texture, coolness [and] freshness” to dishes. Freeman pointed to restaurants including Superiority Burger in New York City, which smashes cucumbers and mixes them with yogurt, jalapeño honey and crushed sesame breadsticks, and MY China in San Francisco, which serves honey-glazed cucumber shrimp with wasabi.

“Why not throw caloric caution to the wind once a week?” Freeman asks, noting that dishes such as French toast and pancakes with duck-liver butter abound. He points to Brioche French Toast with Foie Gras frosting at Longman & Eagle in Chicago as an example of this trend.

IHOP, no stranger to indulgent breakfast, added new treats to its morning mix with items such as its summertime special of Cinnamon Sugar Double-Dipped French Toast, garnished with cinnamon sugar and whipped topping (pictured).

“Vegetables are the hero this year,” Freeman said, and that doesn’t necessarily mean vegetarian or vegan. Vegetable portions are rising and meat portions are shrinking — something many Millennials see as being gentler on the planet.

“People want less animal protein and are requesting that veggies are ramped up to their fullest creative potential,” Freeman said, noting that Bon Appétit magazine’s restaurant of the year went to Al’s Place in San Francisco, where meat dishes are served as sides.

Items such as Indian Somosas, Central American empanadas and Chinese dumplings are popular and are being served at places like Russ & Daughters in New York, which recently opened a café that offers items such as cheese blintzes, and Sens Restaurant in San Francisco, which offers chorizo empanadas. As part of its Chinese New Year menu in February, P.F. Chang’s offered Flaming Pork Wontons in spicy garlic and sesame soy sauce, finished with scallions (pictured).

Freeman said the “once overdone tableside salad and flambé cart” are coming back in new forms, sometimes with the chef or sous chef performing tableside. Restaurants returning to that service style include the Barcelona Wine Bar chain, which slices its cured Mangalitsa pork tableside; and Poggio Trattoria, which serves its Italian bollito misto tableside.

NRN recently reported on the trend of restaurants rolling out carts for dim sum-style service. Among those restaurants is Church Key in Los Angeles (pictured).

Going beyond burgers, these small sandwiches have become carriers for many fillings, Freeman said, including Rock Cod Sliders at the Hungry Cat and shrimp cake sliders with Sausalito Springs watercress at The Dorian in San Francisco.

Arby’s rolled out a line of non-burger sliders (pictured) earlier this year as permanent additions to the menu and reportedly sold 29 million of them in their debut month of September.

Sous-vide machines are used to change texture of root vegetables and melons, and Freeman said the results “are becoming staples in both high-end and casual establishments.” As an example, Freeman points to the compressed cucumbers with beet cured salmon tartare at Bluestem Brasserie in San Francisco. 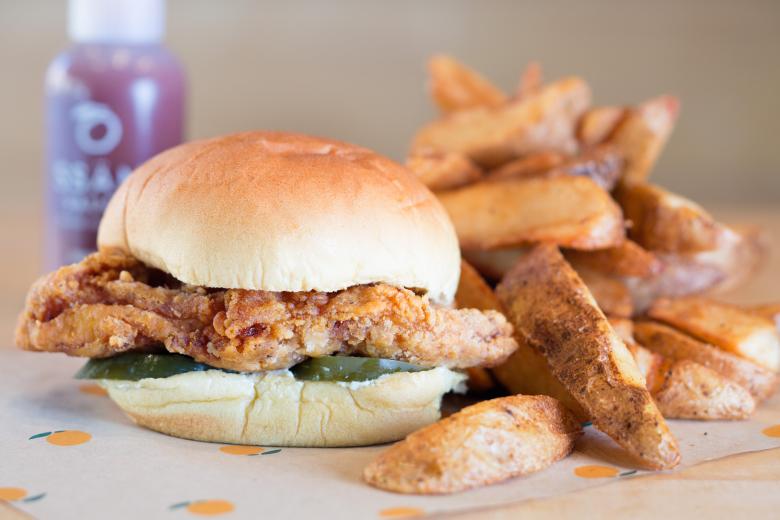 Next Up
Flavor of the Week: Pitaya, or Dragon Fruit by another name
Start Slideshow ›