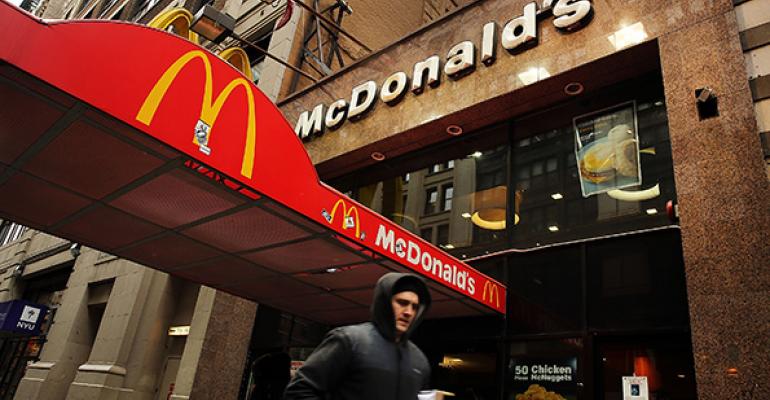 Investors put their faith — and money — in McDonald’s

McDonald’s Corp. stock rose on Friday, at one point hitting an all-time high of $133.88 per share.

McDonald’s has quietly been on a roll all year. Its stock is up more than 11 percent so far in 2017, enabling the Oak Brook, Ill.-based burger giant to hit a string of all-time highs. By comparison, the Dow Jones Industrial Average is up 3.5 percent.

It appears that investors are putting their faith in McDonald's before it reports earnings next week.

Analysts are clearly on board. According to MarketBeat, there are 17 Buy ratings on McDonald's stock, compared with 12 Hold ratings and only 1 Sell. But the consensus price target is somewhat lower than where it’s currently trading. Analysts say the stock should trade at about $131 per share.

Why the enthusiasm for McDonald’s? Analysts seem to believe the company will report good sales next week.

Instinet analyst Mark Kalinowski raised his same-store sales forecast for the U.S. to 0.8 percent — far above the 1.1-percent decline that analysts appear to be expecting.

“We believe that a focus on value and beverages, as well as the Big Mac line extension promotion, served McDonald’s well during a challenging time for the restaurant industry in general during Q1,” Kalinowski wrote.

A 0.8-percent increase might not seem all that thrilling, but McDonald’s is lapping strong comparisons with the first quarter of 2016, when same-store sales increased 5.4 percent. After a decline late in 2016, an increase in the first quarter would be viewed as a strong positive.

Meanwhile, BMO Capital Markets in a note initiated coverage on McDonald’s with a Buy rating, and suggesting that the stock could hit $153 per share.

Bernstein Research analyst Sara Senatore noted that 71 percent of McDonald’s managers said in a survey that new sizes of Big Macs sold ahead of plan. Earlier in the week, Senatore upgraded the company’s rating to Outperform.

Some of the enthusiasm from investors appears to be over McDonald's performance in Japan, which has been strong, even as it laps strong same-store sales from a year ago, as well as other markets. And there’s confidence in some of the chain’s domestic ideas, along with its focus on value with $1 drinks.

McDonald’s is expanding delivery across the country. And it's upgrading its mobile app with mobile order and pay, and plans to start serving fresh Quarter Pounders next year. The company also plans to expand its kiosk-based “Experience of the Future” concept to more locations.

While there are reports of some franchisee discontent — operators surveyed in the Kalinowski report were frequently critical of Experience of the Future, for instance — some analysts say the company’s efforts could fuel stronger sales in the coming quarters.