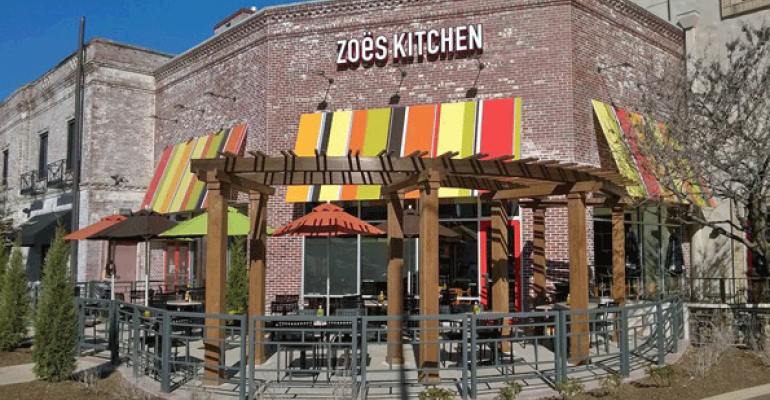 <p>Fast casual operator&nbsp;Zoe&rsquo;s Kitchen has had its share&nbsp;prices decline&nbsp;more than 40 percent since the August release of second-quarter earnings.</p>
Finance>Stock Data

Zoe’s Kitchen Inc. has the potential for long-term rewards when it nears 300 units in 2020, an analyst report said Monday, but the fast-casual operator faces some bumps in the short term.

Sharon Zackfia, an equity analyst at William Blair & Co., wrote in a research note Monday that the Plano, Texas-based operator had experienced a “downward drift” in stock price since reporting second-quarter earnings in June.

“While we understand that the specter of tougher upcoming comparisons is a challenging near-term roadblock for investors, we believe the long-term reward outweighs the near-term risk at Zoës,” Zackfia wrote.

“Moreover, we do not believe Zoës is encountering any concept-specific issues that jeopardize its growth potential, but rather has fallen prey to pervasively slower consumer spending patterns this spring and summer,” she wrote.

Zackfia said as Zoe’s Kitchen scales to more than 300 units in 2020, the company will show meaningful earnings acceleration.

But currently, with only $300,000 in pretax income equating to a penny in earnings per share, Zoe’s Kitchen’s model is “highly sensitive,” she said, with each percentage-point increase in same-store sales translating to about 3 cents in annual earnings per share increase.

“This sensitivity is obvious in our recent 30-percent haircut to our EPS estimates following second-quarter earnings, when we lowered our 2016 comp to 4 percent, from roughly 5.5 percent, and our EPS estimate to 10 cents from percent,” Zackfia said.

Zoe’s Kitchen share prices have declined more than 40 percent since the August release of second-quarter earnings, she added.

The variability of stock prices in 2017 will depend on same-store sales, she said.

Zackfia expects Zoe’s Kitchen to reach 360 locations by 2020, which she said should create “meaningful” leverage in general and administrative expenses.

The company’s report of same-store sales increases of 4 percent in the second quarter included a 3.1-percent increase in price and 0.9-percent growth in transactions and product mix.

Zoe’s Kitchen expects to open 35 to 36 restaurants before the end of the fiscal year, a slight increase from the 34 to 36 new units projected earlier.