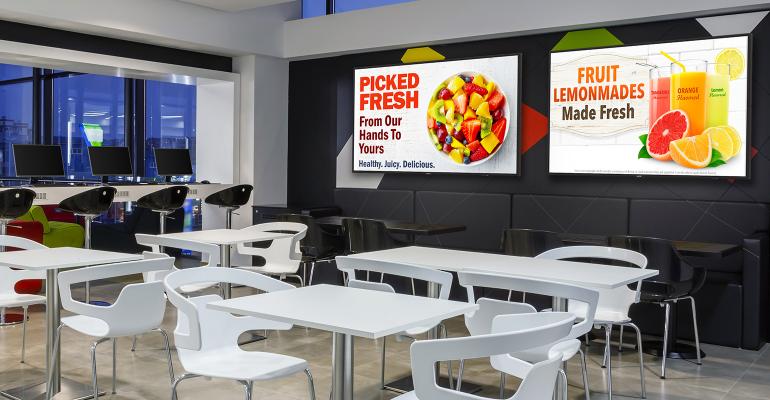 When being redundant is a plus

Digital signage can enable restaurant operators to engage with customers, keep people in the stores longer and generally boost sales — but only if the screens are on. While the graphics and the ability to update menu items can be impressive, a digital menu board that displays nothing can drive away hungry patrons. Dark screens signal the place is only barely open for business or that the establishment is somehow lacking.

That’s an image operators would like to avoid, so they make certain the screens are always able to display important messaging. One way to do this is to employ redundant media players or backup modules loaded with content that displays on the screens.

“When there is a failure, it’s not the monitor; it’s going to be the media player,” says Jason Shelton, national account manager, vertical sales-QSR/Retail, for NEC Display Solutions of America, Inc. “A redundant media player is a good way to make sure you don’t have dark screens.”

NEC is a leading designer and provider of such equipment as:

According to the company, the displays have an integrated media player that enables users to load content via USB or over the Ethernet connection, which the operators can use for simple signage integration. The P and V series have compatibility with Intel OPS, or open pluggable specification.

The secondary media player, called Raspberry Pi NEC Edition, can be inserted into the back of the monitor when the primary media player stops working in a digital display solution. The low-cost Raspberry Pi is a 16 GB compute module with an internal connection for:

Another important feature of NEC’s P and V series, Shelton says, is that the monitors are field serviceable. “You don’t have to take the monitor off the wall to service the media player,” he says. “Their accessibility is from the bottom. If the media player fails, you tilt the monitor forward and insert a new one.” NEC has a video on its website instructing the user in how to install the Raspberry Pi module.

The system also alerts the operator and NEC that the primary media player has stopped working, so that NEC can send someone to service the primary unit. The screens in the P and V series also have features such as slim design and an anti-glare surface that allows customers to read the screens even in bright, ambient light conditions.

Industrial grade components such as robust metal framework and back cover to protect the units make the monitors suitable for public spaces. Even though the monitors are turned on for many hours each day, there is still energy savings, as the backlight technology reduces power consumption.

As an additional form of redundancy, with the P and V series the operator can load the content files over the network the same way a PC user might send files to someone on a secure shared files account.

Having a redundant media player does more than make sure the graphics on the menu boards continue to highlight the day’s menu specials. When a media player stops working, it can affect the point of sale system. So while an establishment might be able to hand out paper menus when the screens stop working, that only solves the problem of how to tell customers which menu items are available. If the system is down, it is not tracking inventory and deleting menu items when ingredients are sold out.

There is also the issue of customer perception. Guests see dark screens and wonder what is going wrong at the restaurant. “From a branding standpoint, you might be able to get away with a poor performance once,” Shelton says. “But if that happens with consistency that is going to deter people from purchasing there, because people have so many choices now for where to eat.”

Redundant media players can give operators 24/7 reliability in their digital media solutions, and having a backup media player in the monitor can eliminate sources of failure for the operator.