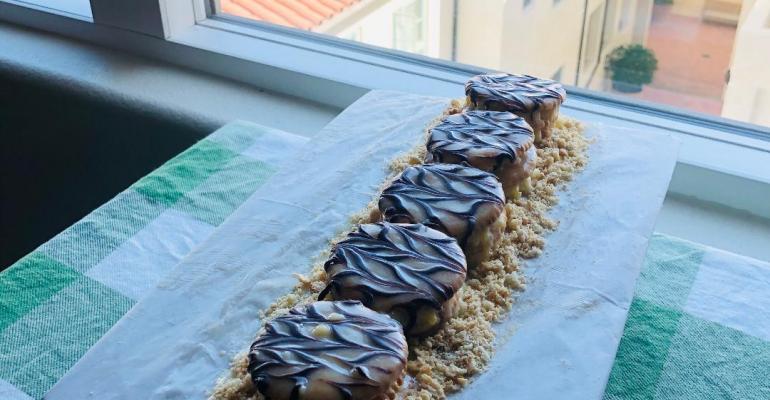 New this year, prize-winning recipe for culinary student is a twist on a mille-feuille.

Fernando Diala has always enjoyed RITZ crackers as a snack, but recently he took a baking and pastry class that inspired him to incorporate the crackers as a key ingredient in an elegant dessert.

“We had a lecture about mille-feuille or Napoleon,” says Diala, who is attending the Institute of Culinary Education in Pasadena, Calif. “The professor said the pastry itself is a biscuit, so I had an idea.”

Diala is the 2019 Grand Prize Winner of the RITZ Crushed Cracker Recipe Contest for the Culinary Student category. His RITZ mille-feuille recipe uses rich, buttery RITZ crackers as the biscuit layers between the vanilla pastry cream and raspberry jam layers. That saves substantial time and labor, as mille-feuille translates to “thousand leaves,” or the thousand layers or so in puff pastry. When made from scratch, puff pastry requires hours of rolling the dough, adding butter, refrigerating, and rolling the dough again.

It took Diala several tries to develop his mille-feuille recipe, which he started working on right after class. “I spent the rest of my evening doing trial and error,” he says.

Diala’s mille-feuille consists of three layers of RITZ crackers as pastry, two layers of raspberry jam and vanilla pastry cream, and a melted white chocolate and semisweet chocolate topping. Tempering the chocolate — or slowly heating, cooling, and stirring it — was the real challenge. “I had to give it the correct timing,” he says. “Otherwise, the biscuit melts.”

He presented a sample of his mille-feuille to his aunt and asked for feedback. “My aunt is very honest,” he says. “I’ve made a lot of cakes for her and she always gives me constructive criticism.” She liked the mille-feuille because it was not too sweet and contained the right amount of filling. Diala continued his research by giving a sample to his brother, who also gave the dessert high marks.

Diala also entered a second recipe for Ritz Mini Tart/Tartlet, which features RITZ crushed crackers, fresh strawberries and blackberries, and a filling of vanilla pastry cream and raspberry jam. He knew the RITZ mille-feuille had a better chance of winning, because the use of crackers as puff pastry showed originality.

Before enrolling in the Institute of Culinary Education in the School of Pastry and Bakery Arts program, Diala worked as an accountant for 15 years, mostly in his native Manila, Philippines, as well as two years in Melbourne, Australia. He decided to take time off to move to the U.S. to join his brother, who lives in Los Angeles, and to pursue a passion in baking and pastry.

Diala says U.S. consumers have different expectations than diners in other countries. “In the United States people like to eat out a lot, and they know a lot about cakes and pastries,” he says. “Our professors are teaching us that we have to be very good with what we’re doing, and always serve the best we can.”

Diala began the 12-month program in July of this year. In March 2020 he will begin an externship in a professional kitchen, and graduation is scheduled for June 2020. “I started the program itself, so I decided to do it professionally,” he says. “I think it’s important not just to have experience, but also to have a diploma.”

Diala hopes to someday open a restaurant with his brother. “I think I want to give it a go, to pursue this industry,” he says. “Maybe I can combine my accounting background and my culinary skills.”