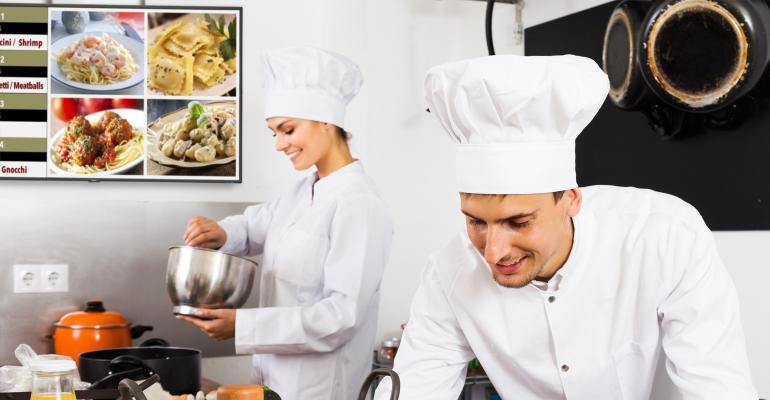 Digital displays can do more than let customers know what is on the menu. The technology also can be an essential part of back-of-the-house operations where chefs, prep cooks and other staff use the screens to stay organized during busy periods.

For years the kitchen staff fulfilled orders written on paper tickets and posted on a rack or spindle. Even the establishments that had incorporated point-of-sale systems would still have paper tickets that would print and get smeared with grease or lost in a shuffle of orders. Worse, staff would have to yell to each other to start an order or to update each other on the status of tickets.

These days the back-of-the-house is a more high-tech, quieter workplace. It’s also a more environmentally friendly area, as the paper tickets are gone in many establishments. That’s especially true in quick-service operations where each prep station has a display screen which posts a ticket as soon as the front-of-the-house takes the order.

Instead of shouting or shuffling paper tickets, workers now rely on their screens. “You have multiple people in multiple areas, so they have a display directly where they are instead of having to look down the line,” says Kevin Christopherson, director of product marketing for NEC Display Solutions of America. “They can see which order needs to be taken care of.”

The kitchen staffer views the order on the screen, assembles the menu item and then moves the food to the next station. Since these are informational, not interactive screens, the worker does not have to tap the screen to move to the next order. “Typically, in the prep area, it’s not going to be a touch screen,” Christopherson says. “[Workers] are not touching food, then touching the screen, then going back to touching the food.” At the end of the assembly, the employee who packages the food presses a button to clear the order.

The technology can help speed up throughput, too. Timers in the system help managers to see where bottlenecks might be occurring. If orders are taking longer to fill during peak mealtimes, for example, the system can show the timing on each step of the food prep so management can reroute the assembly line or add staff to that station.

Christopherson says the key to success with a back-of-the-house display system is to buy the right screens. These are not the consumer-grade screens that can be purchased at a big box store, he says, but commercial-grade screens that can withstand the challenging kitchen environment. They are small enough so they are not in the way of kitchen operations, but large enough for the staff to read the orders. The screens measure from 17 inches to 24 inches, and are usually mounted above the prep areas so workers look up to read the orders.

This setup creates another challenge: The ambient temperature in the kitchen is hot, and hot air rises. “You need a display that is ideal for these types of environments,” he says. “Our screens are more robust, more industrial and are going to perform well in a warm environment.” He adds that NEC screens have holes in the back for ventilation.

Other damaging factors include grease, grime and general wear and tear on the screens and the supporting structure. “You need to make sure that the mounting points on the displays are actually going into a metal chassis, not into just plastic,” he says. “In time plastic degrades, and that unit will eventually fall on somebody.”

Larger chains prevent problems by conducting in-depth life cycle testing before installing the screen in multiple locations. “They have a lab or pilot store where they’re going to put [the screens] in,” he says. “They simulate the different factors the screen might encounter, and you have to pass those tests in order to be deployed.”

He adds that the units have to be durable because quick-service operators generally do not have an IT expert on staff who can repair something quickly. NEC provides a three-year warranty, which Christopherson says is longer than what a user would get from retail electronics stores.

“We work with all the major restaurants,” he says. “We have strong relationships; we know what their needs are and we’re there to back up the product should they have any issues.”

NEC screens are also environmentally friendly. Not only does having a back-of-the-house system save paper by not printing tickets, but the screens also have ECO Mode to set the brightness variable from zero to 80 percent, thereby saving power and reducing the operator’s energy costs. There is also a carbon footprint meter which helps track and calculate the reduction of green gas emissions.

“Digital displays in the prep areas in a QSR environment foster a quicker, more efficient and more accurate work environment,” Christopherson says. “Workers know exactly what needs to be made in a timely manner without sorting through slips of paper.”