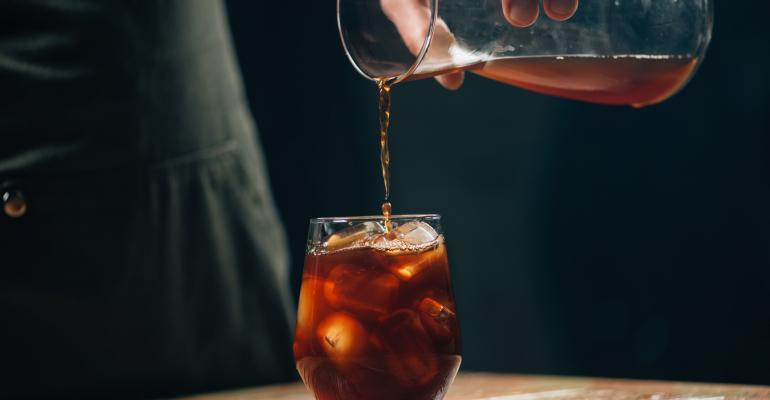 Profitable beverages in the afternoon

More consumers today say that meaningful, unique and experiential beverage offerings are serving as destination drivers in deciding which restaurants to patronize, according to Technomic’s 2018 Beverage Consumer Trend Report.

Beverages, including a line of frozen slushies and sweet tea, have been a key part of the afternoon sales strategy for Checkers & Rally’s restaurants, says Terri Snyder, chief marketing officer for the Tampa, Fla.-based fast-food chain. Sales between 2 and 5 p.m. now account for 23 percent of sales, up from 4.5 percent eight years ago.

“As operators, we want all business to come at lunch and dinner, and be really focused on those hours. But that is not how consumers live their lives today,” she says.

Part of growing afternoon sales with beverages is to understand the needs of the consumer, Snyder says. Some customers are looking for refreshment; others may feel the need for a treat, or to be comforted. Some are just looking for a caffeine kick.

One of Checkers & Rally’s best sellers has been Kool-Aid slushies of tropical punch and blue raspberry flavors.  This summer, the burger chain added a new line called Island Slushies, starting with a Peach Mango and Caribbean Colada flavors. The drinks now account for 3 percent to 5 percent of sales.

“Their margin is amazing,” Snyder says. “Slushies are really important as a growth drivers for our business.”

Even with a name like Lemonade, the fast casual chain has added new beverage products to attract customers, including those looking for an afternoon refreshment, says Kelly Hansen, vice president of marketing and sales for El Segundo-, Calif.-based company.

“We realized in our locations with high traffic there was an opportunity to increase sales and drive more traffic inside the stores with a broader offering of beverages,” Hansen says.

Lemonade launched a beverage menu earlier this year that includes its Skinny Lemonade T, which contains one-third less sugar than the chain’s classic cold-pressed lemonades. The T’s are a mix of lemonade and flower teas, including blue butterfly flower and red hibiscus. Other new offerings are:

Both smoothies and frozen drinks come with the option of adding blueberry boba and thereby tapping into a Taiwanese tea trend that is growing in popularity in the United States.

Boba, or pearl tea — also known as bubble tea — has grown 32 percent on U.S. menus in just the past year, according to Datassential MenuTrends. This tea is predicted to grow another 26 percent over the next four years.

Bubble tea is made with ice, a type of tea — often black tea — milk and usually tapioca pearls, which are derived from cassava root and possess a chewy texture like gummy candies. Other popular drink ingredients include green matcha, which has grown 39 percent, according to the MenuTrends report. Golden turmeric has expanded to 46 percent of menus.

All varieties of alternative milks also are growing in menu penetration, including coconut milk, which is on 7 percent of menus, and oat milk, which 54 percent of Generation Z and millennial customers say they would be likely to try it at a restaurant.

Datassential’s Plant-Based Eating Keynote Report notes that plant-based dairy substitutes are gaining in popularity, driven by coffee add-ins like soymilk or items such as yogurt made from coconut milk.

Alternative dairy milks made from cashews, soy, coconut and almond reportedly are selling twice as fast as the market average.

When expanding offerings and adding differently made beverages, keep the process easy to use, operationally, says Snyder from Checkers & Rally’s. The chain is rolling out a brand of slushie machines systemwide that use a bag-in-the-box flavor and has an ice container.

“Literally you just a push a button and the slushie is made for you,” she says. “It has to be simple and easy. You are not staffed in the afternoons like you are for peak periods. Make this as operationally simple as possible.”

For operational ease in preparing drinks, whether from slushies to teas, indulgent to sugar-free, DaVinci Gourmet syrups can add flavorful yet simple twists that make afternoon drinks on-trend and profitable for your business.