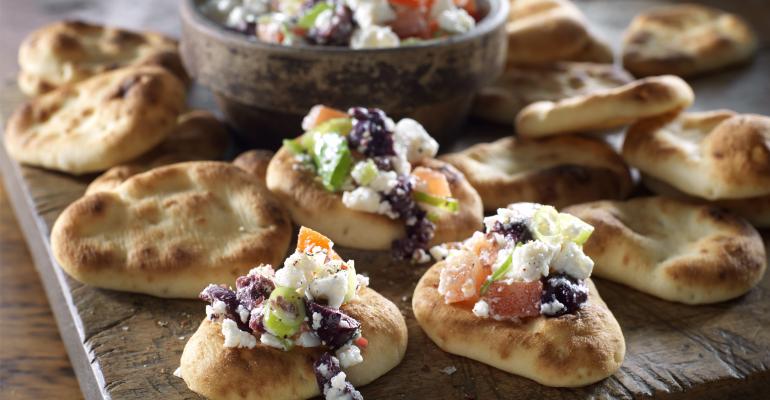 Naan is a superior bread for small bites

The versatile flatbread is appearing on more appetizer menus.

Bread has long been a pre-entrée staple, served simply in a basket, to the more elaborate crostini or bruschetta, to dips and cheeses with baguettes or other sliced breads. As consumers look for more innovative, global foods, chefs are incorporating these different flavors and textures into small plates, appetizers and shared dishes.

Naan, the hand-stretched Indian flatbread traditionally baked in a tandoor oven, is gaining popularity on these menus.

Tapping the food trends
Naan is adaptable and delicious as a flatbread, says Ron DeSantis, president of CulinaryNXT, and several factors are contributing to its growing popularity.

“Sharing, portability and texture are key food trends right now and naan has all three attributes,” DeSantis says. “When used as a flatbread, naan can be cut up and placed in front of a group of diners to share. Sharing creates a friendly, communal atmosphere at the table.”

Also, he says, naan’s portability allows diners to eat on the go. Naan can be filled with other ingredients for a portable snack, as the structure of the dough makes it durable.

“Texture seems to be very high on the desirability scale right now,” DeSantis says. “Naan can be baked light, soft and fluffy and it’s delicious. It can also be grilled crispy and charred, which gives it a robust taste. Or naan works when baked crispy. All in all, it’s a great food that is versatile and adaptable.”

Much more than chips and dip
One appetizer trend that is contributing to naan's popularity is the rise of hummus and its various new iterations. At BRU Burger Bar and Stone Creek Dining Company, two restaurants in the Indianapolis-based Cunningham Restaurant Group, one popular appetizer is Triple Dip, which features whipped goat cheese with peppadew pepper jam, edamame hummus with pine nuts, guacamole, onion straws and grilled naan. At another group restaurant, Tavern at the Point, the Black Bean Appetizer is also served with naan.

Carissa Newton, director of marketing for Cunningham Restaurant Group, says these appetizers are very popular. “They hit the spot because they are light and often are served with creative dips and condiments that make it something that appeals to many,” she says. “Naan is an excellent choice because it can be served sliced or quartered and holds up to any type of dip that might be served with it. I also think the taste contributes to the popularity of the dishes.”

At Level, A Small Plates Lounge in Annapolis, Md., the Chorizo Dip is one of the top sellers and a customer favorite. “We lightly drizzle the naan with olive oil and season with salt and pepper,” says Eric N. Sowers, proprietor. “Then it goes onto the chargrill in order to give it that nice, toasty flavor and then serve it hot with a creamy house recipe chorizo dip.”

Level also serves Roasted Pepper Hummus with chili oil, fire-roasted onion, peppers, eggplant and tandoori naan. Sowers says naan is the right choice for dips. “Crackers or chips are just too dry and offer a textural distraction for the guest eating this creamy dip,” he says. “The naan offers a much better, enjoyable, soft-textured option that complements the dip.”

Few operators have the tandoor oven or the time or skills to make delicious, pillowy naan, so they look to the expertise of Stonefire® Authentic Flatbreads, which makes authentic Naan, Naan Dippers® and other high-quality authentic flatbreads in a patented tandoor tunnel oven.

Grab a share
Another trend that contributes to naan’s popularity is shared foods. “Fifty percent of our clientele don’t order appetizers for themselves anymore,” says Ashfer Biju, executive chef at Perrine NYC, which is in The Pierre, A Taj Hotel. “You have four people sitting at a table, and they order a salad and three or four appetizers, and none are for an individual.”

One of the bestselling menu items is Crab Imperial Flatbread, with house-made naan, jalapeños, herbs and Gruyère cheese. Crab Imperial is an old-style American dish made with crab, mayonnaise and other ingredients and baked in a gratin dish. “We took the mayo out,” Biju says. “We prepare it with crème fraîche.”

Perrine, which has its own tandoor in the kitchen, also offers Tandoori Chicken Flatbread, with house-made naan, capers, chilies and Parmesan. Biju changes the flatbread menu seasonally and will offer a Zucchini Blossom Flatbread in summer and a Squash Flatbread in the fall. The Crab Imperial Flatbread stays year-round. “Because of its popularity we never get to take it off the menu,” he says.

The flatbread is tavern cut, which means squares on a grid, instead of being served pizza-wedge style. That makes it easier to share. “These are two-bite pieces,” Biju says. “Nobody uses a fork and knife anymore. They pick up the naan from the edge.”

Whether it’s for an update on dip appetizers or for fun, shareable plates, naan provides a must-have, delicious base for many on-trend foods.