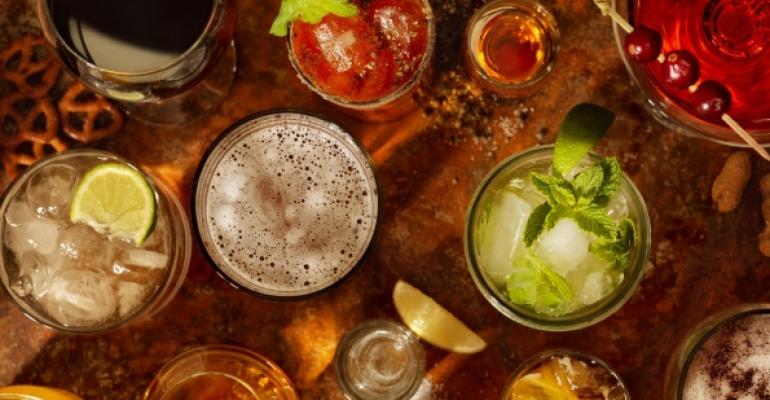 Savvy operators know the right kind of ice is integral to the success of their cocktail programs. Sponsored by Hoshizaki

Restaurant operators have always relied on ice in abundance to chill beverages. Now, an increasing number of them are appreciating the quality as well as the quantity.

Ice is cool today. That’s true whether you are talking about a neat stack of square, crystal clear cubes in a Collins, an oversized chunk gracing a shot of single barrel bourbon or the pellet ice sparkling like pearls in a tiki drink. The purity, coldness, clarity and melt rate of the cubes are all key factors in a cocktail’s quality.

“Ice is to a bartender what fire is to a chef,” declares Julian Cox, beverage director of Lettuce Entertain You Enterprises, the Chicago-based multi-concept restaurant group. Just as no chef could create a great meal on a bunsen burner, no bartender can produce great drinks with ice that is soft, watery or off-tasting, Cox says.

Today’s popular specialty cocktails tend to be stirred, shaken and presented with ice equal in quality to the artisan spirits, fresh juices, house-made bitters and fancy glassware in use. The frozen stuff appears in many shapes and sizes — cubes, crescents, crushed, pellets and unique hand carved and  custom frozen shapes.

Ice plays an active role in how drinks taste as well as how they look. At Three Dots and a Dash, Lettuce Entertain You’s tropical tiki bar in Chicago, the chilling and controlled dilution of machine-made pellet ice contributes to a balanced, refreshing and complex flavor profile in flamboyant tiki cocktails mixed with fresh fruit juices and high-proof rums. “That balance is really important in classic cocktails like the Fix, the Smash and the Julep, and tiki drinks in general,” Cox says.

Cool ice is a hallmark of the trendy libations that are big moneymakers in restaurants. “Cocktails contribute to a tremendous amount of profitability, better than beer and wine,” says Aaron Allen, an Orlando, Florida-based restaurant consultant. In addition, distinctive cocktails differentiate dining concepts and create social media buzz when guests share pictures of flashy drinks on Instagram, Vine and Pinterest, Allen notes.

All of that is widely appreciated among culinary professionals. Bar products such as craft/artisan spirits, onsite barrel-aged drinks and culinary cocktails made with savory ingredients earned “hot trend” status from 70 percent or more of the professional chefs surveyed in the National Restaurant Association’s What’s Hot 2016 Culinary Forecast.

Ice cubes that are hard, free of bubbles and cloudiness and untainted by off tastes are the standard for mixology today. A scoop of square, standard cubes dropped into a mixing tin provides the rapid chilling and controlled dilution essential for shaken drinks that combine spirits with juices, eggs or dairy. Such ice is also fine for stirring all-spirits drinks.

“You always want some dilution in a cocktail,” says Benjamin Schiller, operational partner and beverage director of The Fifty/50 restaurant group based in Chicago. “The nature of the cocktail is going to dictate the ice you use.” A spirits-driven cocktail like a Manhattan, stirred over ice and strained into a glass with a single large cube, can be sipped slowly for a spell without much dilution. In contrast, smaller forms of ice, which have greater surface area and melt more quickly, are desirable for a drink that is lighter, more refreshing and consumed more quickly.

At The Sixth, The Fifty/50’s upscale cocktail bar, Schiller presides over an elaborate house ice program. A commercial freezer made for ice sculptors produces 300-pound blocks of hard, clear ice. The blocks are lifted with an engine hoist, carried to a bandsaw and cut into a variety of shapes, including two-by-twos for spirits pours and a long, rectangular cube for tall Collins glasses.

Bottlefork has a few ice tricks of its own. Take the Bill Brasky, a cocktail-for-two priced at $35, chilled by a 5-inch by 5-inch ice cube with a vintage playing card frozen inside. For St. Patrick’s Day, Bottlefork had its ice vendor freeze a mini-bottle of Irish whiskey inside that jumbo cube. “When it melted, you got the coldest whiskey shot ever,” Kamin says.

Take crescent cubes, for example. They nestle in the glass and displace liquid better than grid cell ice, giving a cocktail a greater volume display and a higher profit. They also last longer in the ice bin after production, thus saving utility costs. In contrast, grid cell ice stored in a bin melts 18 percent faster than crescent cubes over a 24-hour period. Finally, the smooth, round surface of the crescent cubes permits less splashing when pricey spirits are poured, a vital cost saver at the bar.