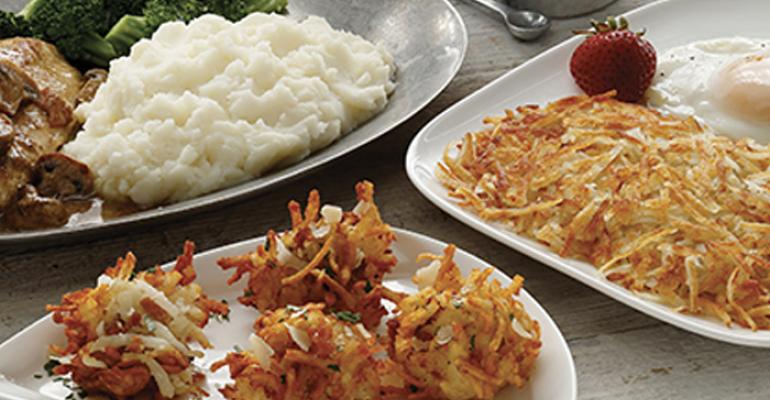 Convenience potato products are loved by all, unmatched for versatility and always low cost.

What’s the most versatile ingredient in foodservice? The humble potato. It goes with just about everything because it’s endlessly malleable. It tastes incredible whether griddle-browned or made into savory pancakes at breakfast; French fried, roasted or turned into a soup at lunch; or baked, mashed, scalloped, turned into gnocchi, or served as dauphinois at dinner.

“That they’re affordable, approachable and familiar makes potatoes an important part of a menu,” Tristano says. Potatoes offer endless opportunities for innovation, he adds, and consumers can’t get enough of them. “Potato skins, poutine, potato pizza, potato arepas, spicy African potato cakes — we could go on all day.”

Endless opportunities
David Macfarlane, corporate executive chef for Idahoan Foods, says chefs are now realizing the many flavor benefits of fresh-dried and value-added potatoes. Their production is vastly advanced compared to days past when final texture and flavor differed greatly from scratch. Not only are Idahoan fresh-dried products on par with scratch, but also their high yield and ease of preparation have made them a key selling point and an inspiration for creativity.

In his cross-country travels, Macfarlane has seen Idahoan mashed potatoes used in multiple foodservice segments. In fine dining, he’s seen them upscaled with truffles, and in casual dining as a potato cake atop a burger. Idahoan’s Tater Tumblers® appetizer mix, he adds, is an amazingly versatile shredded product which allows chefs total customization.

“Our Tater Tumblers® appetizer mix was created to give chefs the freedom to incorporate their own flavors and artistry to make the product their own,” he says. “If yours is a Southwest-type restaurant and all you have to do is add Hatch chiles to make it your own, that’s easy innovation.”

He says Tater Tumblers® appetizer mix is exceptionally useful for making customized tater appetizers and hash browns, both of which are now menu mainstays at many restaurants.

“Tater appetizers are everywhere now, but their only problem is they’re whole; you can’t change them at all,” says Macfarlane. By using Idahoan’s Tater Tumblers® appetizer mix, chefs can add their own signature flavors to their tater appetizers. “I’ve seen chefs add burnt brisket ends to their tater dishes and crab pieces to make a twist on crab cakes. Bacon and cheese are great adds, too.

“A breakfast chain we work with is using our Tater Tumblers® appetizer mix as a (hash brown) base for eggs Benedict in place of the traditional English muffin.”

Labor savior
In a market where labor is tight and pricey, potatoes do present the challenge of preparing them from a raw state, which takes time. Fortunately, fresh-dried, frozen and refrigerated potato products save labor and increase yield and consistency.

“I’m like so many chefs who grew up in kitchens spending hours peeling and cooking potatoes,” says Macfarlane, a Scotland native whose résumé includes work as a White House chef in Washington, D.C., over two presidential terms.

Macfarlane says chefs commonly overlook the nutritional benefits of potatoes, which are high in potassium and naturally gluten-free. The trend toward gluten-free eating (in addition to vegan and vegetarian dieting) continues to gain momentum, he says, and that’s led him to innovate in other ways.

“We created a gluten-free potato crumb which outperforms bread crumbs by far,” he says. “Just think of how chips stay crispy; you get that with a potato crumb.”

Tristano points to potato innovation occurring passively as ethnic dishes from around the globe creep onto U.S. restaurant menus. European chefs have elevated potatoes to edible art, while dishes from Africa and South America employ potatoes as the base for rustic roasted meat-centric dishes.

Tristano groups potatoes “among the top three most versatile ingredients in the world, if not most versatile,” and adds that “when something’s that good and inexpensive, how do you not put it on your menu?”