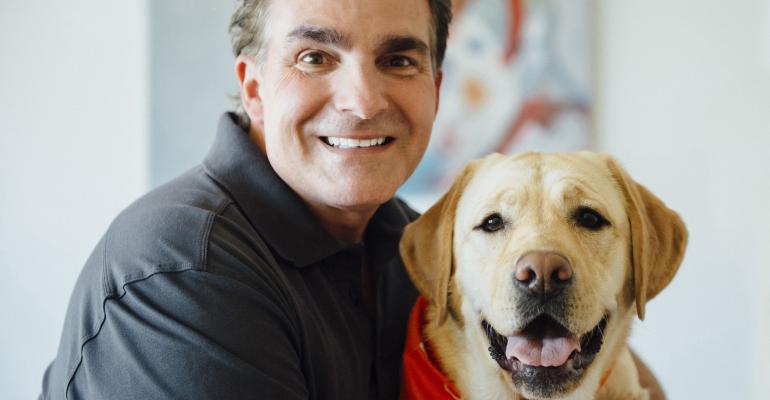 Going to the dogs

Restaurant operators looking to diversify their portfolio may find the pet industry a worthwhile option.

Despite running a restaurant and wine bar in northern Michigan, Mark Wayne decided that opening a Dogtopia franchise made perfect sense for his lifestyle and investment.

“In Dogtopia, I found a strong business model in a market that is growing rapidly,” says Wayne, who now routinely drives from his restaurant in Elk Rapids to the Detroit suburbs where he operates three Dogtopia locations.

The hip, bright and spacious Dogtopia facilities cater to dozens of dogs everyday. Similar to children’s daycare, pet owners drop off their dogs in the morning and pick them up in the evening. Dogtopia locations also offer overnight boarding and spa services for dogs.

Restaurant operators looking to diversify their portfolio with a simpler proven model will find a great opportunity with Dogtopia.

“As I researched the dog industry, I became more and more intrigued,” Wayne says.

The $63 billion pet industry is projected to reach $90 billion by 2025. Nearly 55 million households in the United States have at least one dog and there are over 75 million dogs in the US according to the American Pet Products Association. Baby boomers who are becoming empty nesters are spending more on pets while millennials are delaying having children and replacing kids with a dog.

“Investing in a Dogtopia provides an opportunity to get in early on an exploding market segment,” says Alex Samios, former 34-unit Papa John’s franchisee who’s now overseeing the growth for Dogtopia. Dogtopia operates 44 locations today, has more than 70 in development and is expanding rapidly with plans to reach 400 stores in the next five years.

A new management team led by President and CEO Neil Gill, who also has 35 years of experience in the restaurant industry, is focused on expansion and attracting multi-concept franchise operators who know how to duplicate a system.

“The best franchise operators out there are restaurant operators,” Samios says. “They are hands on and know that customer engagement and satisfaction is key. They are used to managing complex operations, but when they look at Dogtopia, they will appreciate the simplicity.”

Wayne says the experience of running a restaurant prepared him for the pet care industry.

“At Dogtopia, it’s easier to build a strong relationship with customers because they frequent the establishment more often – daily if not several times a week, Wayne says. “And while rain or snow might keep customers away from a restaurant, dog owners are more likely to bring their dogs into Dogtopia during inclement weather so their pets can get exercise in a warm and dry environment.”

“That customer consistency helps keep labor costs steady, employees have more regular hours, and there is no need to send people home or call more workers in to meet sudden peaks in business,” Wayne says.

“The labor is very consistent,” he says. “Whether you have 20 dogs or 60 dogs, you need 'X' number of people for 'X' shifts. That rarely changes versus the way it is in the restaurant business.”

And while labor costs are consistent, food costs, one of the volatile expenses of a restaurant, is nonexistent at Dogtopia. Cost of goods is only 4 percent.

Before signing up with Dogtopia, Wayne asked a mentor who is a former Burger King franchisee and now owns Applebee’s restaurants to take a hard look at the dog daycare concept’s business model.

“A point he made is that the model is similar to restaurants from rent and from labor costs, but not the food costs,” Wayne says. “One of the biggest problems with restaurants is the food cost — they are commodities and out of franchisees’ hands. They move up and down, no matter how well you are doing. Dog daycare eliminates the food cost issue and associated issues, like shrinkage, waste and spoilage.”

Besides the food cost issue, the majority of Dogtopia’s business is Monday through Friday with limited nights and weekends – a welcome reprieve from the grind of the restaurant industry.

“While most restaurants serve a commodity, Dogtopia offers a unique service that’s in demand and people are passionate about,” Samios says.

“Our franchisees get paid to play with dogs all day and that’s pretty damn cool,” he says. “It’s a fun industry and people actually like working for you. If you are going to pay someone $10 an hour with a choice to work in a restaurant or to play with dogs, which one do you think they will choose?”