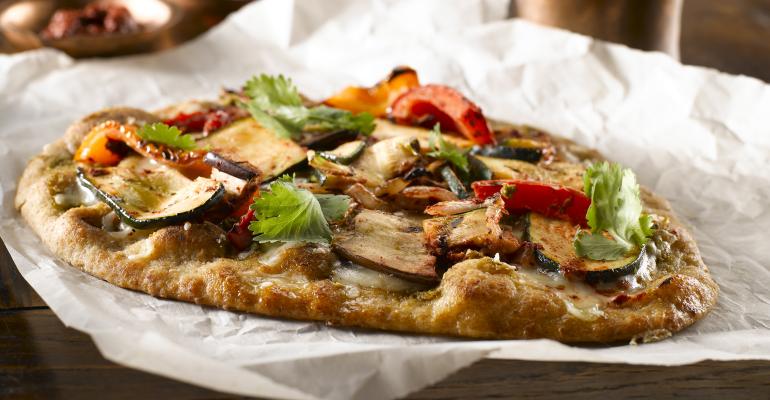 Consumers continue to expand their palates through the exploration of ethnic flavors and cuisines. In fact, 36 percent of consumers order ethnic foods or foods with ethnic flavors at least weekly according to Technomic. Menu mash-ups have become very popular as a result, and naan and other flatbreads are playing a big role.

If one global flavor is good, two are better. American consumers have long enjoyed the flavors of exotic regions, but many are discovering that combining flavors can result in even better-tasting foods. So instead of deciding whether to order foods inspired by the cuisine of a single country, adventurous diners are seeking innovative combinations. For restaurants, combining ethnic flavors with familiar ones is a great way to bring excitement to a menu while remaining approachable. That includes everything from small plates to pizzas to sandwiches with more than one flavor profile.

Bread is a key ingredient in many of these menu mash-ups, and often it’s a flatbread such as naan. According to research firm Datassential, naan — which is a soft Indian flatbread traditionally baked in a tandoor oven — appears on 2.9 percent of menus, reflecting an increase of 23 percent over the past four years. Soft and fluffy with a chewy bite and perfectly charred flavor, naan is a neutral flatbread which incorporates well into any cuisine.

“We have seen amazing growth in our naan and flatbread categories,” says Jim Gibson, VP at Stonefire® Authentic Flatbreads. “Chefs are using our naan across multiple menu items, from appetizers to dessert, and naan is the perfect table bread.”

One way to blend global flavors is to start with naan and then add familiar ingredients that already have wide appeal. At Bindaas in Washington D.C., one of the most popular menu items is the Bacon Cheese Chili Naan. “Bacon is pretty popular all over America,” says executive chef Vikram Sunderam. “Everybody loves it, so we thought we should do something with bacon.”

The small plate has been well received over the two years Bindaas has been open, and is among a number of naan selections that include Spinach Paneer, Garlic Cilantro and Olive Oil. “We always like to take on traditional dishes and make something different,” Sunderam says. “It has to work too. If it doesn’t taste good or look good, there’s no point in going that direction.”

Global foods are gaining at breakfast too. According to the National Restaurant Association’s 2019 What’s Hot Culinary Forecast, globally inspired breakfast dishes ranked fourth among top trends. At Pondicheri, which has locations in New York and Houston, the Masala Pie on the breakfast menu features cheese and egg on a naan crust, and is available with goat, pork or chicken. “The breakfast pie is very tasty,” says Anita Jaisinghani, chef and owner. “I have always liked pot pies.”

Jaisinghani adds that the pie is a good alternative to sugary breakfast cereals and to overly large breakfast platters. “I don’t think breakfast should be heavy,” she says. “It should be nutritious.”

“I used to make naan sandwiches for my kids,” Jaisinghani says. “It was their favorite lunch.”

Flatbreads are also gaining popularity as operators devise iterations that reflect other cuisines. At Dust Bowl Brewing in Turlock, Calif., for example, the flatbread selection includes:

Whether it’s Indian food with a few American ingredients, or South American items with naan bread, global amalgamations are on-trend now. Consumers are looking for new combinations of their favorite items and new flavors, and flatbreads such as naan can bring the meal together.

For more information on Stonefire® naan and flatbread, visit https://foodservice.stonefire.com/inspiration/.