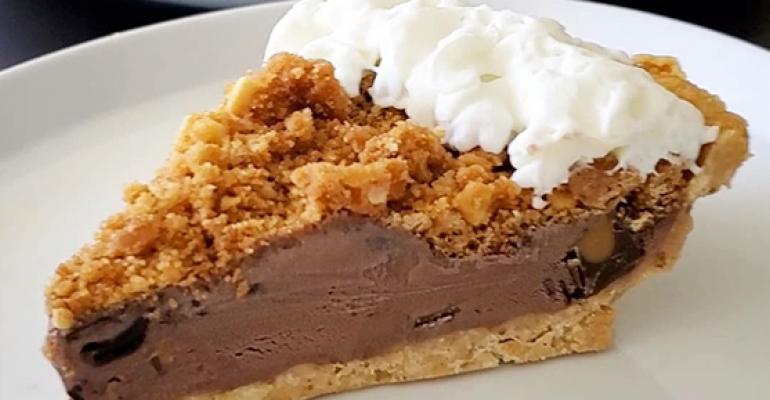 One way to make dessert even more crave-worthy is to combine flavors. Instead of a simple chocolate ice cream pie, why not combine sweet and savory to offer a delicious treat? That was the idea behind the Fudgy Peanut Butter and Chocolate Truffle Ice Cream Pie made with RITZ Crackers, the Grand Prize Winner of the 2020 RITZ Crushed Crackers Recipe Contest, Culinary Professional.

“I had the idea for the pie in the back of my mind, but I had never made it,” says Eric Stein, chef, international research and development for Church’s Chicken/Texas Chicken in Atlanta. “When I saw the recipe contest, I just ran with it.”

As an R&D chef, Stein is always looking for new recipe ideas. One day he found a recipe online for Texas Flood Pie, a variation of Mississippi Mud Pie that features a creamy chocolate filling and a salty cracker crust instead of a chocolate crust. Stein has always enjoyed RITZ Crackers as a snack because they go well with savory ingredients such as meats and cheeses, and with sweet ingredients such as chocolate and ice cream. He decided to incorporate RITZ Crushed Crackers in a new iteration of the pie. “I modified that recipe and made it my own,” he says.

For the ice cream middle layer, Stein opts for Double Chocolate Truffle, but strawberry works well too. “I think the possibilities are endless,” he says. “As long as you have sweet, salty and peanut butter you can use your favorite ice cream.” The top crumble is similar to the bottom layer but contains brown sugar instead of confectioners’ sugar. The combination contains not just sweet and salty flavors but also crunchy and creamy textures.

Stein earned his bachelor’s degree in Culinary Nutrition from Johnson & Wales University in Providence, Rhode Island, and a master’s degree in nutrition education from Eastern Illinois University in Charleston, Illinois. Before joining Church’s Chicken/Texas Chicken last year, he had worked for Buffalo Wild Wings, and before that developed chicken breading flavors for the ingredients supplier Newly Weds Foods. In a previous culinary competition, he won the runner-up prize in a duck recipe contest. So while poultry seems to be in his DNA, he wanted to make a decadent, fun dessert for the RITZ Crushed Crackers Recipe contest.

The recipes were judged on creativity, methodology and use of RITZ Crushed Crackers as an ingredient. The contest was sponsored by Nation’s Restaurant News, Food Management, Restaurant Hospitality and Mondelēz International Foodservice.