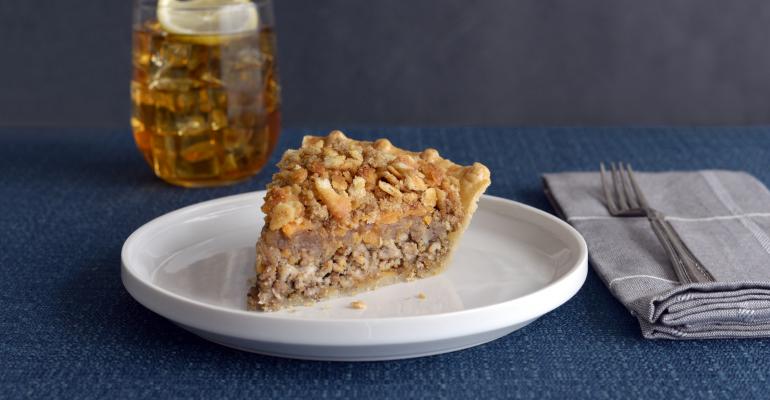 “There was a recipe for mock apple pie,” says Dalton, the Grand Prize Winner of the 2019 RITZ Crushed Crackers Recipe contest, in the Culinary Professional category. “It’s really good. It’s kind of a classic. People know about it, and don’t know about it.”

Dalton’s recipe for Pork-U-Pie, a savory and sweet pork and Cheddar mock apple pie with crisp and buttery RITZ crumb topping, was inspired by that vintage recipe. The mock apple pie traces its heritage to the Great Depression, when certain foods were difficult to get, and people had to show creativity in their cooking and baking. The crushed, buttery RITZ crackers served as a key ingredient in the filling, taking the place of apples. The pie also contained sugar, cinnamon, and cream of tartar and other flavors which hinted at apple.

The PorkOU-Pie starts with a flaky pie shell. The layers are Cheddar cheese, pork, the mock apple RITZ crushed cracker mixture, more Cheddar, and a crumb topping made with crushed RITZ crackers, brown sugar, butter, and cinnamon. The combination of sweet and savory is always popular, and the recipe is also a nod to another nostalgic food — pork chops and apple sauce.

“Pork goes with apples really well,” Dalton says. “Also there’s Cheddar and apple pie. That’s how I came up with the key ingredients.” She adds that in Mexico pork is more popular than beef, and has a big presence on the menu at Texican. The restaurant is open for breakfast and lunch, and the menu features innovative versions of popular Texan and Mexican foods.

“As a chef you have to be open-minded,” she says. “I have to put myself in someone else’s shoes, and think about what people want to eat.”

Some of the best sellers at Texican are its Austin-style breakfast tacos with chorizo, potato, scrambled egg, queso fresco, cilantro, and onion. At lunch, the Texas Red Chili is popular, as is the King Ranch Casserole, a baked chicken enchilada topped with avocado crema and pico de gallo. Before opening Texican in spring of 2017, Dalton owned and operated a breakfast restaurant called Dodo.

Even though her background is in breakfast, Dalton wanted to enter a dessert in the RITZ Crushed Crackers Recipe Contest because she has always enjoyed baking. Growing up, she and her sister would help their mother in the kitchen, and baking was the most fun.

Dalton has worked in various roles in the hospitality industry in hotels and high-end restaurants. She and a business partner opened their first restaurant without formal culinary training, and after the 2-year lease ended on that property, she went into business for herself.

The winner of the recipe contest receives $3,000 and a year’s supply of RITZ crushed crackers. Dalton says she is eager to experiment with the crackers and devise more recipes. “You learn from your mistakes,” she says. “Good cooking is about patience.”