/sites/all/themes/penton_subtheme_nrn/images/logos/footer.png
Recent
Recent
DoorDash’s layoffs are not a time to panic: they’re a time to rethink the delivery industry
Dec 01, 2022
How Checkers & Rally's plans to adjust as other brands adopt its double drive-thru model
Dec 01, 2022
How a local grain became the star ingredient of the stand-out pita at Gavin Kaysen’s latest restaurant
Dec 01, 2022
Subway is serving footlong cookie ‘subs’ for only one day
Nov 30, 2022
Chick-fil-A launches its first merchandise line
Nov 30, 2022
Featured
How 21 restaurant companies performed in their most recent quarters
Nov 22, 2022
How eco-friendly Seattle restaurant chain Just Poke is doubling in size in 2022
Nov 17, 2022
In the Mix this week: White Castle’s culture, a CREATE recap, Denver’s restaurant scene and more
Oct 27, 2022
How this emerging brand is planning on nearly quadrupling in size in just one year
Oct 21, 2022
RITZ Crushed Crackers Recipe Contest
brought to you by 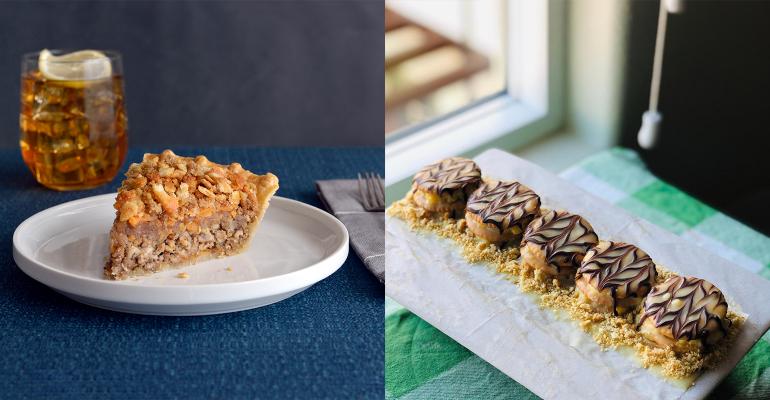 Sponsored by Mondelēz InternationalA new twist on an updated classic and a simpler version of an elegant dessert were this year’s Grand Prize winning recipes of the 2019 RITZ Crushed Crackers Recipe Contest.

Kim Dalton, the chef-owner of Texican, a Tex-Mex restaurant in Chicago, is the Grand Prize Winner of the 2019 RITZ Crushed Crackers Recipe contest in the Culinary Professional category. Her winning recipe, Pork-U-Pie, a savory and sweet pork and Cheddar mock apple pie with a crisp and buttery RITZ crumb topping, was inspired by a vintage recipe printed on the back of the RITZ crackers box.

“It’s really good,” she says of the mock apple pie recipe, which contains RITZ crackers instead of apples, a substitution that hearkens back to the Great Depression. “It’s kind of a classic.”

The rich, buttery flavors of RITZ crackers inspired Dalton to include crushed RITZ crackers in the filling and the crumble topping, and cream of tartar, cinnamon, and allspice to suggest apple pie flavors. Pork-U-Pie also contains lean pork, a favorite at her breakfast and lunch restaurant, and Cheddar cheese, which hints at another nostalgic dessert — apple pie with Cheddar.

New this year is the Culinary Student category, and Fernando Diala is the 2019 Grand Prize Winner with his mille-feuille. In place of puff pastry, his recipe calls for RITZ crackers to serve as the pastry layers. Diala, who is a student at the Institute of Culinary Education in Pasadena, Calif., got the idea from a baking and pastry class on mille-feuille.

“The professor said the pastry itself is a biscuit, so I had an idea,” Diala says. It took him a full evening and several attempts to perfect the recipe, which includes raspberry jam, vanilla pastry cream, and RITZ crackers, topped with melted semi-sweet and white chocolate. Diala, who left his accounting job in his native Manila, Philippines, to enroll in the Baking and Pastry Program, hopes someday to open his own restaurant.

The recipes were judged on creativity, methodology, and use of RITZ Crushed Crackers as an ingredient. The contest was sponsored by Nation’s Restaurant News, Food Management, Restaurant Hospitality and Mondelēz International Foodservice.