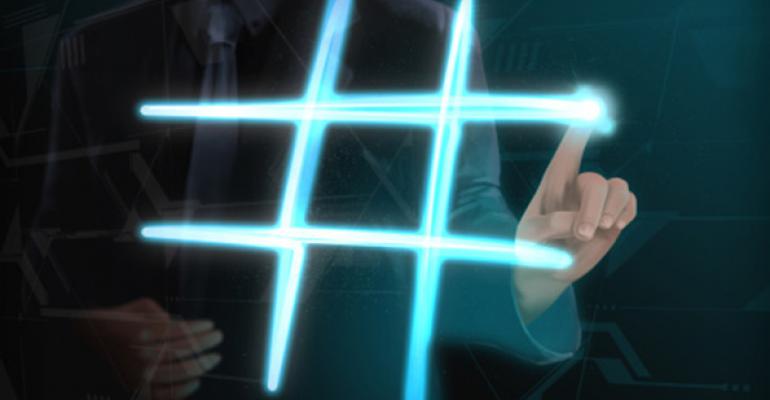 November has turned into a big month for restaurant-inspired hashtags in social media.

From Wendy’s one-day #EarnedIt promotion for the return of its Bacon Portabella Melt, to Olive Garden’s month-long #TeamNorth vs. #TeamSouth contest to crowdsource its regional Italian menus, brands have given a big push to what was once the pound sign.

Other brands have employed the hashtag as well, from Panda Express’ program to #ShareJoy with a giveaway of 888 $20 gift cards, to TGI Fridays in the United Kingdom’s widespread attention for #Togethermas, which involved a YouTube video of mistletoe on a drone.

“That Wendy’s hashtag #EarnedIt can be about something as mundane as making a basket with a piece of trash, but it can encompass a lot more things than that,” she said.

Gross offered this advice to brands looking to create a hashtag: “Keep it short. Keep it simple. Don’t go crazy. Make it something that people can remember.”

Dublin, Ohio-based The Wendy’s Co. marked the return of its Bacon Portabella Melt sandwich to its 6,500 locations on Nov. 17 with an all-day promotion that was mostly about nothing.

The company urged social media users to chronicle mundane aspects of their days and highlight them with the hashtag #EarnedIt.

“Life should be full of little rewards, and consumers really love this crave-worthy one,” said Liz Geraghty, vice president for brand marketing for Wendy’s, which on Friday held the No. 21 spot in the NRN Social 200.

Mirroring the social media success of its two “Pretzel Love Songs” trilled tweets campaigns, Wendy’s #EarnedIt promotion employed movie trailer voiceover artist Jon Bailey to read back more than a hundred of the tweets, which were also posted on social media channels such as Twitter and Facebook. The company also invested in a paid sponsorship of the hashtag on Twitter.

Gross of Moving Targets said effective hashtags can move offline into general conversations and keep the brand’s connection strong in the word-of-mouth world.

“People can use the hashtag when referring to that promotion, or they might be able use it in, ‘Hey, it’s Friday. I can have a beer at 4 because I hashtag ‘earned it,’’” she said. “It connects the business to the customer and the larger online community.”

Wendy’s is extending the #EarnedIt theme with a 15-second TV spot, also available on YouTube, that highlights its live Wendy character and her office colleagues setting the small things they do for each other to song.

Olive Garden, the 840-unit division of Orland, Fla.-based Darden Restaurants Inc., earlier this month introduced its new “Culinary Tours of Italy” promotion by asking customers to vote on which entrée it would add to the menu by using #TeamNorth or #TeamSouth hashtags on Facebook, Twitter or Instagram, or by checking in on Foursquare.

Each tour is inspired by Olive Garden chefs Flavio Tagliaferro and Paolo Lafata, and features the regions of Italy where they grew up, which are featured on the microsite as well.

Olive Garden, which on Friday ranked No. 10 on the NRN Social 200, is also giving away a trip to Italy to participants on social media platforms.

Picking up on a holiday theme, Panda Express on Wednesday targeted Twitter users expressing joy, thankfulness or appreciation, and surprised 888 of them with $20 gift cards during an eight-hour giveaway.

Today we're celebrating those who give thanks by giving out 888 gift cards in 8 hours. Ready. Set. #ShareJoy pic.twitter.com/FcF8eBNPnT

Using the hashtag #ShareJoy, a Panda Express spokeswoman said the campaign especially fit the Twitter platform because “social media networks are a powerful reminder for people to pause and recognize the people and events that bring joy into their lives.”

Dave Wallinga, vice president for guest marketing at Rosemead, Calif.-based Panda Express, said, “It's so inspiring to see all the posts of thanks and joy that are shared about family, friends, coworkers and others this time of year. We’re helping people take it one step further by encouraging them to also share joyful moments offline over a meal on us at Panda Express.”

Panda Express, which on Friday ranked No. 149 on the NRN Social 200, recently introduced a new online ordering platform that allows people in a group to pay separately. A spokeswoman for the 1,700-unit chain noted that “technology that helps bring people together over a meal” was part of the reason behind the online ordering initiative.

Given the global reach of the Internet, the #Togethermas hashtag from the 66-unit United Kingdom division of Carrollton, Texas-based TGI Fridays got a lot of attention this week as well.

The hashtag was used in a YouTube video of a mistletoe drone flying about a TGI Fridays unit in Manchester, England.

A spokesman for TGI Fridays, which on Friday ranked No. 52 in the NRN Social 200, said the company had no immediate plans for a mistletoe drone fly-by in the United States.