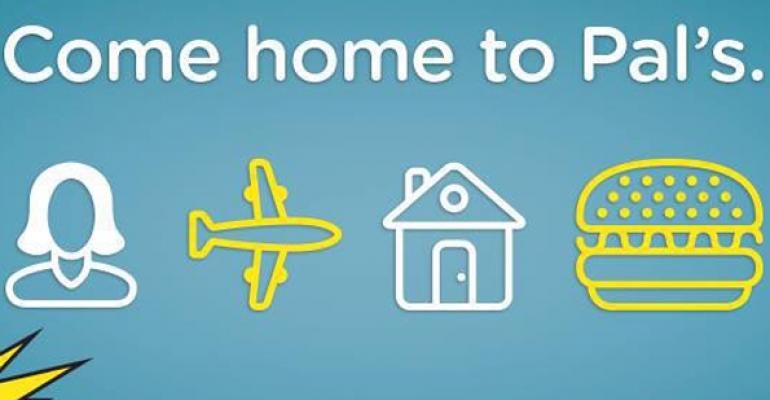 Officials for quick-service chain Pal’s said its “Come Home to Pal’s” contest outperformed expectations and bolstered the good will and fondness consumers have for the brand that make them reliable lifetime customers. Fast-casual concept Pancheros produced several humorous “How to Turn 21” videos to commemorate its 21st year of operation and ran that content through October and November on its Facebook and YouTube pages.

In both cases, marketers conceded that the endgame of building awareness and positive sentiment for the brands — instead of driving traffic or sales of a limited-time offer — made calculating a return on investment difficult, if not irrelevant. But both chains said the campaigns helped their long-term marketing strategies and that the brands would consider similar campaigns in the future.

Watch an ad for Pancheros' "How to turn 21" campaign

Recognizing that brand fans from 25-unit Pal’s market of northeast Tennessee and southwest Virginia had moved far away but still interacted with the brand on Facebook — often to express how much they missed Pal’s — the chain launched “Come Home to Pal’s” in early October.

The Facebook contest called for people to nominate their far-flung friends to win a free trip home to Tennessee for the holidays, as well as a homecoming party at the nearest Pal’s for them and 25 of their friends. President and chief executive Thom Crosby said Pal’s would have been happy with 1,000 entries, but the Kingsport, Tenn.-based brand received 2,400.

The brand announced its two winners on Nov. 21: Natasha Almeida, a Marine living in California who had not been home for the holidays the past two years while serving in the Middle East, and Tara Abbitt of Ankeny, Iowa, whose niece in Tennessee introduced her to Pal’s years ago and who visits the chain on every family visit to the area.

The promotion was not tied to the sale of any item, but the positive energy was apparent on the brand’s Facebook page and palpable in the restaurants, making the branding effort a success, Crosby said.

“What excited us about the campaign was the buzz going on around here — you have to be in our stores to hear how exited our customers were for this promotion,” Crosby said. “It was made more powerful when that traditional media and social were so tightly tied together, and that is definitely a tactic we want to maintain and strengthen.”

He touted the program as “absolutely critical” to Pal’s long-term marketing goal of forging a personal connection with guests to drive loyalty.

He added that the average Pal’s customer visits the restaurant chain three times per week, but a little more than half of the 40,000 customers the brand has surveyed since September say they come to Pal’s daily.

That level of loyalty and frequency leads Pal’s to take a longer-term view of the value of a customer, Crosby said. Rather than think of a customer as the person paying $4 one time for a sandwich, Pal’s sees that person as somebody who could be worth as much as $30,000 over the decades she regularly visits Pal’s.

“That’s our primary decision-making filter,” Crosby said. “At just over 1,000 total employees, we need each and every individual to make the right decisions, so we tell them the lifetime value of this customer is just under $30,000, so it’s not about this one transaction today.

“It’s one of the reasons why we’re willing to do promotions like this,” he continued. “We want to make that lifetime connection, and that’s a strong belief in our culture. We obsess about the lifetime relationship with our customers.”

Pancheros Mexican Grill: 21 and up

To celebrate its 21st anniversary, Coralville, Iowa-based Pancheros invited its biggest fans to “generate content for us and with us, so we could celebrate with the people who brought us to 21 [years in operation],” said director of marketing Reid Travis.

For its “How to Turn 21” video series, the 65-unit chain visited bars and local watering holes near its locations to interview brand fans, some of whom — actually, all of whom — were in various states of inebriation, about how best to celebrate reaching legal drinking age.

Pancheros produced 10 videos in all for its Facebook page and YouTube channel. The shorts featured the “Leading Consultant” character, a hapless introvert ill-suited to interviewing drunk people, who nonetheless asks real people to recount their memories of their 21st birthdays. Compared with typical Facebook posts for Pancheros, the videos tended to receive more engagement as measured by the numbers of likes, comments and shares from brand fans. 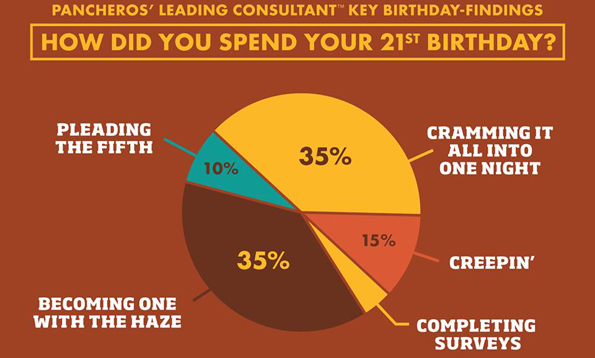 “Content marketing is big right now, and it’s important to entertain audiences,” Travis said. “Our followers, wherever they might be, are following us for a reason, and we’d like to give them a better reason. We’re trying to say, ‘We’ll make it worth your time to let us into your Facebook feed.’”

As with Pal’s digital-branding promotion, the initiative for Pancheros was not tied to the sale of a product or to traffic for a short promotional window, so the return on investment was not quantifiable for the “How to Turn 21” series. Instead, Pancheros treated the digital-branding strategy as part of its larger marketing plans, which in aggregate have contributed to a positive year for the business, Travis said.

The mix of traditional media like TV and radio varies from market to market for Pancheros, but some amount of those platforms always works to support the systemwide branding effort the chain makes in digital marketing, Travis said.

“There’s not a firm correlation or causation, but we believe that with a balanced marketing mix, they’ll build off each other,” Travis said. “The videos alone won’t drive traffic, but coupled with other things, we get one more area where people interact with us as a brand.”

He added, without divulging specifics, that Pancheros’ average unit volumes have been climbing steadily this year and that “a handful more” of restaurant openings are planned for February and March. Travis could not attribute the sales and unit growth to any one promotion or initiative, but he reiterated that a properly allocated marketing budget was crucial to the brand’s success.

“You have to be timely, with a relevant message,” he said. “We take a strong look at who our customers are, and what they like, and we act accordingly.”