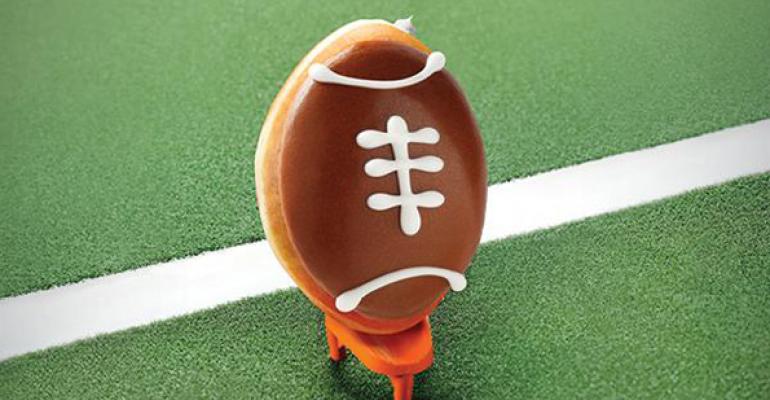 Brands get extra marketing yardage out of pre-Super Bowl controversy

Restaurant brands have been getting a kick out of the New England Patriots’ #DeflateGate controversy in the lead-up to Sunday’s Super Bowl game.

Brands as varied as the national Krispy Kreme, regional JJ’s Red Hots and local The Nugget Spot picked up on the #DeflateGate controversy with tweets and special offers.

The #DeflateGate hashtag was borne out of accusations that the Patriots used under-inflated footballs during the recent AFC Championship game against the Indianapolis Colts.

Patriots head coach Bill Belichick has said he was “shocked” and had “no explanation” for what happened, and quarterback Tom Brady spent an entire press conference discussing the football equipment.


Krispy Kreme ranks No. 13 in Nation’s Restaurant News’ Social 200, with a total of 6.7 million followers and 75,500 active participants in its social media channels.

“There’s been so much talk about balls … that the jokes just kinda write themselves,” said JJ’s founder Jonathan Luther in a statement. “We felt like it would be irresponsible to not participate.”

Brandy Newton, director of marketing and brand development for JJ’s, said, “Our friends and fans on social media are completely eating this up, pun intended.”

The brand is especially strong on Instagram, where it has 1,700 followers, and it also uses Facebook and Twitter. Newton said the Deflatey flavor was inspired by fan feedback.

“The Dog of the Week is JJ’s ongoing program to collect fan feedback for weekly specials,” she said. “The program is almost solely driven by social media. For this one, we plan to continue to push photos this week of fans consuming the dogs.”


Even single-unit restaurants were getting on the #DeflateGate action.

The Nugget Spot in New York City was offering an “Underinflated Nugget” special. The Super Bowl week special, available through Feb. 2, includes 11 “underinflated” half-size nuggets and one regular nugget, for $8.50. The nuggets are served with sauces by chef Jason Hairston.