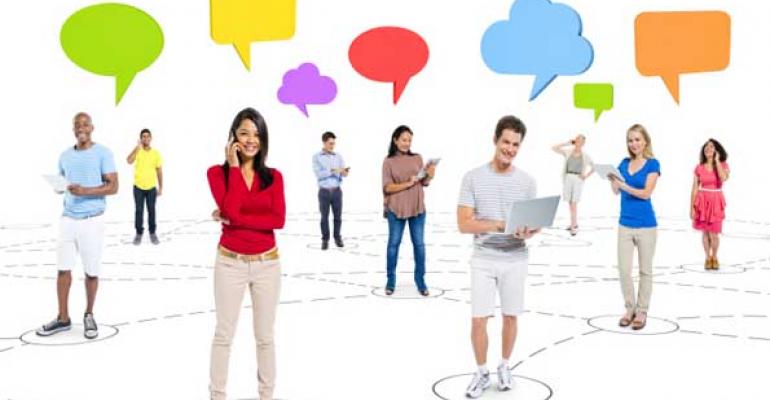 Organic reach in social media just isn’t what it used to be.

While restaurant marketers were not ready yet to declare the onset of “Facebook Zero” — as a white paper from Ogilvy & Mather published in March had — several of those executives characterized their content in social networks, especially Facebook and Twitter, as reaching fewer and fewer of their fans and followers without the use of paid or promoted posts and tweets.

As Facebook’s algorithms change and the user bases on Twitter, Instagram and other networks explode, brands have turned to several different tactics to try and break through at engagement levels they enjoyed years ago on those platforms.

The study on Facebook from Ogilvy & Mather confirmed that organic reach, or the percentage of brand fans who receive a company’s social media content in their news feeds, dropped sharply from 12.05 percent in October 2013 to 6.15 percent by February 2014. For pages with more than 500,000 likes, organic reach during that time period fell from 4.04 percent to 2.11 percent.

Steve Governale, the category director for restaurants at Facebook, told attendees at the spring meeting for the Marketing Executives Group of the National Restaurant Association that maintaining and growing organic reach depends upon content that fans would want to share and promote in their friends’ news feeds.

“Where we’ve seen brands have success is when they’ve taken the creative elements to it and seriously put that discipline into how they’re publishing content on the platform,” he said. “As a marketer, good creative is the single-biggest driver for organic engagement.”

Executives from Moe’s Southwest Grill, Which Wich, Hospitality Democracy and Toppers Pizza agreed that shareable content was important but hardly a cure-all solution for the issue of lower organic engagement. They shared their best recent strategies with Nation’s Restaurant News.

Moe’s Southwest Grill, the fast-casual chain of more than 500 locations, shifted some of its social media spending to buying promoted tweets on Twitter to increase engagement on that platform, chief marketing officer Paul Macaluso said.

But the key to making the brand’s social marketing more efficient was not just a matter of paying to optimize what Moe’s was already tweeting, he said. The brand sought to integrate its social media into its broadcast media strategy, which on Twitter meant paying for some “contextualized tweets” around a cable-TV buy. 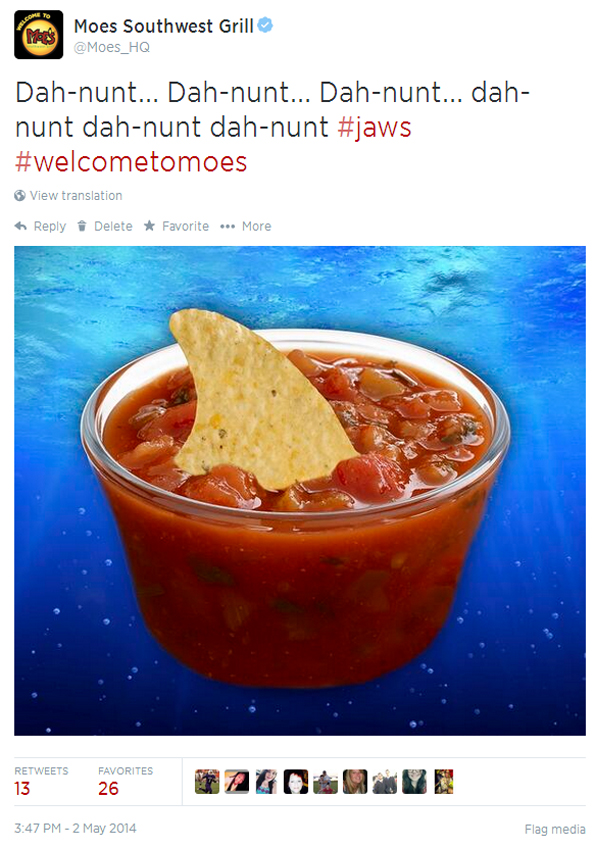 “We haven’t done a lot of national cable advertising in our past, so we tried to maximize our four-week flight,” Macaluso said. “The week before our spots ran, we got the list from our agency of which shows on which networks would run the commercials and asked which would be a fit for our brand to tie into social media.”

One of those opportunities happened to be a commercial running during a TNT broadcast of the 1977 horror classic “Jaws.” Moe’s worked with Twitter to develop a humorous picture that hopefully would get shared and retweeted: a chip shaped like a shark fin, swimming in a pool of salsa, with the hashtag #WelcometoMoes.

“Twitter served that tweet to anybody tweeting anything related to ‘Jaws’ during the broadcast,” Macaluso said. “We got much higher rates of engagement than we would have with just an unpromoted tweet. That balance of having real-time social media is amazing, but we might not be ready for it at every moment, so we work on thinking ahead to ways we could create real-time events.”

Which Wich: Engaging even more

Hala Habal, director of communications for Dallas-based Which Wich, acknowledged that the fast-casual brand has to “pay to play” in social marketing more than it used to, but paid posts are only a piece of its strategy because “you don’t necessarily win anybody over because they see your ad.”

What does win over current guests and their friends is being responsive to comments left on the brand’s social networks and doing so in a way that creates an environment similar to the irreverent hospitality Which Wich tries to cultivate in its 400 locations open or under development, Habal said.

“Paid or not paid, it has to be on point with our brand and our left-of-center voice,” she said. “If it’s not consistent across our store, the website, Twitter and Instagram, it won’t work. … Nobody goes unanswered [on social media] for 24 hours, and that has nothing to do with paid content.”

Which Wich has set aside dollars for paid social media so that it does not rob its local-store marketing budget, Habal added. The increased one-to-one engagement that allows has helped its organic reach as well, even as Which Wich experiments on other platforms where it finds customers and employees, such as Vine or Tumblr.

“Every one of our stores has its own universe, and customers and employees create different hashtags for their locations,” Habal said. “We didn’t pay for that; we let those people find their community. There’s an Instagram page where people make their own unusual Which Wich sandwiches, and it became sort of an underground menu for us. You can’t buy that. If I put that in a paid ad, it wouldn’t ring true.”

Multiconcept operator Joe Sorge, the founder of Milwaukee’s Hospitality Democracy, built a loyal following for his restaurants like AJ Bombers, Smoke Shack and Swig by being one of the first restaurateurs to leverage Twitter as a branding tool back in 2008 and 2009. But lately, the decline of organic reach on Facebook and the equally cluttered screens on Twitter from millions of new users has made posting to those networks feel like “shooting something into the abyss of information,” he said.

Paying $10 or $20 at a time to promote Facebook posts has increased the reach of his content from 5 percent organic reach to 10 percent paid reach, Sorge said, but he calculated he spent slightly more than $2,200 to acquire slightly more than 6,300 likes for his restaurants’ pages since November, or roughly 30 cents per new like.

“Well, what was the point of that?” he said. “But if you can only reach 5 percent of those people without spending any money, it’s a fruitless endeavor.”

He has begun using paid Facebook posts as a way to build up his email lists for his restaurants, including a new concept he plans to open soon, a doughnut shop called Holy Moley.

“I’m going to build an audience and direct them to a database that I own: my email list,” he said. “I can control the message, retarget and do all those things without spending any more money.”

At the time of his first promoted post for Holy Moley, the shop had 345 organic likes, but Sorge then spent $30 to reach more than 7,100 people on Facebook, which resulted in 179 likes, comments and shares. More importantly, that $30 spend netted 122 new email subscribers for a restaurant yet to open.

“If I want to make sales and get a return on my time, it’s by utilizing my email list, which has its own set of best practices: regular frequency, tailored messaging, and regular new content,” he said. “I want to spend more time on email, because I can prove I can fill seats with it.”

Scott Iversen, vice president of marketing for Whitewater, Wis.-based Toppers Pizza, agreed that the social-marketing picture now incorporates all of the above strategies from topical content for paid posts to responsiveness and engagement to integrating with email lists and broadcast strategy.

The key for his brand of 61 pizza restaurants in 10 states is to keep experimenting with all of it and tracking what benefits the chain gains from paid social.

“One of the big things that evolves in social media is you have to pay attention to what those media are,” Iversen said. “We have a keen eye on Instagram right now, because we have to be listening to our audience and watch where they’re going. Facebook and Twitter still have the largest audiences. But there might also be some platforms out there more relevant to your guests.”

The brand always had high engagement on Facebook for its irreverent brand voice and its highly participatory promotions that usually got Facebook fans voting for their favorite pizzas or for flavors they would like to see, he added. Now Toppers is adding the paid component to that strategy to track how much of a boost it delivers.

Like Sorge, Toppers is “doing as much as we ever have with email,” but the brand skews very heavily toward college students who barely use that medium, so it tries to optimize its content across all of email and social media with the same content principles.

“We’ve invested more resources from the standpoint of doing more stuff creatively with our email blasts,” Iversen said. “We’re working with an outside vendor to make sure we get past all spam filters, and we’re focused on engagement metrics like open rates and clickthroughs.”