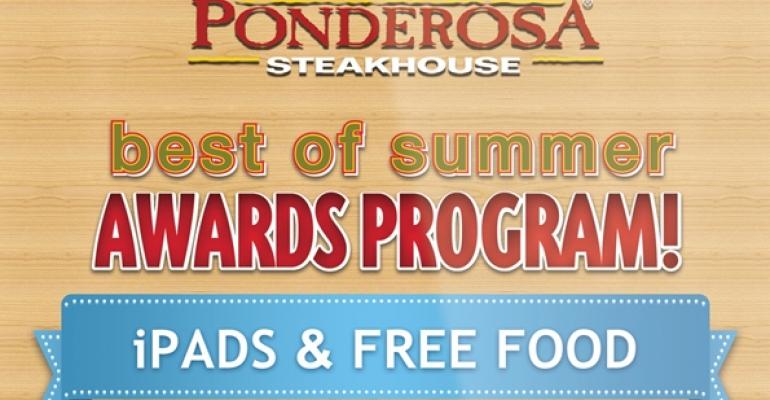 Ponderosa and Bonanza's smartphone and iPad app allows guests to scan a QR code on the merchandising materials to find out if they have a won prize.
Operations>Technology

The Ponderosa and Bonanza steakhouse chains have introduced a smartphone app in a summer promotion that holds potential for helping them attract a younger clientele.

The chains rolled out the app in mid-June, offering customers prizes and rewards in restaurants. It also lets them potentially develop personal and technological connections to those patrons in the future, said Jon Rice, chief marketing officer and executive vice president of Plano, Texas-based parent company Homestyle Dining LLC.

RELATED
• How restaurants can make the most of social media
• Restaurants turn to mobile apps for marketing
• More social media news at NRN.com

The company has typically sponsored a promotion every summer tied to a major soft-drink manufacturer, Rice told Nation’s Restaurant News. But the app takes the promotion further.

“It’s generally pretty basic, featuring a 32-ounce large drink,” Rice said of the promotion. “It’s not exactly groundbreaking. [Franchisees] were really challenging us to develop something that had a little bit more excitement and the ability to engage guests, especially the younger segment of our demographic.”

Rice said the Ponderosa and Bonanza concepts skew toward an older demographic. Recent in-house surveys found that about 17 percent of the concepts’ guests were in the 18- to 29-year-old range, he said.

Guests scan a QR code on the merchandising materials to find out if they have a won prize. “Most of the prizes are discounts, free meals, free drinks or some larger prizes like gift cards and iPads,” Rice said.

The app also gave Homestyle Dining a chance to tout other improvements at the concepts, Rice said. “We’ve been doing a lot more as a concept to bring in fresher, more flavorful items on our buffet and our entrée menu,” he said. “We thought this was a way to engage those people and get them to pay attention to some of the things that we are doing differently to appeal to the segment.”

Smartphones’ appeal and use among younger customers and professionals is high, he added. “You live and breathe on your smartphone, from sending email and text messages to taking pictures and checking your Facebook page. It’s personal,” he said. “There’s instant gratification as well. They can find out immediately if there’s something they can win. That’s what made it appealing.”

To reveal the award, customers rub their finger across the smartphone screen, “like a virtual lottery card,” Rice said. With one button, they can share the results on Facebook.

Franchisees have access to their own dashboard, or “command center,” to observe app usage.

“They have an interface that makes it possible for us to manage the prizes in real time,” Rice said. “We can manage it as actively as we want. Of course, we can set up a recommended a prize structure for the franchisees, but they have the ability to go in every day and look at the level of activity, what prizes people have won and whether anybody has shared it on Facebook. They can get a feel for whether people are actually excited about it.”

In addition, users provide some basic personal information when they download and first use the app, which gives demographic information to the franchisees. “You can see in real time what the profile of the user is,” Rice said.

Bonanza, which turns 50 years old this year, has some longtime franchisees who were reluctant to roll out the app at first, but Rice said they have embraced what the technology offers.

“In the old days with advertising, it was difficult to measure the impact,” Rice said, “especially with coupons, and even email.”

The chains can also send additional messages to app users. “You can invite them back. You can send them a thank you gift. Some are automated,” Rice said. “It basically becomes another channel of communication with your customer.”

Homestyle Dining LLC has 142 Ponderosa and Bonanza steakhouse restaurants in the United States.