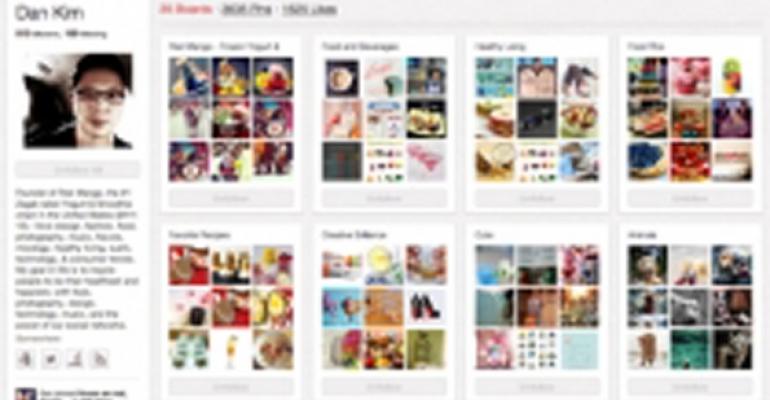 In the fast-changing social-media world, new platform darlings appear at a regular clip. The latest, Pinterest.com, seems to be pinning competitive hopes to the wall and drawing interest from restaurant marketers.

Earlier in February, Pinterest passed 10.4 million registered users, growing 145 percent since Jan. 1. Unlike Twitter, which is based on 140-character verbal spurts with photos occasionally attached, Pinterest is all about the pictures, which gives restaurant users wide latitude in communicating menus and philosophies.

“Pinterest is a perfect fit for any brand that can establish an emotional connection with its target consumers using pictures,” said Dan Kim, founder of Dallas-based Red Mango and a self-described “Pinterest addict”.

“Although fashion is definitely the industry that can leverage the Pinterest platform from both a visual and e-commerce perspective, foodservice brands can be equally effective, if not more so, simply because consumers love seeing pictures of beautiful food,” he said.

Christina Wong, an account supervisor with Santa Monica, Calif.-based Murphy O’Brien Public Relations, said the seven-unit Tender Greens brand has used Pinterest as a way to address marketing challenges, such as “how to convey Tender Greens’ overall company philosophy and communicate the multitude of ways that they’re so much more than just a healthy ‘salad place.’”

Wong said Los Angeles-based Tender Greens has been on Pinterest for about a month and the boards are managed by Erik Oberholtzer, co-owner and chef, as are the other social media sites such as Facebook, Twitter and Tumblr.

“Tender Greens uses their Pinterest page as an overall brand page about the Tender Greens lifestyle, what they’re doing as a company and what inspires the individual chefs,” she said.

1. Post pictures of your food: “People love seeing pictures of appetizing dishes. You can post pics you've taken professionally, or those that are generated by sharing communities like Instagram,” Kim said. “In fact, we ‘pin’ pics from Instagram into Pinterest. Each time someone sees a pic of your food, you remind them of your brand.

“Make sure, however, that you're not posting ads — the pictures should be natural and real, not promotional,” he said. “Pinterest is not about selling, it's about emotional engagement with consumers so that your brand becomes a part of their lifestyle.”

2. Post (or re-pin) pictures beyond food: “This is important because Pinterest needs to be relevant to consumers beyond just your products — otherwise, you'll be categorized as a brand just trying to sell and promote through Pinterest, and that is not the point of this platform,” Kim said.

“Red Mango, for example, believes in healthy living and style/fashion. With this in mind, we post infographics and other useful visualizations with healthy living tips,” he said. “We also post pics of colors we love, or photographs that inspire creativity. The key is to create Pinterest boards that appeal to your target consumers throughout their entire emotional spectrum, not just their interest in your products.”

3. Become an active participant: “Don't just be a pinner – instead, actively re-pin, like and/or comment on other pins,” Kim said. “The key for the brand is to express a personality, because personalities are using, shaping, and being influenced by Pinterest.”

1. Picture it: “Pinterest’s boards are a wonderful way to organize and present information to anyone willing to click on them – they’re like big photographic hashtags,” Im said. “The trick is to give people a reason to click. Since Pinterest is such a visual medium, it’s important to make sure that anything presented on the boards, whether it’s about Mama Fu’s or otherwise, is new, interesting, or unique both in information AND presentation.”

2. Engage: “Like any social media outlet, Pinterest is a community,” Im said. “As a Pinterest user, it’s a great feeling to contribute content that others pick up and share with friends - so it’s important to reciprocate. I also make a point to involve others in our pins whenever possible, whether by sharing a moment with Mama Fu’s fans or giving a shout-out to the creators of user-generated content. Plus, what better opportunity is there to learn about the passions and interests of our fans than by engaging them on a more personal level?”

3. Have fun: “That’s the main draw of Pinterest. And when we have fun, people pick up on it,” Im said. “Whether it’s photos from a recent promotion, user-generated content, or random funny/inspiring bits from the Internet, ‘fun’ is the thread that holds it all together. For example, we have some customized ‘art’ boards on our page that don’t really serve a specific function, they’re just fun to make.”

1. Build a community: “Pinterest provides a way to virtually build a community of like-minded people who share our philosophy and are hopefully inspired by what we share,” Oberholtzer said. “Pin visually stunning photos that share what your brand’s story and message is all about. People who follow Tender Greens and are customers at our restaurants believe in farm-to-fork sustainability, supporting local farmers and a living healthy lifestyle.”

2. Participate and be a part of the conversation: “Engage with the Pinterest community beyond marketing your restaurant’s own message,” Oberholtzer said. “Comment on other users’ boards, like items and follow interest people. It’s important to remember that Pinterest is not a one-way marketing or advertising platform, it’s a virtual inspiration board where users pin ideas and what inspires them to reference later. We share what inspires us as chefs and restaurant owners in addition to sharing content about things we like including local small farmers and artisans, craft breweries, art and artists, recipes, dish ideas and inspiring news articles.

3. Offer useful Information or resources. “It’s not all about Tender Greens all the time,” Oberholtzer said. “We do share facts about our company, but we also share expert tips about what fruits and vegetables are in season, recipe ideas, sustainable design ideas, a local farmer’s market map, wedding/catering resources, craft beer reviews and even gardening/farming techniques.”