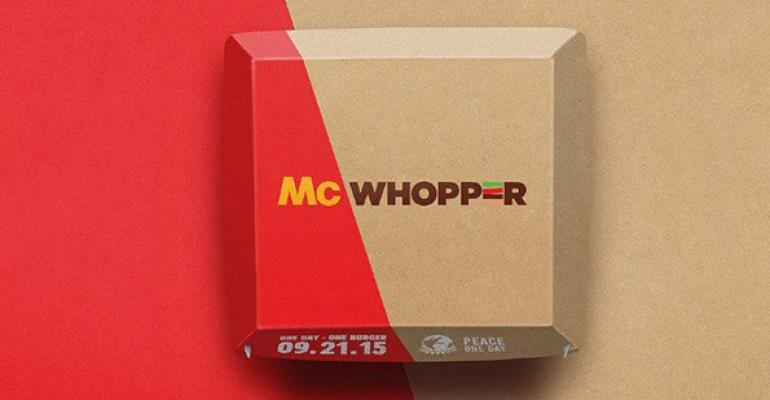 Burger King to McDonald’s: Can’t we just get along?

Burger King extended an olive branch with a self-serving marketing twist to McDonald’s Corp. on Wednesday, proposing a one-day ceasefire in the burger wars.

And McDonald’s immediately responded with a definite maybe — which may have been a costly mistake.

In honor of the Peace Day, on Sept. 21, a day of global nonviolence promoted by the non-profit organization Peace One Day, Miami-based Burger King invited Oak Brook, Ill.-based McDonald’s to collaborate on a one-day pop-up restaurant in Atlanta — halfway between the two brands’ hometowns.

Under the proposal, the restaurant would serve a one-day hybrid of the chain’s two signature burgers: the McWhopper.

Taking the best ingredients from McDonald’s Big Mac and Burger King’s Whopper, the burger would be the “culinary mashup of a lifetime,” that would inspire guests with “the mouthwatering taste of peace,” according to press materials.

Proceeds would benefit the organization Peace One Day.

In an open letter to McDonald’s, published in full-page ads in The Chicago Tribune and The New York Times, Burger King offered the collaboration as a way to draw attention to Peace One Day’s attempt to create an annual day of global unity.

“They have a powerful rallying call ‘who will you make peace with?’” the letter said. “All we need from you is a few McDonald’s crew members to help combine your ingredients with ours.”

Burger King also created a website, www.mcwhopper.com, showing proposed packaging, uniforms and a restaurant design that splits trademark colors and logos in half.

They’ve even proposed a recipe for the McWhopper.

McDonald’s CEO Steve Easterbrook responded with a tweet and Facebook post that called the idea “inspiration for a good cause,” though he suggested the brands could do something even bigger to make a difference.

Then he got serious.

“Let’s acknowledge that between us there is simply a friendly business competition and certainly not the unequaled circumstances of the real pain and suffering of war.”

Still, he added, “We’ll be in touch,” adding with the P.S.: “A simple phone call will do next time.”

Consumers, however, weren’t happy with the response.

Burger King, on the other hand, got a lot of love on social media.

It remains to be seen whether either chain will follow through on the proposal.

In a statement, Fernando Machado, Burger King senior vice president for global brand management, left himself an out.

If McDonald’s says no, he said, “We’ll hopefully have, at the very least, raised much-needed financial support and consciousness for the great cause that is Peace One Day. And both are well worth the effort.”

Meanwhile, the notion of peace and collaboration appears to be contagious.