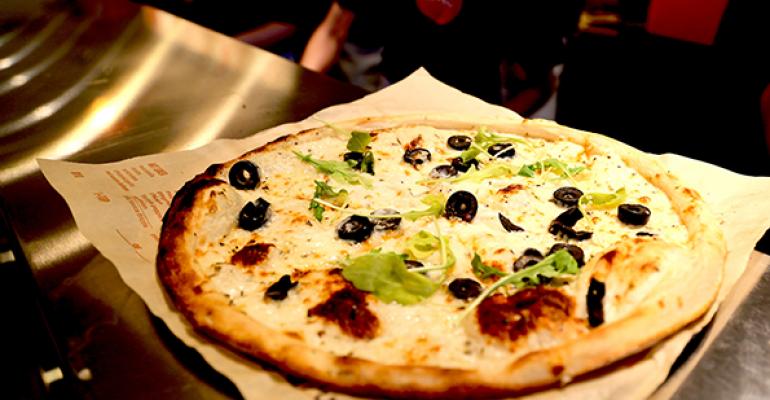 <p>Blaze&rsquo;s signature pizzas include the Green Stripe, priced at $7.95, with pesto drizzle over chicken, red peppers (this one without), garlic, mozzarella and arugula.</p>
Marketing

The Los Angeles-based fast-casual pizza concept will open its first Dallas-Fort Worth location Friday, and will give away a free pizza to any guest who follows the brand’s main three social media accounts, indicating the increasing importance of those platforms in building brands.

The offer is only valid on Friday, and only at the sole Frisco, Texas, restaurant, which is being developed by the Saddles Blazin LLC franchise group, which has another unit in New Orleans and development rights to most of Texas, except for a section of southern Houston, and all of Alabama, Louisiana and Mississippi.

The social media giveaway aims directly at Blaze Pizza’s target audience of Millennials, a spokeswoman said, with strategy of creating social buzz and drawing a large first-day audience as the brand enters the new market.

Nation’s Restaurant News toured the new Blaze Pizza restaurant in Frisco, which is the 66th unit of the growing chain. Hazard said the interaction between guests and the staff who build pizzas makes jobs at Blaze appealing to younger employees.

“That interaction between the customers and employees is really attractive for the Millennial workers,” Hazard said.

The new Frisco, Texas, unit is in an outdoor shopping mall that includes such retail neighbors as Applebee’s Neighborhood Grill & Bar, Best Buy, Super Target, Old Navy and Chili’s Grill & Bar. It covers 3,375 square feet, and seats 82 diners inside and 32 customers on the patio.

Hazard said he considered the open Wood Stone oven, which bakes pizzas made with the brand’s specially developed dough in three minutes, the centerpiece of restaurant, although large murals and assorted and movable tables and seating are also highlights. The 11-inch pizzas range in price from $5 for a basic pizza topped with tomato sauce, mozzarella and Parmesan cheese, to $7.95 for build-your-own and signature options.

“We make sure employees change their gloves and walk each gluten-free pizza through the entire process,” Hazard said.

The first Blaze Pizza opened in August 2012, in Irvine, Calif. The company now has restaurants in 15 states and the District of Columbia.

Correction: May 22, 2015 An earlier version of this story misidentified the location of Blaze Pizza’s headquarters.