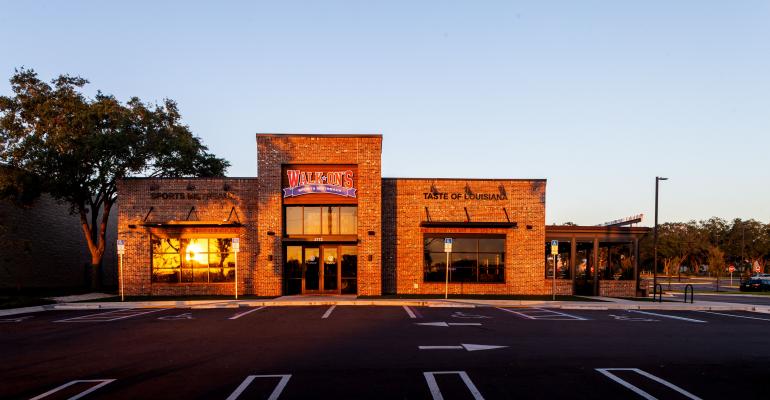 Walk-On’s focused its franchise operators on making sure they were able to support both team members and their communities.
Top 500 Restaurants>Snapshots of Success

Smaller restaurants that were opened post-pandemic are hitting sales records

When the pandemic shut down indoor dining, Walk-On’s Sports Bistreaux CEO Brandon Landry was determined to prevent the company from “knee jerk” reactions that would take the brand away from its core.

“For us, it was completely the opposite,” said Landry. “When they shut down the world in 2020, we sat down and said, ‘What got us to this point? Let’s double down on that.’ And that’s our culture.”

For Walk-On’s, a Louisiana-flavored concept with a focus on sports and great food, that meant focusing its franchise operators on making sure they were able to support both team members and their communities. For a time, franchise royalties were suspended.

“Whatever little dollars our franchisees had coming in, we wanted them to take care of their teams and take care of their communities,” said Landry. “By doing that, I think it brought us back to our purpose of bringing people together and of being more than a restaurant.”

Like most full-service concepts during 2020, Walk-On’s had to pivot to takeout, of course. But Walk-On’s didn’t cut the menu or slow growth.

Opening restaurants at a time of limited capacity during that period was also eye opening. When one new restaurant opened in Texas during a period when restaurants could only allow 50% capacity, for example, it turned out to be one of the best opening weeks the chain had ever seen as far as sales, Landry said.

“So that made us kind of scratch our heads a little bit and go, ‘Man, do we really need these big buildings?’” he said.

Company officials then developed a new prototype design, dubbed “Bulldog,” that cut the then-typically-8,000-square-foot building to about 7,000-square-feet, while growing space to support more takeout.

“It has all the things that make a Walk-On’s ‘wow.’ It still has all the brand elements. It just shrunk the size of the footprint, and we noticed we could still get table turns and efficiencies,” he said.

The move has cut about 25% out of buildout costs in some markets. The first Bulldog-design location to open in Lakeland, Fla., last year is a sales leader for the chain. Landry said the company is still working on finding even more efficiencies with design.

As restaurants reopened fully through 2021, Walk-On’s also focused on its off-premises business.

Takeout — which was only about 10% of sales pre-pandemic— has settled at about 15% of sales today, but Landry sees opportunity for growth there. “We’d love to be over 20% in our takeout sales, so there are a lot of things our team is working on now in design and operations,” he said.

Walk-On’s recently opened its 65th location in Florida. The almost all-franchised brand (there are three company-owned units) expects to reach 14 states by the end of 2022, including new markets like Arizona and Las Vegas. In 2023, Walk-On’s expects to reach another five states with about 25–28 restaurant openings.

The next step could be taking the brand international. The team is planning a trip this year to Dubai to meet with potential franchise operators in that part of the world.

Landry credits the company culture as well as Walk-On’s Blue Chip program, which lays out a clear career path for restaurant workers to move into management or even become franchise operators.

It’s a culture that makes people want to be part of the team.

“It’s that walk-on mentality,” said Landry. “You play for the true love [of the game].”