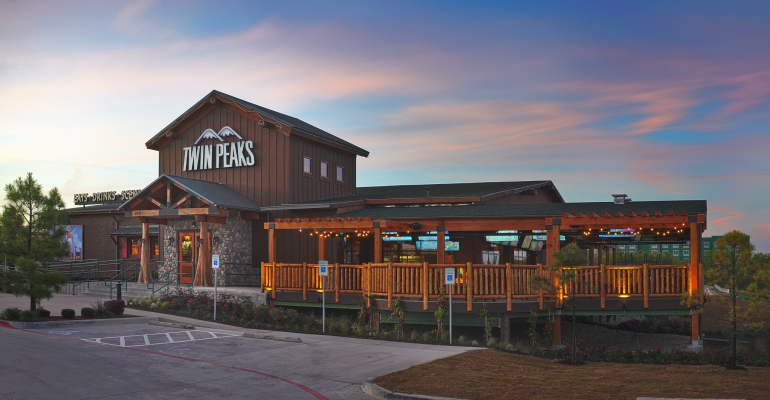 Twin Peaks works with Black Box Intelligence to closely follow what both employees and customers think about the brand.
Top 500 Restaurants>Snapshots of Success

Twin Peaks out to prove that experiential dining is back

You’ve just returned from a hunting trip, and you approach the Twin Peaks lodge to cool down after the experience. You want a place to kick up your feet and relax, maybe watch a game. Twin Peaks is there for you.

Inside the warm restaurant, there’s a 29-degree beer waiting for you alongside TVs covering the wall tuned to every game imaginable. It’s the perfect place to watch The Big Game — or any game, for that matter.

“It's a place that you can escape and just kind of lose yourself in the event,” said Joe Hummel, CEO of Twin Peaks.

But Twin Peaks holds an advantage over other casual-dining brands, Hummel said.

“Our advantage over other restaurants [is that] other restaurants serve a purpose of just having a lunch or dinner, where we serve so many multiple purposes,” he said. “Our guests seem to come in quite a bit often.”

Twin Peaks works with Black Box Intelligence to closely follow what both employees and customers think about the brand.

“We’re trying not to stay stagnant; we understand our audience. But we also want to continue to evolve what our audience is experiencing,” he said.

Hummel said tools like QR codes and menu development are helping to improve that experience. Twin Peaks used QR codes to its advantage, crafting new menu items on a rolling basis rather than twice a year as it had done with prior paper menus. The digitization of the chain’s menu allowed for the Twin Peaks chefs to slowly roll out new food on a trial basis. This kept the staff from being overwhelmed by a new menu all at once and the cooks from learning all new dishes to prepare. Instead, items like the chain’s spicy meatballs were rolled out monthly, one at a time.

“We don't do LTOs. We just do evolution and innovation,” Hummel said.

Of course, no beer commercial is complete without the girls. At this “breastaurant,” the Twin Peaks girls are essential — another part of the DNA, according to Hummel. That’s still true even with the cultural awakening that followed the #MeToo movement.

“We put our Twin Peaks girls on a pedestal, they are iconic for us,” said Hummel. “They are also somebody's daughter, sister, girlfriend, wife, and we make sure that they are treated at the highest level.”

The “girls,” as they’re still called, don’t have to buss tables or clean — typical server duties at other restaurants. “We make sure that the Twin Peaks girls’ sole role is to focus on the guests,” said Hummel.

And whatever people may think about the status of the woman at Twin Peaks in a post-#MeToo world, the brand is seeing success. For the brand’s 90 units, 10 of them were opened last year alone, which for casual dining is saying something. The brand hopes to open between 22 and 26 stores in the foreseeable future.

“The brand is hot right now,” he said.