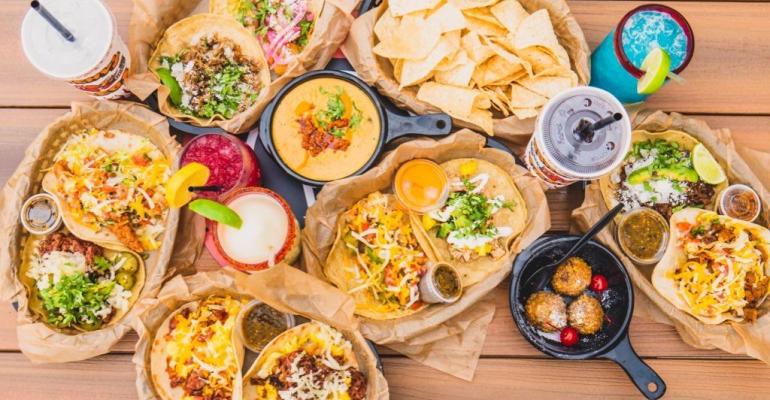 Founded as a food truck in 2006, Torchy’s has since established itself as a leader in creative, scratch-made tacos and an irreverent attitude.
Top 500 Restaurants>Snapshots of Success

Torchy’s Tacos focuses on the basics, tweaks around the edges

Despite the national presence of brands like Taco Bell and Chipotle, much of America still has a shortage of taco options. That’s a fact that Austin, Tex.-based Torchy’s Tacos is banking on fixing as it continues to grow out of the South into the Mountain West and Midwest.

Founded as a food truck in 2006, Torchy’s has since established itself as a leader in creative, scratch-made tacos and an irreverent attitude, with a full bar in most locations. The fast casual crossed the 100-unit threshold at the end of 2021 and grew its sales beyond the $100 million mark as well.

Founder and CEO Mike Rypka said the company has kept steady in the past two years by holding its focus on good food and hospitality. “I think there was a tendency to sort of look for the silver bullet that was going to get the sales back, and we've just kind of kept our head down and kept focusing on the basics,” he said.

The chain has also adapted with the new realities of operating a restaurant. Rypka said Torchy’s has made the off-premises experience more seamless for guests by adding a pick-up area, including one in test where staff can pass orders from the kitchen directly to pick-up cubbies.

Torchy’s is even testing a drive-thru pick-up window at a new location, and Rypka said the company has other “cool designs” that it will start testing early next year. He added that stores had started to get too big, so Torchy’s had “right-sized” to about 3,500-4,000 square feet. It’s also developing a smaller footprint without a bar that could easily fit in urban locations.

“It could also be a unit that we could plug in if there was a 2,500 [square foot] unit, it might be a good size to put in maybe a little closer without fully cannibalizing another restaurant in the city,” Rypka said.

While dine-in customers have come back, Rypka said, off-premises remains about 40-45% of business.

Torchy’s sold a $400 million stake in the business to investors at the end of 2020, and was rumored to be considering an initial public offering early in 2021. With momentum in its favor, the company is aiming for 20 new stores in 2022 and another 20 next year, but Rypka said expansion has been fluid because of supply-chain issues.

“What we've got to do to sort of self-correct that in the next year is basically put more deals in the pipeline than we can maybe handle, knowing that a lot of them will push and we'll still be able to get the growth rate we're looking for,” Rypka said.

He added that he likes planting a flagpole in bigger cities and then filling out the market. Recently that’s included growth into cities like Atlanta, Phoenix, Orlando and Columbus.