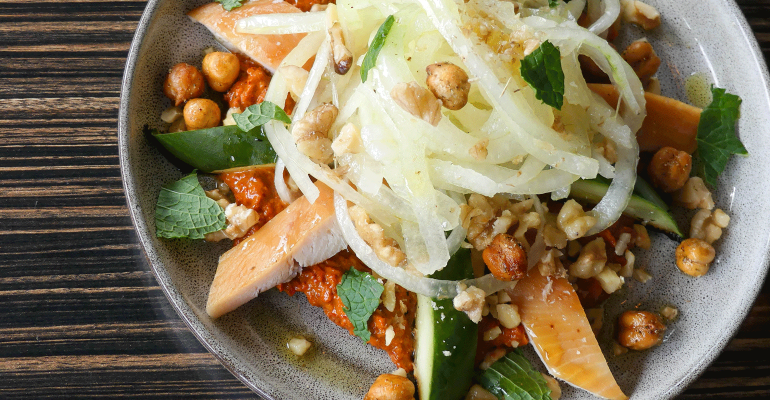 Chefs find smoked, sautéed and raw application for the fish

If you’ve been hearing stories about large amounts of trout in restaurants, it’s not an exaggerated fish tale. This season, whether smoked, sautéed, raw, or even in tater tots, this versatile fish is on menus — sometimes several times — across the country.

Among the chefs serving trout multiple ways is Bruce Bogartz of Bogartz Food Artz in Atlanta. He says he prefers trout to other standard fish, such as tuna or salmon, for its versatility.

He makes use of the fish’s versatility for his signature Trout Tater Tots, which he began making when he was a corporate chef for the Copper Cellar Corporation in Knoxville, Tenn., as a way to use up leftover potatoes from events. Now he features them with fish that he smokes in-house.

“I use boneless mountain trout from western North Carolina, which shows local color,”  Bogartz said. “I round out the flavors with sweet corn right off the cob mixed with goat cheese, rosemary, scallions and a couple of eggs.”

Another signature trout dish is Bogartz’ trout chopped salad, made with pecans, hard-boiled egg, pickled turnips, goat cheese and a horseradish vinaigrette along with the Carolina trout.

“It's because it’s so popular in our fish market, which leaves me with lots of scraps to clean good fresh meat from,” Russell said. “We aim to reduce waste in any way possible.” 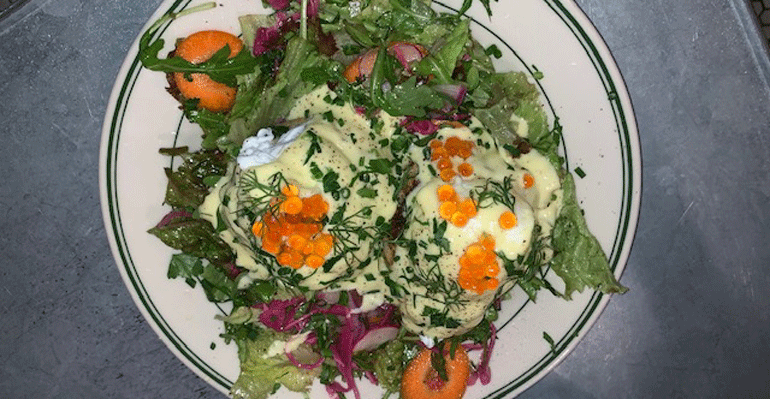 Current dishes on Russell’s menu include trout cakes made from day-old sourdough bread and steelhead trout scraps from Greenpoint’s seafood market, including the belly meat. Both the bread and the fish would have been discarded otherwise. The cakes are offered on both the lunch and dinner menus, served over greens and topped with tartar sauce. At brunch, the cakes are served as a benedict, over greens with poached eggs and hollandaise. Also offered at brunch is a smoked and cured fish platter, with steelhead gravlax, sourdough toast, capers and red onion.

“We often serve the steelhead raw in our crudo as well,” Russell said. “And I plan to use it in many spring and summer specials highlighting local and organic produce.”

Locally sourced trout and the sight of autumn corn and tomatoes being preserved for use all year long inspired John Ferguson, executive chef at The Omni Homestead Resort in Hot Springs, Va., to add a dish called Indian Corn Alleghany Trout to the menu at Jefferson’s Restaurant.

“I love cooking with rainbow trout because it is an important part of our local identity and builds on our storied culinary history,” Ferguson said. “Plus, it’s very fresh and delicious.”

Ferguson uses lightly crushed, freeze-dried Indian corn mixed with chiffonade Italian parsley to make the crust for the trout, which is sourced from a local hatchery, then quickly sautés it in olive oil.  The dish, served with japonica rice, garlic rapini and sun-dried tomato cream, is one of the restaurant’s current best-sellers.

Jeremy Sewall, chef and owner of Boston’s Row 34 and Island Creek Oyster Bar, is such a fan of steelhead trout that two years ago he spearheaded a farming program with the University of New Hampshire to grow it.

“Trout is super versatile,” said Sewall. “Raw, smoked or lightly cooked it is all good.”

Additionally, Sewall’s smoked trout pâté from Row 34 is sold in partnership with the Boston Smoked Fish Company at outlets such as Formaggio Kitchen and the Boston Public Market.

At Sababa, a modern Israeli restaurant in Washington, D.C.,  executive chef Ryan Moore serves a fiery smoked trout with muhammara, a pepper-walnut spread that Moore makes with roasted red pepper and Aleppo pepper blended with tahini, honey, pomegranate molasses, smoked paprika, walnuts and dried pita crumbs. It’s spread on the plate and then topped with smoked rainbow trout from fish supplier Duck Trap River of Maine, along with grilled cucumber and a lemon-onion salad. A sprinkling of walnuts and crispy chickpeas are added for crunch and the dish is garnished with cooling mint.

“Trout is my favorite fresh-water fish,” said Moore. “It is sustainable and delicious.”

The caption for the Greenpoint Fish & Lobster Co. photo has been updated with a more accurate description of the dish.
TAGS: Food Trends Chef Insights
0 comments
Hide comments
Related
Sponsored