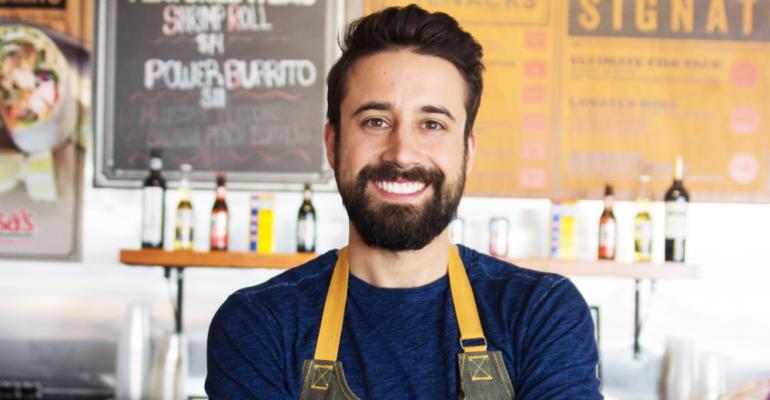 Expansion plans also include the Mid-Atlantic

Slapfish, an 11-unit fast-casual seafood chain based in Huntington Beach, Calif., is heading east and has signed on franchisees to open up to 20 restaurants in Florida.

Father-and-son team Charles and Brandon Bengel and Les Hatter, who operate 19 Five Guys restaurants in central Florida, have bought the rights to open Slapfish locations across the state. They hope to open the first location, probably in Orlando, where they’re based, in the third quarter of this year.

“We honestly were blown away by the food,” said Brandon Bengel.

He’d heard of Slapfish through former Five Guys franchisees based in Utah, who bought the rights to open locations of the seafood chain in that state as well as Colorado, Arizona, Texas and Nevada. Sustainability is top of mind at Slapfish. Pictured here is a "Pitarito."

“We have, I can’t even tell you how many prospects we’re getting through the Five Guys system,” Slapfish founder Andrew Gruel said. “This group [in Florida] stemmed from that relationship.”

Gruel said the Florida locations would use much of the same sustainable seafood supply, such as lobster and Regal Springs tilapia, that are used by the existing California, Utah and New Mexico locations and delivered through his broadline distributor, “but we’ll have the opportunity to serve a lot more off-the-dock East Coast fish off of Florida, North Carolina, South Carolina and the Mid-Atlantic,” said Gruel, who said plans were underway to open locations in the Washington, D.C., area this year, as well as Oklahoma, and probably two locations in London, England.

“We’re aggressively targeting other areas around the Mid-Atlantic/Northeast region,” he added, although those probably wouldn’t open this year.

Slapfish focuses on sustainable seafood, using suppliers such as Sea-to-Table that promise traceability of their products.

“That’s kind of a feel-good piece, that we’re helping out the fisheries as well,” Hatter said.

Slapfish has a core menu of items such fish tacos, burritos and bowls and the Clobster (crab-and-lobster) grilled cheese sandwich, but specific types of fish change frequently based on availability, and franchisees are encouraged to add items that resonate more with their customers. The Florida franchisees have hired Josh Landau, who has both culinary and operations experience, as the culinary manager for their Slapfish operations.

“We’ll have the flexibility to submit some dishes that might be more significant to the Florida market,” Brandon Bengel said.

Hatter added, “It’s a cool, fresh concept, and having the flexibility to bring some items that might be on the menu down the road is also very encouraging.”

He added that Gruel had brought creativity to the concept.

“The plate presentations are beautiful, the quality is fresh, the environment has a modern cool feel to it,” he said. “I think Slapfish cuts through a niche that isn’t out there in the marketplace. There’s not a fast-casual seafood sector right now, and hopefully Andrew’s creating it and we’re going to help him along in the state of Florida.”