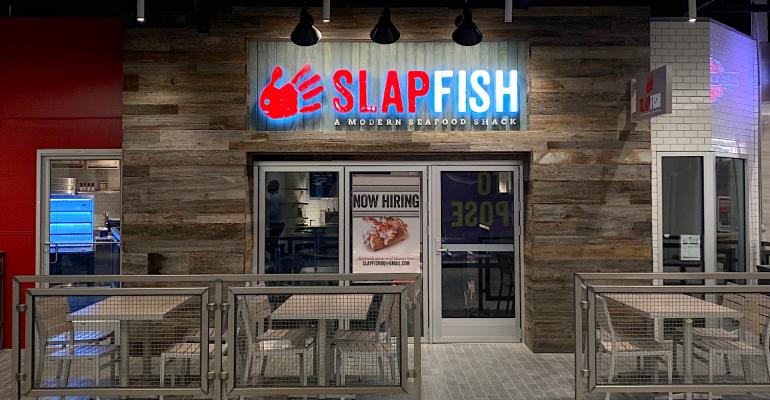 Slapfish, the fast-casual seafood brand, has drawn an investment from a Houston-based franchisee of First Watch, the company said Thursday.

Mac Haik Enterprises has invested in the parent company as well as agreed to develop the franchised units, a spokesperson said. Terms of the deal were not disclosed.

Mac Haik Enterprises is owned by Mac Haik, a former wide receiver for the Houston Oilers, the NFL team now known as the Tennessee Titans.

Slapfish was launched in 2012 by chef Andrew Gruel. The company said it planned to open four more locations by the end of the year, including one in London. Other openings are planned for: Carmel, Ind.; Pooler, Ga; and Hilton Head, S.C.

“Slapfish is truly a unique restaurant brand delivering outstanding chef-driven seafood in a fast-casual model,” said Blake Randolph, the Mac Haik Enterprises chief financial officer who works with the company’s restaurants, in a statement. “They fit our profile of brands that are relevant for today’s informed consumer and stand out from the crowd.”

A Mac Haik Enterprises subsidiary was The Egg & I’s largest franchisee when that brand merged with First Watch Restaurants in May 2015. The subsidiary, MH(FW) Restaurants LLC, operates 11 First Watch locations in the Texas cities of Austin, College Station and Houston. Another MHE subsidiary owns a majority interest in the Original ChopShop and Bellagreen restaurant brands.

Slapfish is known for sourcing sustainable seafood, both farmed and wild, and its menu features a variety of tacos, lobster rolls, sandwiches, salads and bowls. The brand was honored in 2016 with a Nation’s Restaurant News MenuMasters Trendsetter award. Gruel was on NRN’s Power List in 2017.