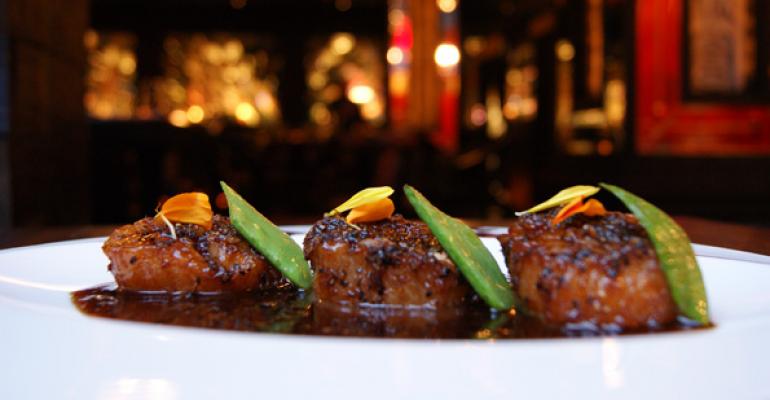 Seared scallops entr&eacute;es appear on 41 percent more menus than they did two years ago.

Shrimp has long been the top crustacean, but the scallop is the mollusk of the moment.

Seared scallops are one of the fastest-growing seafood entrées on menus, according to Datassential MenuTrends, which tracks over one million different menu items at more than 7,000 chain and independent restaurants. As an entrée, seared scallops appear on 41 percent more menus than they did just two years ago.

Scallops appear on menus in all segments but are highly preferred by fine-dining restaurants, where nearly 70 percent of menus feature scallops as an appetizer or entrée. Though long a staple on fine-dining menus, seared scallops may be getting more attention because they are a luxury item that isn’t easily prepared at home and because many diners are looking more healthful, lighter dishes when eating out, according to some chefs.

Chef Tyson Wong Ophaso of Chi Lin in West Hollywood, Calif., offers Porcupine Black Pepper Scallops, wok-seared fresh-out-of-the-shell Maine scallops that are scored and then topped with a black pepper sauce, in large part to meet the demands of his hyper health-conscious diners.

The limited availability of scallops is also appealing to diners at the modern Chinese restaurant. On a typical night with about 120 reservations Ophaso has only a dozen orders of the labor-intensive dish available for service.

“It’s a luxury … a fresh nature of the ocean. Nobody really farm-raises scallop,” said Wong. “It’s so fresh, [and] takes a long time to prepare.”

Luxury is also the appeal at Max’s Wine Dive in Austin, Texas, where executive chef Erica Beneke has been serving seared scallops with various seasonal preparations for the last two years. Beneke’s current preparation is Seared Scallops with lardo, an homage of sorts to the classic bacon-wrapped scallop, served with golden raisin puree, fresh grapes and rainbow chard.

Diners enjoy the scallops so much that Beneke says she sells more of them than any other fish dish on the menu.

Seared scallops may appeal to diners looking for healthy fare or an indulgent treat, but some chefs say it’s just a matter of classic good taste.

“They’ve always been the quintessential appetizer at nicer restaurants,” said chef Paul Virant of Vie in Western Springs, Ill., and Perennial Virant in Chicago. “People like them because they’re sweet and rich. They’re delicious.”

Virant says he has been serving scallops, mostly seared, at both restaurants for years.  At Vie he is currently offering an appetizer of Pan Seared Scallops with smoked cranberry puree, roasted cauliflower agrodolce, toasted pine nuts and wood-grilled scallion relish.

“I’ve been doing fish and foie gras for a long time. It wasn’t a stretch when I came to New Orleans,” said Tramonto. “Scallops have a depth and a richness of a meaty piece of meat to hold up to foie gras. It’s delicious.”

Versatility is another reason both Virant and Tramonto say they like the scallop.

“It’s great with everything,” says Virant. “It’s an easy protein to match with a lot of different things … fall fruits, fall vegetables, with summer vegetables, in spring with peas and bacon.”

Tramonto, who is considering serving scallops with butternut squash ravioli after Thanksgiving, says he loves the way the scallop “chameleon-izes itself.”

But fine-dining chefs aren’t the only ones enjoying playing with seared scallops. Though only a small percentage of casual-dining and midscale restaurants menu scallops, a few major chains have experimented with putting them on the menu.

For example, 190-unit Bonefish Grill has for several years been running a limited-time offer of Seared Day Boat Scallops during the spring Day Boat Scallop season. Last June, the offer featured butter-seared scallops on fresh creamed corn with jalapenos, bacon and cheese. The dish has become so popular that the chain says it plans to continue to explore additional ways to showcase Day Boat Scallops in the future.