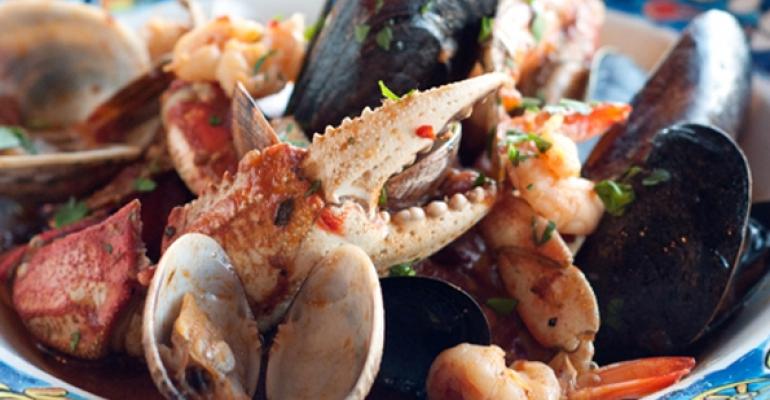 Dungeness crab season has begun, and chefs across the country are gearing up to celebrate this West Coast delicacy.

Named after a seaport in Washington state, Dungeness crabs molt between June and August and spend the next few months eating and filling up their new shells, according to a spokesman from the Oregon Dungeness Crab Commission. The crab’s meat-to-shell ratio is tested, and once it’s high enough for a consistent, high-quality product, the season is opened for commercial fishing.

In order to maintain the fishery, only male crabs with shells measuring 6.25 inches across or larger may be harvested. Those crabs are about four years old, the spokesman said.

“Around here, Dungeness crab season is like Christmas for adults,” said Matt Violante, general manager of Alioto’s restaurant in San Francisco. “Everyone calls to ask when we’re going fishing, when the season starts, so they can get it on their table.”

When the crabs are in season, Alioto’s customers eat them simply boiled in sea salt water, or marinated with garlic, parsley, cilantro and olive oil and then roasted, for about $9.50 per pound. They’ll also eat the crabs in Violante’s great grandmother’s recipe for cioppino, a Pacific Northwest version of bouillabaisse that the restaurant makes with crab, mussels, prawns and scallops in a spicy tomato broth. It is priced at $36. 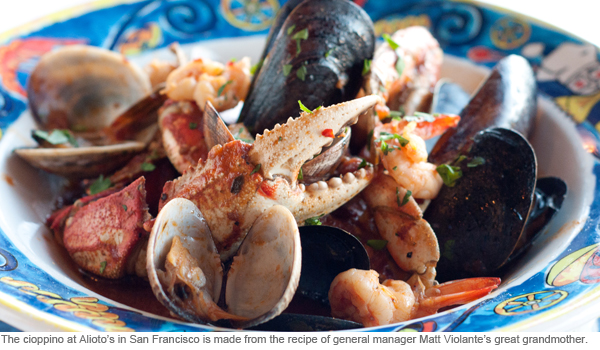 Violante reports that the crabs so far are large this year — around 2 pounds each — compared to last year, when they were closer to 1.5 pounds.

Those crabs are coming from Sonoma County or points south, as Dungeness crab season in northern waters will not likely open until Dec. 1 or later, according to the California Department of Fish and Game.

“What I like about it really is the community that it brings about, especially in San Francisco, and how it transforms celebration in a sense,” said Ruthie White, general manager of Pescatore in San Francisco.

A delicacy rich in tradition

She said the supper is inspired by the Wednesday night suppers of her youth in North Carolina, as well as the origins of Cioppino, which was made by fishermen who would bring what they just caught, cook it together and share it with bottles of wine.

At Absinthe Brasserie & Bar in San Francisco, executive chef Adam Keough is putting Dungeness crab fritters on his New Year’s Eve menu. He cooks the crab in a court-bouillon, picks the meat, and binds it together with a mousse made of raw shrimp or scallop that he mixes with fennel, tarragon, shallots, garlic, cream and egg white.

He twists that mixture in cellophane, like a sausage, and steams it. Then he cuts it into one-inch pieces, wraps it in a very thin strip of bacon and a shiso leaf, dips it in eggless tempura, and fries it until crispy. He serves it with whipped crème fraîche mixed with yuzu juice, yuzu zest and the Japanese spice mixture yuzu-kosho. Five pieces sell for $15.

“Dungeness crab is a big part of the city. I think of it as a celebratory thing” said Keough, who grew up in Boston and was raised on Maryland blue crab.

“I gained a lot more respect for Dungeness crab since I moved here,” he said. 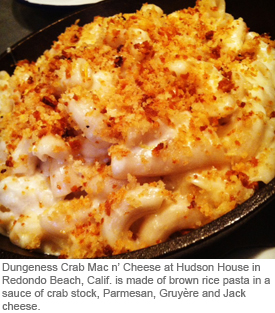 Dungeness crab is popular in southern California, too. Brooke Williamson and Nick Roberts, chefs of Hudson House, a gastropub in Redondo Beach, Calif., offer a baked Dungeness crab dip with piquillo peppers, Meyer lemon and grilled bread for $10, as well as Dungeness crab macaroni and cheese for $12.

The “mac” is actually a tube-shaped brown rice pasta, “not to keep it gluten free, because it isn’t — there is flour in the cheese sauce — but more for the texture,” Williamson said. “Brown rice pasta has a cool chewiness that we think works well with the creaminess of the sauce.”

The sauce is made with Dungeness crab stock as well as Parmesan, Gruyère and Jack cheese, and large chunks of crab leg meat are tossed into the mixture.

Dungeness crab is enjoyed elsewhere in the country, too, such as at Oceana in New York City, where executive chef Ben Pollinger makes a South Indian soup called sambar.

Normally in south India, sambar is drunk as a quick prelude to a meal, but at Oceana Pollinger combines ginger, fenugreek, coriander, tamarind, tomato, palm sugar, mustard seeds, chiles and chana dal with a 1.5-pound Dungeness crab, whose meat he heats in the sambar and then serves in the shell with basmati rice for $40.