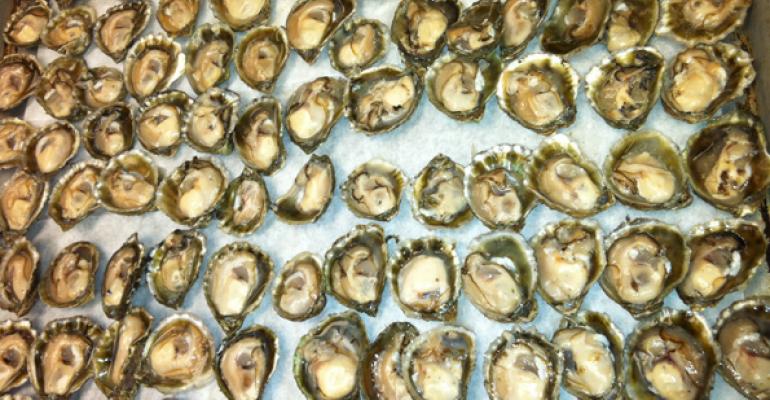 Some of the 1,200 dozen oysters consumed each day from the 14 eateries owned by Clyde's Restuarant Group.
Seafood Trends

Each week diners slurp down more than 1,200 dozen oysters at Old Ebbitt Grill in Washington, D.C., and the 13 other surrounding area restaurants owned by Clyde’s Restaurant Group. Until recently, all those oyster shells were tossed in the trash and hauled off to the nearest landfill. These days, like a growing number of restaurants, the company recycles its shells.

“The main reason we do it is because we’re such a large user of the resource,” said Bart Farrell, director of food and beverage for Clyde’s Restaurant Group. “It’s really in our best interest.”

The move to recycle shells is being driven by a growing number of nonprofit groups dedicated to restoring oyster reefs and rebuilding the oyster population, which have been diminished in recent decades by overfishing and degraded water quality, among other factors.

One of the organizations leading the movement is the Oyster Recovery Partnership (ORP), an Annapolis, MD-based nonprofit dedicated to “shellfish restoration, aquaculture and wild fishery activities to protect our environment, support our economy and preserve our cultural heritage.” In 2010, ORP launched the Shell Recycling Alliance to reclaim the thousands of shells being tossed into the trash by restaurants and catering companies and return them to the sea to be used as a home for spat (baby oysters) and to plant back in the Chesapeake Bay and tributaries.

“We realized very quickly we were going to run out of shell [and there was] no model for collecting shells from restaurants on a large scale,” said ORP executive director Stephan Abel of the creation of the Shell Recycling Alliance.

Today, ORP collects used oyster and clams shells from about 250 restaurants, catering companies and food distributors throughout Maryland; Virginia; Delaware; and Washington, D.C. Each year ORP collects between 10,000 and 15,000 bushels of shells, but it hopes to increase that number exponentially.

“It’s growing organically,” said Abel of the program. “We want to make sure we do this and we do it right.”

The newest nonprofit to get into the shell game is the Oyster Shell and Reef Restoration, created to revitalize oyster beds and provide material for coastal restoration projects in Louisiana. Starting in the fall, the organization will pick up used shells from area restaurants for curing. Shell Oil Company recently donated $1 million to help fund the program — the state’s first-ever — for the first two years, the Times Picayune recently reported.

Acme Oyster House, the New Orleans seafood icon that shucks and tosses out 9 million oyster shells a year, is among the restaurants ready to work with the start-up program. “Right now [our oysters] are going back to the dump,” said Lucien Gunter, CEO of Acme Oyster House. “We have a responsibility to restore that coastline and ensure that long-term sustainability. Imagine the barrier you can create [with 9 million oyster shells].”

While recycling oysters is good for the environment, many operators may be wondering if doing so is also good for business.

“Oysters are such an important species to a lot of the ecosystems. They provide filtering capability, habitats for other critters,” said Abel. “[It’s] not only the ecological value, but the benefits of having oysters on the menu.”

And, some say, that because of the program there are more local oysters to offer on menus.

“For a long time we didn’t have an oyster grown in Maryland on our menu. There was no local population,” said Farrell. “This was the first year we had a local oyster, [Hooper Island’s Chesapeake Gold]. Their success is a direct success of Oyster Recovery Partnership.”

Early program adopters are finding financial benefits as well. Oysters shells are heavy and therefore cost more to be hauled away by waste disposal companies; recycling reduces the load.

“The trash bill was greatly reduced by going to recycling,” said Farrell, whose company pays for trash disposal by both the number of pickups and by tonnage.

In addition, a state incentive program offers Maryland operators a tax credit of $1 for each bushel of shells recycled.

While the cost savings is great, it’s not why Acme Oyster House has chosen to recycle its oyster shells, says Gunter. “I may be able to eliminate two of our waste dumps as a result of recycling,” he said. “If I don’t save a dime in-house it’s still worth it.”