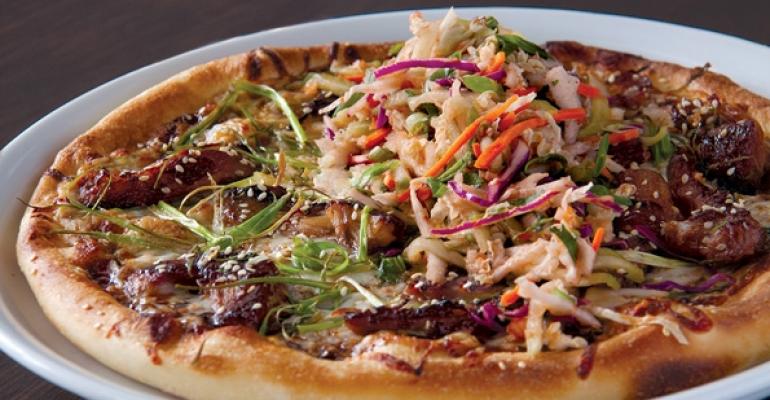 Among the biggest rollouts were Little Caesars&#39; deep-dish pizza and KFC&#39;s boneless chicken.

is introducing a deep-dish pizza in what it says is the biggest product launch in its 54-year history.

is reprising for a limited time Rip’n Chick’n, which it first introduced last year. The chicken breast, cut partly into strips, is marinated in a blend of cayenne, habanero, white and black peppers; battered; fried; and served with buttermilk ranch dipping sauce, Cajun fries and a buttermilk biscuit for $3.99. It is available through April 28.

Bahama Breeze, a subsidiary of Darden Restaurants Inc., has introduced six new rice bowls at its 33 units. They are available systemwide for $10 at lunch and $12 at dinner.

The Carnitas bowl is made with slow-roasted pork sautéed with chorizo, corn, plantains and garbanzo beans in a cumin-citrus sauce, served over yellow rice.

has introduced a Spicy Korean Barbecue Pizza and a Spring Market Vegetable Salad as seasonal offerings available through June.

The pizza is topped with charred Korean barbecue pork, slivered scallions, sesame seeds and mozzarella, and garnished with a “nontraditional” cool, spicy kimchi made with Napa cabbage, cilantro, carrots and cucumber tossed in Sriracha vinaigrette. It is available on traditional, thin or whole grain crusts for an average price of $13.50.

The Spring Market Vegetable Salad is made with field greens, purple kale, spring peas, Granny Smith apples, red radishes, cider-plumped raisins, toasted pecans, dill and mint, and is tossed in Greek yogurt vinaigrette. It is served as an entrée for an average price of $9.75.

is reprising for a limited time its Colby Jack Pub Burger in response to what it called an “unprecedented” response when it was introduced last year.

Dairy Queen’s Blizzard of the Month is the Choco Covered Pretzel. It blends chocolate-covered pretzels and chocolate chunks with peanut butter and vanilla soft serve. It’s available at all of the nearly 4,500 Dairy Queen and DQ Grill & Chill locations through April.

The Springtime Flatbread appetizer is topped with asparagus, mushrooms, melted Parmesan cheese and bacon, for $2.99.

The Asparagus Stack tops the vegetable with feta cheese and crumbled bacon for 2.99.

Seasons 52’s spring menu is available through mid-June and includes more than a dozen new items, including its first standalone quinoa dish.

The Darden Restaurants Inc. subsidiary has included quinoa in previous vegetable tasting menus, but this spring it will introduce a quinoa salad as a side dish, featuring jícama, mint and cranberries.

New burgers include a buffalo burger with blue cheese and truffle sauce, a wild prime tuna burger with Asian glaze and wasabi slaw, and a turkey burger with barbecue glaze and melted Jack cheese.

The chain has also added a grilled chicken caprese sandwich with fresh mozzarella, tomato and basil pesto to the menu, as well as a new turkey wrap with arugula, avocado and herb cheese.

Prices vary by location, but the average price for the sandwiches, burgers and tacos is $9.25. All sides are priced at under $3.50.