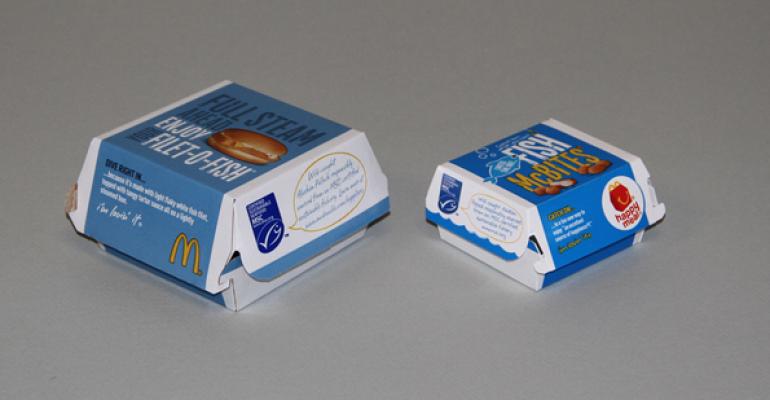 McDonald's is the first restaurant chain in the U.S. to use the Marine Stewardship Council's blue "eco-label" on all packaging.
Seafood Trends

Brand becomes first chain in the U.S. to use the Marine Stewardship Council blue "eco-label"

McDonald’s Corp. said that 100 percent of all fish sold in its U.S. restaurants as the Filet-O-Fish sandwich and the upcoming Fish McBites limited-time offer has earned certification as sustainable from the Marine Stewardship Council, or MSC.

The move will allow McDonald’s to become the first restaurant chain in the United States to use the MSC’s blue “eco-label” on all its packaging, in-store promotional material and external advertising.

McDonald’s said it has worked with the MSC, as well as other organizations like the Sustainable Fisheries Partnership and Conservation International, for 10 years to improve the sustainability of its procurement of fish. Gaining the organization’s certification means the fisheries from which McDonald’s sources its Alaskan pollock for the Filet-O-Fish and Fish McBites meet the MSC’s standards for management of the fishery, the health of the fish stocks and the impact the fishery has on its surrounding ecosystem.

“McDonald’s collaboration with the Marine Stewardship Council is a critical part of our company’s journey to advance positive environmental and economic practices in our supply chain,” Dan Gorsky, senior vice president of U.S. supply chain and sustainability, said in a statement. “We’re extremely proud of the fact that this decision ensures our customers will continue to enjoy the same great taste and high quality of our fish with the additional assurance that the fish they are buying can be traced back to a fishery that meets MSC’s strict sustainability standard.”

The company’s European division has sported the MSC’s blue label for its restaurants since 2011.

Another major purchaser of seafood, Red Lobster parent Darden Restaurants Inc., has also made major investments in sustainable sourcing, including its support for farm-raised seafood as a founder of the Global Aquaculture Alliance.

The Orlando, Fla.-based company’s sustainability manager, Brandon Tidwell, told Nation’s Restaurant News last August that seafood accounted for 31 percent of the $2.5 billion in food it procures each year. Because of Darden’s vital interest in the long-term health of the world’s seafood supply, the company has given money to seed programs for wild-caught seafood sustainability, such as its $200,000 donation in 2009 to the Atlantic Lobster Sustainability Foundation and a commitment with the Clinton Global Initiative to rebuild fisheries in the Gulf of Mexico.

Most recently, Darden became an investor in an “integrated lobster aquaculture park” in Malaysia to commercially farm a species of spiny lobster. The facility is expected to be operational in 2017, the company said, but production is not expected to reach scale for Darden’s purchasing until 2029.

McDonald’s also has identified other sustainable-sourcing and environmentally friendly targets publicly the past few years.

Last April, the company released its “2012 Global Best of Green” report that detailed 90 different eco-conscious business practices it had put into practice in its restaurants around the world, such as a system in Brazil to re-use condensation from air-conditioning units to water plants and clean exterior areas, which reduced the chain’s water usage in that country by 15 percent. In May, McDonald’s USA announced a new 10-year plan to phase out its pork suppliers’ use of gestation stalls.

The chain said Wednesday during its fourth-quarter earnings call that the Fish McBites limited-time offer would debut in February. The brand also recently introduced to its more than 14,000 U.S. restaurants new carryout bags and cups that disclose nutritional information through a quick-response, or QR, code.