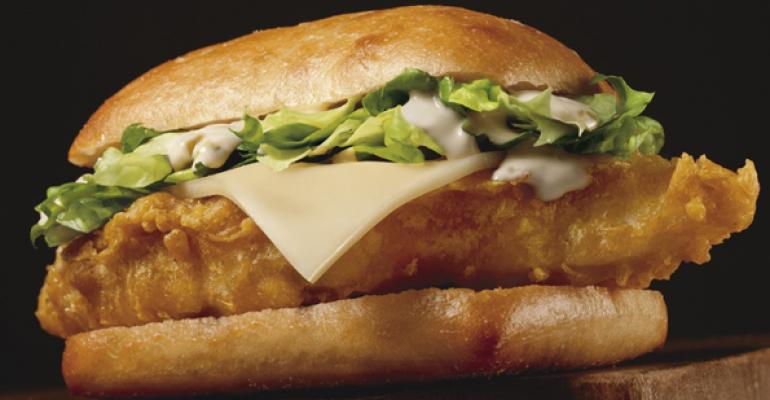 The sandwich is a permanent addition to the chain’s menu

Long John Silver’s has rolled out the Ciabatta Jack Sandwich, a new application for its signature batter-dipped fish or chicken on warm Ciabatta bread, the Louisville, Ky.-based chain announced.

The Ciabatta Jack Sandwich comes with a guest’s choice of fish or chicken on the new bread, with lettuce, melted Monterey Jack cheese, and Zesty Tartar or Baja sauce.

The item is a permanent addition to Long John Silver’s menu, but will be offered for a limited-time introductory price of $1.99, as well as in a combo with one side and a 20-ounce drink.

The sandwich is the latest of several new products introduced this year at Long John Silver’s, including an overhauled menu of signature items launched this past January and the Big Catch, which rolled out this past spring.

“Finding a truly memorable fish sandwich is tough to do,” chief marketing officer Charles St. Clair said in a statement. “We are leaving the tired buns and square fish for the competition and offering our customers delicious batter-dipped fish on warm Italian Ciabatta bread.”

Long John Silver’s latest introduction comes at a time when quick-service competitors are offering sandwiches with unorthodox ingredients or upscale choices of bread.

Wendy’s, for example, just brought back its Grilled Chicken Flatbread sandwiches, on “artisan flatbread,” which will share space on menu boards and in marketing plans with the Pretzel Bacon Cheeseburger, an offering that makes use of pretzel buns, a trend popping up in casual-dining restaurants like Ruby Tuesday as well. Burger King also recently introduced a $1 French Fry Burger.

In its bid to build up demand and trial for the Ciabatta Jack Sandwich amidst the competition, Long John Silver’s will execute a chainwide giveaway of a piece of its signature batter-dipped white fish on Sept. 19, during its “Talk Like a Pirate Day” promotion. The brand will promote the sandwich itself with a national advertising campaign that includes TV, print, social media and a national coupon drop.

Last week Long John Silver’s announced it would transition all its restaurants to trans-fat-free frying oil by the end of the year, a moved commended by the Center for Science in the Public Interest, a vocal critic of the nutritional content in the chain’s Big Catch offering.