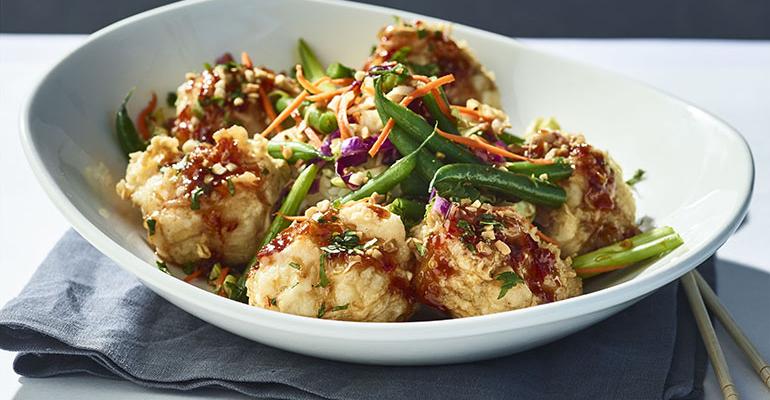 Kung Pao with a twist is trending

The classic Sichuan dish gets upgraded in new ways

Few foods come with as dramatic a backstory as Kung Pao Chicken: the Sichuan specialty that dates back to the mid-19th century. Named for the Qing Dynasty official who favored it, the dish fell from political grace during the Cultural Revolution one hundred years later, when Maoists censored its imperial past, outlawed its name and rechristened it as simply “spicy chicken” or “quick-fried chicken.”  Rehabilitated in the 1980s, it regained its former identity in China. Here in the U.S., however, its potent combination of red chile peppers and peanuts has ensured a long run of popularity uninterrupted by shifting politics or changing tastes.

Kung Pao + Protein. On the West Coast, Kung Pao Bistro claims to offer the “the best Chinese food in West Hollywood” as it cooks up its namesake dish in a variety of ways, including chicken, vegan chicken and tofu, along with a signature Kung Pao Three Musketeers dish that comprises a combination of chicken, flank steak and shrimp.

On the East Coast, Buddakan promises to “exhilarate both the eyes and taste buds” at its three locations and offers a few variations on the familiar Kung Pao dish. In the New York City and Philadelphia locations, Kung Pao Monkfish provides the sensory exhilaration , while the Atlantic City location of Buddakan offers Kung Pao Lobster.

Kung Pao + Vegetables. The assertive sauce can work wonders with a plate of vegetables, and chefs are using it more often to perk up produce. Kung Pao Greens are an option at Buddakan’s Atlantic City location, and The Plimoth, a neighborhood eatery near Denver’s North City Park, has added Kung Pao Carrots and Kung Pao Broccoli to its menu.

Kung Pao + Mashups. California Pizza Kitchen has pioneered the concept of cross-cultural menu mashups, most often using the pizza crust as a blank canvas for a range of unexpected toppings. The pasta listing is similarly multicultural, and the popular perennial Kung Pao Spaghetti has been a staple for over 20 years.

Independents are also offering surprising Kung Pao mashups. Ruka Restobar at The Godfrey Hotel in Boston features Nikkei, or Peruvian-Japanese, cuisine with some unexpected international side trips. On the room service menu, for example, Chicken Torta is a Mexican-style sandwich, in which grilled chicken on an authentic Mexican telera roll is topped with Kung Pao sauce, Japanese mayo, Peruvian Aji Amarillo, and yellow chile. By contrast, the Bao Chicka Wow Bao on the izakaya menu tops a miso chicken burger with ginger slaw, wasabi pickles and kung pao sauce, all of which are stacked in a bao bun.

Some chefs use Kung Pao to spice up Japanese standards, as with Kung Pao Ramen at Kings DE, a dining and entertainment mecca in Boston. Here, cashews stand in for peanuts, and the noodles can be topped with crispy avocado, chicken breast or shrimp. At the top of PF Chang’s sushi list is the Kung Pao Dragon Roll, made with seared ahi tuna and tempura crunch.

And the Far East and the Middle East met this summer when Black Seed Bagels — with seven stores in and around New York City — presented Kings Co. Imperial Bagel Sandwich, a limited time offer that topped a salt bagel with Kung Pao-spiced lox and cream cheese that was mixed with a Sichuan Tiger Salad of cilantro and long peppers.

Kung Pao + Convenience. Just as Kung Pao is a fixture on conventional full-service Chinese restaurant menus, it has become a standard offering in limited-service venues as well. Kung Pao Chicken is one of the Wok Smart offerings at Panda Express, which signifies items that are high in protein and low in calories.

The dish also stars in a bento box at fast-casual chain Pei Wei Asian Kitchen. Wok Box, a Canadian chain that is expanding in the U.S., promotes the Kung Pao Noodle Box as its best-selling menu item. Finally, at Angel Stadium in Anaheim, Calif. — home of the Los Angeles Angels — baseball fans can indulge in Kung Pao Drumsticks, a Chinese-American ballpark snack.