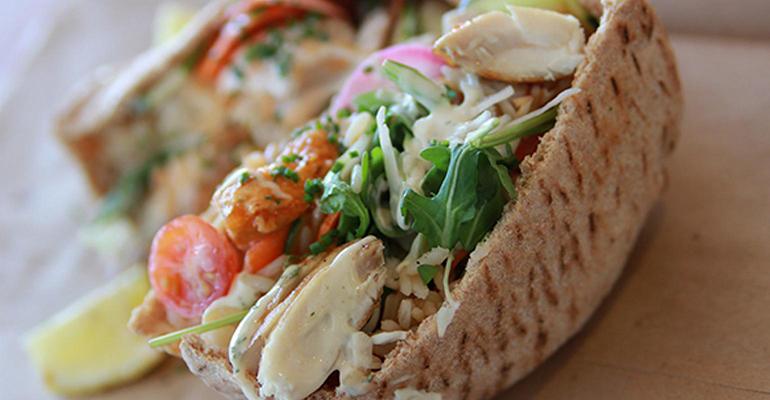 Not so long ago those who didn’t live near the water but who wanted to eat fresh seafood had to choose between expensive fine-dining restaurants or fry-it-all fast-food joints.

Now, a wave of multi-unit, fast casual seafood concepts are stepping in to fill the gap.

“We’ve seen the space grow significantly in the 12 years we’ve been around,” said Jonathan Weathington, CEO of 16-unit Shuckin’ Shack Oyster Bar. “Because consumers are being more health conscious, they’re learning there’s a lot of benefit to eating things from the ocean.”

Similarly, chef Andrew Gruel, founder of Slapfish, a 19-unit concept committed to serving sustainable species, credits the shift toward more consumption of seafood to a growing awareness of its benefits.

“I think we’re going to see a massive increase in consumption of seafood,” he said. 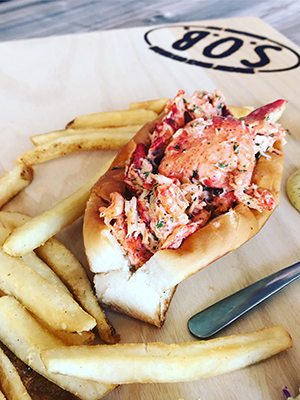 That increase isn’t only for the short term, said John Shin, CEO of Prawn, a 2-unit seafood concept in Southern California developed by fine-dining chef Mark Peel. He predicted that seafood would be the protein of choice in the decades ahead

Shuckin' Shack's first location, a 900-square-foot space in the beach town of Carolina Beach, N.C., opened in 2007, with a focus on “doing things people like [and doing them] as simply as possible,” he said.

The menu includes a best-selling lobster roll topped with a spicy mustard rémoulade, cold crab dip, fried shrimp, an oyster sampler and buckets of steaming shrimp, corn and clams, as well as a wide selection of craft beer and cocktails.

The oyster bar’s average unit volume is around $1 million and rising: Same-store sales were up by 20 percent in the first quarter of 2019, and are on track for a similar increase in the second quarter, Weathington said. He attributes the growth to repeat business and new customers brought in by regulars.

Now with locations in Georgia, Md., and S.C., as well as its home state of N.C., Weathington is looking to franchise the brand, with potential expansion to Louisville, Ky.; Nashville, Tenn.; as well as Columbia, S.C.

“Nothing is easy about growing, but the decision to grow was easy,” Weathington said.

Slapfish, based in Huntington Beach, Calif., starts with what sustainable seafood is available and then uses it in signature applications such as tacos and fish & chips.

“We search for fine-dining-quality seafood and do enough volume to do it at a fast-casual price range,” Gruel said. 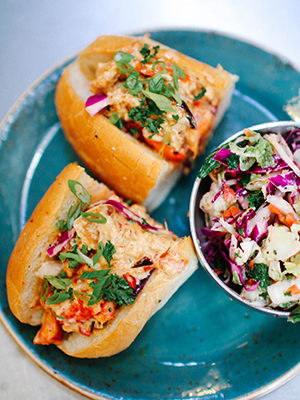 Recently, Gruel has taken inspiration from health-focused contemporaries in the segment and doing seafood riffs on popular bowls.

Gruel is also looking to expand the menu to include vegan products intended to imitate seafood. Such as plant-based tuna surrogates.

‘That’s something we want to push big time,” said Gruel. “It’s about the flavor profile and introducing an alternative protein.”

Slapfish has average unit volume of about $1.5 million, and plans are underway to continue to grow primarily through franchising. Gruel said they’re on track to grow to 30 locations by the end of the year.

He said they’re seeking out franchisees who understand the chain’s values around sustainable seafood, regardless of the market. 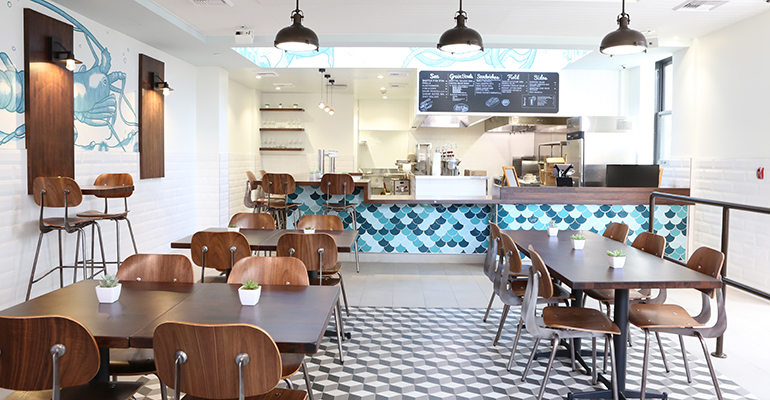 Prawn has two locations, one in Pasadena, Calif., and the other in Grand Central Market in downtown Los Angeles, with a commissary kitchen that serves both. The commissary produces most of the menu items, with nearly daily delivery to the restaurants.

Shin said the commissary model would allow Prawn to consider sites with little or no kitchen space, such as food halls.

The fine dining-inspired concept offers a menu of seafood dishes previously considered “fancy,” such as a paella with shrimp, mussels, house-made pork sausage, and a spicy chicken drumstick; Seattle fish stew with shrimp, squid, clams, mussels, salmon and bacon in lobster broth with bacon rouille served over rice; and clam chowder with bacon and potatoes in a creamy clam broth swirled with a kabocha squash purée.

“We’re trying to do something easy and delicious,” said Shin. “We want to be major players in the fast-casual space.”

May 1, 2019: This story has been updated with the correct location and opening date of the first Shuckin' Shack.